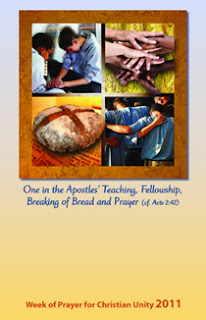 God of Light, we give you thanks for the revelation of your truth in Jesus Christ which we have received through the apostles' teaching. May your Holy Spirit continue to sanctify us in the truth of your Son, so that united in him we may grow in devotion to the Word, and together serve your Kingdom in humility and love. In Christ's name we pray. Amen.

As I was watching the opening of the new season of American Idol last evening, I was struck by not only the talent, but by the rich stories which many of the young women and men brought to their interviews: a great mixture of hopes and dreams, challenges, sorrows, and determination. That really is what the Scriptures are all about. They're a collection of many kinds of human stories about a diversity of people, from the beginning of time onward, couched in all sorts of styles and genres. The one thing they have in common, however, the common thread which ties them altogether, is the story of God's redemption, of God's working in the lives of God's creation, of God's loving each of us to life. The stories continue with each new generation of the Church, down to the present. Our lives and stories are inextricably bound up with the people who've gone before us and with the people in the world who surround us at this moment, particularly those of the community of faith in Jesus the Christ. Perhaps we're far closer than six degrees of separation! Central to our lives together is the teaching which Jesus' apostles have handed down to us through each generation. The great Anglican preacher, Herbert O'Driscoll, once described it is a chain of outwardly extended hands through the centuries, reaching out with the Word of salvation, and traceable all the way back to "the pioneer and perfecter of our faith", the One bearing the nail-prints of death and resurrection. A goodly heritage, indeed!

As your story develops, and mine, ever notice how God has the knack of nudging us into the wrong place at the right time? Fabianus or Fabian, a lay person, certainly did one day in 236 as he was "just" visiting Rome. So happens that the bishop of Rome [the Pope], Antherus, had died, and on this day the people and clergy of Rome had gathered to select a new bishop. As Fabian stood looking on in the crowd, a pesky dove flew into the scene, circling above Fabian and eventually landing on his shoulder. Well, for highly excitable Italians, in the midst of an election, this could only have been a clear sign from God that the person on whom the dove landed was the person whom they were looking forward! After a shocked pause, the cry, which couldn't have been better scripted even on a Wayne's World episode, went up: "He is worthy! He is worthy!" Before Fabian could say "Party on!" he was whisked off to be ordained to the successive degrees of Holy Orders, consecrated, and began a 17 year reign as the 21st successor of St. Peter! Pope Fabian, among the many accomplishments of his pontificate, stood out as a defender of the apostolic teaching, confronting even one of the Numidian bishops of the Church, Privatus.  He understood that the apostles' teaching, the Good News, is, as Paul calls it, "the power of God for salvation", and in Isaiah's words, "a lamp to [our] feet and a light to [our] path".  May we, as the early Church of Jerusalem, as Fabian and our other forbears in the faith, be enthusiastically devoted to the apostolic teaching.
Posted by Harry Allagree at 12:13 PM