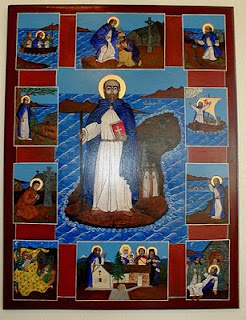 [III 19] How the brightness of angelic light was seen shining down on St Columba in church, one winter night while the brothers were sleeping in their chambers, by Fergnae, a young man of natural goodness, who by the will of God later was the head of this church that I too, though unworthy, serve.
One winter night, this Fergnae was so moved by the love of God burning within him that he entered the church alone to pray while the others slept, and the in a side chapel attached to the wall of the church he devoted himself to his prayers. Some time had passed, perhaps an hour, when St. Columba too entered the Lord’s house. With his arrival the whole church was filled with a golden light shining from the heights of heaven. Even in his shut-off side chapel, where Fergnae tried as best he could to lie concealed, the brilliance of that heavenly light came through the inner door of the chamber, which was not completely closed, and filled the room, causing Fergnae no little sense of fear. In the same way that no one is able to look directly at the sun at midday in summer without being dazzled, so Fergnae could not bear that heavenly brightness, for it was brighter than any light and completely dazzled his sight. Its radiance filled him with fear, so that his strength failed him utterly.
St. Columba prayed for a little while before leaving the church again. But on the following day he called Fergnae to him, though Fergnae was still much afraid, and addressed him with these words of comfort: "O my dear son," the saint said, "what you did last night was well pleasing in the sight of God, lowering your eyes to the ground for fear of the brightness. If you had not done so, your eyes might have been blinded by the sight of that unimaginable light. But you must take care never to reveal to anyone that you witnessed this manifestation of light so long as I live."
So it was that only after the blessed man had passed away Fergnae told the story of this praiseworthy and marvelous event to many people. I, Adomnan, who have written this account, heard it in testimony from the worthy priest Comman, who was the son of Fergnae’s sister. He had heard it first hand from his uncle Fergnae, who had himself seen the event inasmuch as his strength permitted.
(From the Life of St Columba, by Adomnan)
Posted by Harry Allagree at 11:52 AM