The Pioneers of the Episcopal Anglican Church of Brazil 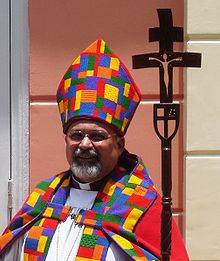 Bishop Mauricio José Araújo de Andrade
Bishop Primate of the Episcopal Anglican Church of Brazil
Anglican ministry in Brazil began as a number of chaplaincies catering to English expatriates in 1810. The first known parish, St. John the Baptist, was settled in Nova Lima, State of Minas Gerais in 1834. In 1889, when Brazil formalised the separation of Church and state in its constitution, the Anglican chaplaincies began missionary work among the Brazilian people. In 1890 Episcopal Church missionaries Lucien Lee Kinsolving and James Watson held the first service on Trinity Sunday in Porto Alegre. Shortly thereafter, three more missionaries -- Mary Packard, William Cabell, and John Gaw Meem -- joined them in their work. Today we honor these five as the pioneers of the Episcopal Anglican Church of Brazil.
In 1893, the Provincial newsletter Estandarte Cristão was first published. To this day it helps keep the widely spread Anglican congregations in touch with each other. In 1899 Fr. Kinsolving was consecrated missionary bishop in Brazil, and in 1907 the General Convention of the Episcopal Church established the missionary district of Brazil, and continued to provide bishops. Some 50 years after the Brazilian Church began, in 1940, the first indigenous clergy person, Athalício Theodoro Pithan, was made bishop. In 1965, the The Episcopal Anglican Church of Brazil became an autonomous Province of the Anglican Communion, and, by 1982, had gained complete financial independence from the Episcopal Church in the United States. The two Churches have maintained a strong relationship and participate in common mission efforts to the present.
The Iglesia Episcopal Anglicana do Brasil consists of nine dioceses, each headed by a bishop, one of whom is elected as Bispo Primaz (Primate Bishop), currently Revmº. Bispo Dom Maurício José Araújo de Andrade, who also serves as Bishop of Brasília. The 30th General Synod of the Brazilian Church (July 30, 2006) elected the current primate, elevated Amazonia as the ninth diocese of the Province and agreed on an experimental plan to group the dioceses and missionary districts of the Province into three regions.
A substantial proportion of the priests of the Province are women, but all the bishops currently are men. The president of the House of Clergy and Laity is elected at the General Synod for a three year term. The General Secretary of the Church also appointed at the General Synod for a three year term.
Posted by Harry Allagree at 11:18 PM