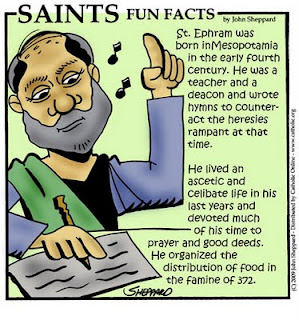 Ephrem came into the world at Nisibis in Mesopotamia; some say that his family was Christian, while others claim that it was pagan. He was baptized at the age of 18 by Bishop Jacob of Nisibis, became part of his household, and likely accompanied Bishop Jacob to the Council of Nicaea in 325, which formalized the Nicene Creed. Ephrem was ordained a deacon rather late in life, and from then on was often referred to as "Ephrem the Deacon".
When Jovianus ceded Nisibis to the Persians in 363, Ephrem and many other Christians moved to Edessa, where Ephrem lived a very ascetic life in a cave. There he completed most of his writings: exegetical works, many poems, polemics against heretics, and some 400 hymns -- over 1,000 works in all. Many of his works are difficult to translate because of their complex structures, images, wordplays, and parallels. Ephrem wrote in Aramaic and his works were translated into Latin and Greek, even while he was still living. The great St. Jerome wrote no small accolade of Ephrem: "I have read in Greek a volume of his on the Holy Spirit...I recognized in it the sublime genius of the man." Ephrem has often been called the "Harp of the Holy Spirit" or the "Harp of the Faith". Noting that the heretics of his time used songs to convey their erroneous teaching, Ephrem turned the tables and set orthodox words to the same tunes, eventually winning over the minds and hearts of people. Ephrem defended the faith against Gnostics and Arians, particularly, and against specific people, like Bar-Daisan. The last line of his Hymn Against Bar-Daisan is a real zinger!

"And if he thinks he has said the last thing
He has reached heathenism,
O Bar-Daisan,
Son of the River Daisan,
Whose mind is liquid like his name!"

Ephrem was very devoted to Mary, the Theotokos, and wrote profoundly in praise of her, and was equally eloquent in honoring the Holy Trinity and the Blessed Sacrament. His descriptions of heaven and hell are said to have inspired Dante.
In the winter of 372-373 Ephrem voluntarily ministered to the hungry, the needy, and those sick from a plague in Edessa. In doing so, he himself became a victim of the plague and died in his cave on June 9, 373.
Posted by Harry Allagree at 11:20 AM