The Bread of Life Which We Knead & We Need 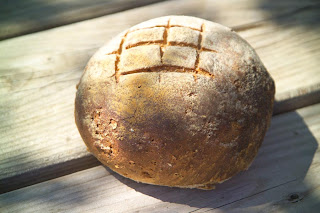 Many years ago, the artist, Corita Kent, wrote:
"We knead new bread
and we need new bread
and this can be said of the bread and of the word.
In trying to get hold of things mysterious
we try to invent something definite
and mystery can never be defined
or must always be redefined
or better yet
come at newly and indirectly
through stories and things around us..."
On the Sundays between July 26-August 23 the liturgy this year uses the 6th chapter of John's Gospel account: the longest chapter in his book. It's a discourse on bread, specifically bread which gives life and sustenance, with allusions to the Exodus experience in the Hebrew Scriptures and to Jesus, "the living bread".
Some vivid images come to mind as I think about bread. In major seminary Brother Eugene Bruggmann was the baker of weekly breads, pastries, cakes, and cookies for the whole community. Originally from Switzerland, we called him "Brother Eugen". His cookies were characteristically notoriously hard, almost as if they were stale, though they were far from that. His cookies gained particular fame as "Eugen cookies" after one wag among us actually nailed one of the cookies to the bulletin board in the basement! Nevertheless, the cookies and especially his bread and rolls were mouth-watering.
When I was a Trappist novice in Utah in 1960, one of our work tasks was to wrap bread for sale in the gift shop. Imagine the torture of doing that for a whole morning, having had a sparse breakfast! The bread was wonderful: whole-grained, fresh-baked and we were given ample portions of it in the refectory. Chapter 39 of St. Benedict's Rule says: "Let a good pound of bread suffice for each day, whether there be only one meal or both lunch and dinner..." In
combination with the good monastic coffee served, it was almost occasion enough to do continual penance for undue enjoyment!
Finally, my late good friend, Fr. Arthur Kreinheder, Lutheran monk and founder of St. Augustine's House in Oxford, MI provided happy memories of many dinners we shared together at St. Augustine's back in the '60's, at which he always served the most substantial and delicious bread.
The Gospel for today's liturgy, John 6:25-34, is situated in the second of four parts of John's Gospel, called the Book of Signs. It deals with Jesus' public ministry where, by sign and word, Jesus shows himself to his own people as the revelation of the Father, only to be ultimately rejected. In the Book of Signs Jesus alludes to the main Jewish feasts: Sabbath, Passover, Tabernacles and Dedication, and to how he is their fulfillment. This particular passage is in a section regarding Passover where Jesus makes available bread which replaces the manna of Exodus.
Throughout John's Gospel Jesus teaches by way of conversation with others, particularly with people who've missed the point of a question, action, or teaching. He leads them step-by-step from a human experience or situation to a deeper reality involving himself. In today's passage the people are amazed to find him and the disciples at Capernaum following the feeding of the 5000, and they want to know when he arrived. Their motive: they want more bread, and here's the wonder-worker who can prov

ide it. Jesus begins a conversation about bread and advises that they direct their energy to getting imperishable, enduring food which the Son of Man will give them.
Sounding very much like typical "rugged American" church people, they want to know what "works" they should be doing to accomplish this. Jesus points out: "No works: just one work -- learning to set your heart on the One whom God has sent." On this One the Father has set his seal. For Hebrews, a seal authenticated commercial and political documents, and the rabbis had a saying: "The seal of God is truth." In fact the Talmud says that one day a small scroll fell from the firmament into the midst of the Jewish law experts in the synagogue, who were weeping, praying, and fasting. They opened the scroll and it contained one word: emeth = truth, spelled with three Hebrew consonants: aleph = 1st letter; mem = middle letter; and taw = last letter. Thus God's emeth is the beginning, the middle, and the end of life. Jesus directs the peoples' spiritual search to Himself as God's life-giving truth.
Apparently that wasn't good enough for them, because now they press him for a sign. It's understandable since the Hebrews were a people of sign, rooted in a long tradition of signs and wonders being performed. They proudly remind Jesus that Moses gave them a heavenly sign in the manna which fell in the desert during the Exodus. Jesus retorts:
"Hold on a minute -- it wasn't Moses who gave the sign: it was God." "My Father," Jesus says, "gives you the true bread from heaven, bread which gives people life." Well, this sounds like a pretty good deal, and they all shout out:
"Sir, give us this bread always." Identifying himself with God, Jesus responds to their cry of hunger, "I am the bread of life."
It's an effective teaching process which Jesus uses: guiding them from physical hunger, to the beginning of a spiritual search to satisfy their inner hunger, to reflection on their religious heritage, to the person of Jesus who is the true and life-giving Bread from the Father. John the Evangelist clearly makes his point: God always feeds God's people.
Bread is a powerful sign of God's meaning for us. The "bread of life" is God's word in Scripture as well as the Word of God himself in Sacrament. Jesus is the One who sustains us. We use bread in the Eucharist for the simple reason contained in Jesus' words: "Jesus took bread, and broke it, and gave it to his disciples." And when he had said, "This is my body, given for you", he added: "Do this in remembrance of me." A simple action/sign, but an incomprehensible reality. God in Christ is our life, sustaining us; present to our life, our sorrows, our joy. His presence is as real and as wonderful as the bread which Brother Eugene and the Trappists made, or which Fr. Arthur served. Perhaps realizing that we might have difficulty in believing it, that we might not trust in mere words, Jesus took bread and wine and made them the signs by which he becomes our life and our joy.
A story is told about Fr. Daniel Berrigan, great Jesuit priest and political activist. Tired from his ministry of witnessing to the madness of nuclear war, he and his friends once went on a picnic. They enjoyed each others' company and relaxed, then celebrated Eucharist together. Gathered in a circle around bread and a cup of wine, they read Jesus' words, then passed the elements around. Daniel prayed, "You grant us this much in a time of the breaking of hearts: the breaking of bread." Jesus says, "Unless the grain of wheat falls into the ground and dies, it remains alone. But if it dies, it bears fruit." The only way for bread to be produced is if wheat is planted and "dies" and grows. In Baptism we are planted, as it were, in Christ. But suffering and death are also inevitable, else we remain alone. In our willingness to die to ourselves, we become grain, bread, for one another. Bread is good and nourishing in itself, but before it can give life it needs to be chewed and consumed.
Corita Kent again: "The Holy Communion is the Creator's act through his people of binding the wounds and healing a broken humanity. Sometimes it is a party. Sometimes it is not. But participation in it signals your desire to take on hope..."
Posted by Harry Allagree at 10:00 AM