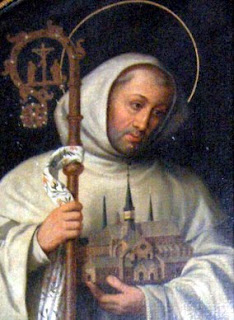 St. Bernard of Clairvaux (1090-1153) combined in his personality everything from the sublime to the ridiculous. Some of his sermons to his monks, for example, a number of them from his commentary on the Song of Songs, fairly soar to the heights in their poetic beauty and spiritual depth and inspiration. At the other end of the spectrum, poor Bernard was a mess physically and, some would say psychologically, to the point where a pit had to be dug next to his choir stall because of his propensity to barf frequently from stomach problems.
Regardless, Bernard was one of the Church's great fathers, and was even tagged as the "last of the great fathers". Dom Jean Leclercq sums Bernard up in this way:
"...Bernard had a strong personality, and we may even say a healthy personality. He gives every sign of this: self-confidence, autonomy, and freedom over against his milieu, and ability for taking decisions and initiative, a consciousness of his limitations, a perception of the world's needs, a faculty for involving himself in very diverse causes, all of them lofty. On the balance, honestly, there is more light than shadow...Saint Bernard teaches us that it is possible to be a man of God without ceasing to be a man. A saint may be a man, or a woman, who is normally without vice, but not without faults...without sins. The saint is a Christian who remains a sinner, in the unique way proper to each person's gifts and limits, the form of humility granted him at the cost of humiliations which are his own secret. If Bernard was humble in this way, everything is all right from the point of view of his relationship with God. The same God who made him aggressive also made him humble, not without Bernard himself doing his best to be less aggressive and more humble. Who dares to pass judgment on this mystery?...Bernard had known acclaim by the crowds and often approval by the great. But where he showed himself to be a saint was in the knowledge of his shortcomings, the admission of his failings, and in spite of these his faithfulness in following Christ." (Jean Leclercq, A Second Look at Bernard of Clairvaux, Cistercian Publications, 1990)
Posted by Harry Allagree at 8:44 AM