"The Most Famous of All Early Christian Martyrs" 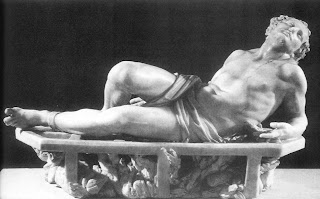 St. Laurence of Rome, Deacon & Martyr
(225 - 258)
Whether or not St. Laurence merits the title above, attributed to English writer on the saints, Sybil Harton, is anybody's guess. And does it really matter? He is, however, said to be the patron of Rome, of the poor, and of cooks.
What is for sure is that 3rd century deacon and martyr, Laurence, is certainly among the most honored and venerated of the early saints. He served as one of the seven deacons of Rome, under Pope Sixtus II, and, in fact, was the overseer of the deacons: the archdeacon. When Emperor Valerian initiated his persecution against the Christians, he singled out the clergy for early arrest, trial, and execution. Sixtus II, with whom Laurence worked closely, went to his death promising that Laurence would follow within three days. Laurence hurriedly gathered the Church's treasures, sold them and distributed the proceeds among the poor, the blind, the lame, the needy, and the disabled. The greedy magistrate, hoping for a cut of the Church's wealth, arranged a meeting with Laurence and gave him three days to deliver the "goods", which he did, only the "goods" turned out to be all these unfortunate people to whom Laurence had ministered. "These" he said, "are the treasure of the Church." Needless to say, the magistrate wasn't amused by this young 33 year old cleric. Laurence wasn't rattled, for he'd already made it clear that he was ready to die. The magistrate promised him a particularly slow death: "by inches", as he said.
Thus came to be the famous iron grate on which Laurence was fastened then placed to broil over burning embers. Some of the great Western Christian writers, Augustine, Ambrose and Prudentius among them, attest that Laurence's fervent love of Christ somehow got him through such a barbaric martyrdom. According to their recollections, Laurence quipped with those executing him: "Don't you see that my flesh is roasted enough on one side? You can turn me over now." Pretty gutsy! So impressed were some of the bystanders, including some Roman senators, that they converted rather immediately to the Christian faith. (I seriously can't imagine even this having the same impact on certain U.S. senators today - sorry!)
The Collect for St. Laurence's feast speaks of him serving God "with deeds of love", and asks that we be motivated by his example in "defending and supporting the poor, and by loving You with all our hearts" -- and that goes for senators too!
Posted by Harry Allagree at 3:12 PM