Remembering the Curé d'Ars in the Year for Priests 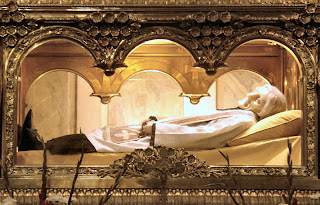 I noticed that one of my devotional "friends" from seminary days, the good Curé d'Ars, St. Jean-Marie Vianney (1786-1859), whose feast is celebrated today, was a contemporary of another of my "friends": the founder of the Missionaries of the Precious Blood, St. Gaspar del Bufalo. Both were born in the same year, although Jean-Marie outlived Gaspar by 22 years. Not surprising, because Gaspar was pretty much of a "Type A" person, given to a lot of worrying and fretting, despite his superior holiness! Both had run-ins with the government which outlawed clergy in the time before Napoleon took over and was later exiled. Jean-Marie had actually been drafted into the army, but joined others as they went
AWOL, into hiding, for several years.
St. John Vianney was certainly more low-key than Gaspar had been. He came from peasant stock, was a sheepherder, was academically challenged to the point of failing his exams right up to ordination. He just never got the hang of Latin: a big problem, given that all the seminary lectures were in the "dead" language as well as the exams. Jean-Marie was only passed on because a couple of priest friends/mentors/advocates got him a private hearing before the examiners, so that he could respond in French. He made a passable showing, enough to get hands laid upon him finally, though it was with the restriction that he could not hear confessions. It took two years before that ban was removed. Ironically, once the good Curé began to hear confessions there was a deluge, for, like, 20 years, of people flocking to him to be reconciled to God: almost 30,000 a year, including some royalty, they say! Just goes to show what some of us seminarians always said: theological knowledge was, for sure, necessary, but highly overrated. As it turned out later, he was so successful in his ministry that he was made an honorary Canon of the Cathedral, though he refused the purple robes, sold them, and gave the money to the poor. He was also was awarded the decoration of a Knight of the Legion d'Honneur by the French government, another trinket which he promptly threw in a drawer and kept locked up. So much for dependence on academics alone! St. John Vianney did instinctively what Fr. Art LeClair once advised me to do when I was fretting over having to teach freshman and senior religion in Detroit in the '60's: he said, "Don't teach them -- love them."
Throughout his ministry in the godforsaken little village of Ars-en-Dombes, St. John was particularly mindful of the reality of Christ's presence in the Eucharist, mainly because he spent countless hours in adoration before the Blessed Sacrament, before daybreak or in the evening. During his homilies, he would often turn towards the tabernacle, saying with great emotion: "He is there!" For this reason, though he himself lived in complete poverty in his peasant quarters beside the church, he was generous in embellishing the little yellow parish church. His continuous example gradually led his parishioners to take up the habit of coming to pray before the Blessed Sacrament, discovering, through the conviction of their pastor, the grandeur of the mystery of faith.
Standing only five foot two and wearing thick glasses, Jean-Marie Vianney, however, was no plastic saint. He was personally very ascetic, possibly a little more than was wise. He ran a pretty tight parish ship, forbidding dancing, immodesty, swearing, and obscenity. At one point he exclaimed: "Queen Victoria rules in England, but I rule in Ars!"
And his people "bought" it because he was totally devoted to them and to their spiritual well-being. He helped transform their lives and brought them closer to Jesus. He is, or should be, the envy of every one of us ordained clergy!
It's fitting that in March, 2009, Benedict XVI declared a Year for Priests, holding up St. Jean-Marie Vianney, patron of parish priests, as the obvious model. It's my belief that whether we clergy are Roman Catholic or not this might be a good time for us to look at our own devotedness and service to the people entrusted to our spiritual care, re-evaluate our love of Christ in the Eucharist, and make any necessary changes accordingly. There's a little Year for Priests prayer card available at: www.catholicprayercards.org/catalog/item/4235164/7034821.htm. The picture of the good Curé on the front side leaves something to be desired, but a few fitting quotations from him on the flip side make for a good closing here:
"When we go before the
Blessed Sacrament let us open our heart;
our good God will open His.
We shall go to Him; He will come to us,
the one to ask, the other to receive.
It will be like a breath from One to the other."
"The priesthood is
the love of the heart of Jesus."
Posted by Harry Allagree at 4:08 PM