Julian of Norwich & the Precious Blood of Christ 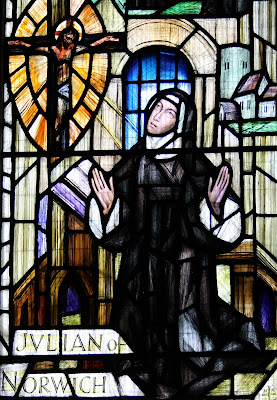 For thirteen years as a seminarian and four years as a Catholic priest, I was formed and nurtured in the theology of the Blood of Christ as a member of the Society of the Precious Blood. I must confess that the concept of devotion to the Blood of Jesus wasn't always easy for me to understand clearly. Through the years only progressively, thanks to continued education by the many gifted teachers, writers, interpreters and spiritual models within the Society, as well by others, have I come to appreciate better and experience the depths of this particular aspect of faith.

One of those guides was John XXIII (1881-1963), who was Pope for only five short years during my time in seminary. In his Apostolic Letter of June 30, 1960, On Promoting Devotion To The Most Precious Blood of Our Lord Jesus Christ, Pope John quotes the words of a verse from Thomas Aquinas' famous hymn, Adoro Te devote, a hymn, interestingly, which wasn't used publicly in the medieval Church. "How truly precious is this Blood", Pope John says, "is voiced in the song the Church sings with the Angelic Doctor (sentiments wisely seconded by our predecessor Clement VI):
'...Blood whereof a single drop has power to win
All the world forgiveness of its world of sin.' (Translation by Gerard Manley Hopkins, S.J.) Unlimited is the effectiveness of the God-Man's Blood -- just as unlimited as the love that impelled him to pour it out for us...Such surpassing love suggests, nay demands,  that everyone reborn in the torrents of that Blood adore it with grateful love..."

Pope John's reference was to a passage in the papal bull, Unigenitus  (1343), by Pope Clement VI (1291-1352). If you're not familiar with Vatican terminology, a papal bull is a written communication from the Vatican Chancery, bearing a formal papal seal. The title of a bull is its opening word(s). "Bull" is derived from the Latin bulla, referring to the seal impressed onto wax which was contained in a hemisphere of gold about the size of the eye of a bull, through which passed the ends of a gold and silver braided cord, looped through slits in the document. Such seals were used to authenticate a document because the seal could not be transferred to a forged document without either cutting the cord, which would be too obvious, or first removing the cord from the seal, which could not be done, due to knots in the cord within the wax seal, without melting the wax, thus also destroying the image impressed into it.

In Unigenitus Clement VI writes: "The only-begotten Son of God deigned to come down from his father’s bosom into the womb of his mother, in whom and from whom he joined, by an ineffable union, the substance of our mortality to his divinity, in unity of person...His purpose was in this way to redeem fallen humanity...Nor did he redeem us with corruptible things—with silver and gold but with his own Precious Blood, which he is known to have poured out as an innocent victim on the altar of the cross: not a mere measured drop of blood (which, however, because of its union with the Word would have sufficed for the redemption of all humanity) but as it were an unmeasured flood..."

Since the sixteen shewings, visions, or revelations from Our Lord which Julian experienced during her grave illness, "in the year of our Lord, 1373, the 8th day of May", as Julian notes, centered on Jesus' suffering and death, mention of his Blood is no surprise. When I became an OJN Oblate some 15 years ago, naturally I was intrigued by Julian's several references to the Blood of Christ. In Chapter 6 of her Revelations, Julian summarizes the purpose of the 1st Showing: "...to teach our soul wisely to cleave to the goodness of God." That reminded her of the current custom, when people prayed, to create "many intermediaries". She fears that this can lead us to misunderstand the full reality of our relationship as human creatures with the God of goodness and love. We often pray, she says, "by His Holy Flesh and by His Precious Blood, His Holy Passion, His dear worthy Death and Wounds, by all His blessed Human Nature...we pray to Him by His sweet Mother's love who bore Him...by His Holy Cross that He died on...and in the same way, all the help that we have from special saints and all the blessed company of heaven..." Julian even affirms that God provides such intermediaries to help us, "of which the chief and principal intermediary is the blessed Human Nature that He took from the Maid..."

Nevertheless, she says, "...if we create all these intermediaries, it is too little, and not complete honor to God", unless we acknowledge that "...all the whole of it is in His goodness, and there absolutely nothing fails." The grace of God is Godself who is goodness for us, always. The act of creating us, Julian says, is God loving us, enwrapping us in this goodness and love which God is. This is, according to Julian, an endless reality: God makes us, God keeps us, God loves us. As human creatures, we emerge in goodness and love from our beginning; we're sustained throughout our human lives in that goodness and love; and we return, at the moment of human death, to endless goodness and love. Commentator Dr. Frederick Roden puts it thus: "Here is the foundation of the incarnational process: the manifestation of goodness. Incarnation is the extension of goodness." (Love's Trinity: A Companion To Julian of Norwich, Liturgical Press, 2009, p. 23) Through Jesus the Christ, through his coming among us as a real human being as well as God's Son, God's grace, goodness, and love is held out to and embedded in our very human nature and being.

In Chapter 12 of the Revelations, Julian goes on to elaborate how the humanity of Christ, specifically his Blood, is part of the ongoing process of being "oned" in God. As she contemplates the shedding of his Blood in the 4th Showing, Julian uses the metaphor of liquid, of water, in recalling how the Creator has provided humankind with "plentiful waters" to assist us and "for our bodily comfort because of the tender love He has for us". We can think of the oceans, lakes and rivers which surround us, and their importance in the thriving of the ecosystem, the refreshment and delight they provide for our recreation, as well as the inspiration and inner images which they fire up in our spirits. "...But", Julian says, "it still pleases Him better if we accept most beneficially His blessed blood to wash us from sin. There is no liquid that is made which it pleases Him so well to give us, for just as it is most plentiful, so it is most precious (and that by the virtue of His blessed Godhead). And the blood is of our own nature, and all beneficently flows over us by the virtue of His precious love. The dear worthy blood of our Lord Jesus Christ, as truly as it is most precious, so truly it is most plentiful..."

For Julian of Norwich human nature and God's grace are of one cloth: "...for grace is God as human nature is God. He is double in His way of working but single in love, and neither of these two works without the other, nor is either separated from the other." In God the Creator we have our being; in God, through the humanity of Jesus we have our growing; and in God the Holy Spirit we have our completing.  All that has been created shares being-in-God from God who shares being/goodness/love which is Godself. In creating us God knits us to Godself; in taking flesh, through Jesus, God is knit to humankind. Thus, in our human existence you and I are made in and "oned" with the Persons of the Trinity and with Jesus the Christ.

In talking about our human nature as created by the goodness and love which God is, Julian distinguishes a "higher part" and a "lower part": in our essence or nature, we're complete; in our fleshliness, we're insufficient. Made in the image of the God, One-in-Three, Julian says that she sees no difference between the triune God and our substance, though, she clarifies, "God is God, and our substance is a creation of God. (Chapter 54) In Julian's view, human beings are "two-fold in God's creation": essential and substantial, but also fleshly and sensual. It's how we exist in the world, body and soul. It includes our embodied, spiritual nature. It's where we experience the mercy and grace of God in Christ and the Holy Spirit. Our fleshliness is God's dwelling place, the place where we're "oned" with God. Though complete in our essence, yet insufficient in our fleshliness, nevertheless Julian believes that God completes our insufficiency by mercy and grace. Though inadequate, incomplete, we're never separated from God's goodness, love, grace. Julian assures us that Christ, who knits in himself both our essence and our sensuality in a perfect balance, will restore us and make us complete by the working of God's goodness and love, embedded in our nature. And the way he effects this is through the instrumentality of his Precious Blood, the sign and symbol of life communicated. "Thus", says Julian, "when we by the mercy of God...come to harmony with both our human nature and grace, we shall see honestly that sin is truly more vile and more painful than hell, without comparison, for sin is opposite to our fair human nature!...But let us not be afraid of this...but humbly let us make our moan to our dear worthy Mother, and He shall all besprinkle us with His Precious Blood and make our souls very pliant and very gentle, and restore us to health...In the taking of our human nature He restored life to us, and in His blessed dying upon the cross, He birthed us into endless life." (Chapter 63)
Posted by Harry Allagree at 1:10 PM

It is connected in our spirits. The blog is very lifting.