A Theology Of The Heart: Nicolaus Ludwig von Zinzendorf 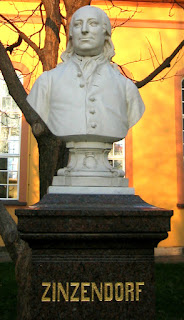 Christian hearts, in love united, seek alone in Jesus rest;
has he not your love excited? Then let love inspire each breast.

Members on our Head depending, lights reflecting him, our Sun, brethren—his commands attending, we in him, our Lord, are one.
(Moravian Book of Worship 1995: 673)

In one of the many hymns which he wrote, the stanza above reflects the "theology of the heart" which Zinzindorf espoused, as well as what it might look like if the members of the Church not only espoused it, but lived it.

Nicolaus Ludwig von Zinzendorf was born in Dresden, Saxony in 1700. His father was in the service of the Saxon Elector at Dresden, but died six weeks after Nicolaus' birth. His grandmother, Henriette Catharina von Gersdorf, a devout Pietist, assumed primary responsibility for raising Zinzendorf. She determined where he attended school, his study of law at Wittenberg in 1716 and ultimately where he lived with his wife. Erdmuthe Dorothea, sister of Count Heinrich XXIX of Reuss, and an equally devout Pietist.


In 1722 Zinzendorf purchased his grandmother's estate, Bethelsdorf, near the town of Herrnhut. The estate's tenants were remnants of a group of religious refugees from Bohemia and Moravia, the Unitas Fratrum or Bohemian Brethren.  Zinzendorf was impressed and empathized with their ideals. A successful community formed at Herrnhut and developed a rich liturgical and devotional life. It later came to be called the Moravian Church. Soon the community was at odds with the local aristocracy, town guilds and the Lutheran Church. Zinzendorf tried to stabilize the religious environment by becoming an ordained Lutheran minister in 1735, but to no avail. In 1737 the Saxon government banished Zinzendorf for eleven years.


Exile actually freed Zinzendorf. He was consecrated a Moravian bishop in Berlin, May, 1737, and immediately worked to establish new congregations in other parts of Germany, the Netherlands, England, the Baltic States, and the West Indies and New York and Pennsylvania. In 1741 he visited Pennsylvania and while there met such leaders as Benjamin Franklin, as well as leaders of the Iroquois. He was able to arrange free movement for Moravian missionaries in the area. In 1749 Zinzindorf leased Lindsey House, a large manor in Chelsea built on the estate of Sir Thomas More. He made it the headquarters for missionary work and lived there until 1755. Moravian missionary colonies had been set up in the West Indies, Greenland, among the North American Indians, in the Baltic area, among the African American slaves in South Carolina and South America, in the East Indies, in South Africa, among the Copts in Egypt, and among the Inuit of Labrador. The largest of all of his missions was Bethlehem, PA. During a Christmas Eve Service in 1742, according to legend, while singing the hymn by Adam Drese "Jesus, Call Thou Me … lowly Bethlehem", Zinzendorf was inspired to rename the settlement "Bethlehem". In 1747 the Saxon government rescinded his exile and two years later recognized the Church of the Unity of the Brethren (a.k.a. the Unitas Fratrum or the Moravians.)

He was an early advocate of ecumenism, and in the U.S. he tried to bring Protestant denominations together in the "Pennsylvania Synods". He met and developed friendships with leaders such as Cardinal Louis Antoine de Noailles, Archbishop of Paris, and the Anglican Archbishop of Canterbury, John Potter.


Zinzendorf's son, Christian Renatus, whom he'd hoped to make his successor, died in 1752 and the loss devastated Zinzendorf. Four years later, June 17, 1756, he lost his wife, Erdmuthe Dorothea, who had been his counselor and confidante in all his work. After living as a widower for a year, Zinzendorf remarried a second time in June, 1757, to Anna Caritas Nitschmann  21 May 1760), with whom he'd been very close for many years, since Anna had for years been the spiritual leader of the movement's women. Three years later, Zinzendorf fell ill and died on May 9, 1760, leaving Bishop Johannes von Watteville, who had married his eldest daughter Benigna, to take his place at the head of the community. Zinzendorf's wife, Anna, died only a few days later on May 21.


Nicolaus von Zinzendorf lived his "heart religion", discovered early on, and it well characterized his life and ministry. He once made the statement, "All life becomes a liturgy." In other words, anything that you and I do, even the most lowly or mundane kind of work, can serve as an act of worship.