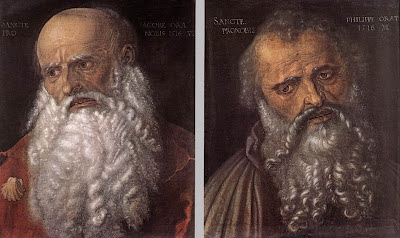 Almighty God, who gave to your apostles Philip and James grace and strength to bear witness to the truth: Grant that we, being mindful of their victory of faith, may glorify in life and death the Name of our Lord Jesus Christ; who lives and reigns with you and the Holy Spirit, one God, now and for ever. Amen.

St. James the Less, "son of Alphaeus", is one of the obscure Apostles whose only apparent notability is that he may have been the one who stood with Jesus' women followers as they witnessed the Crucifixion. We can only guess the impact it must've had on his life. Quiet, humble discipleship and contemplation of the cross: like so many of Christ's followers today.

St. Philip could perhaps be called a "homie" with Andrew and Peter, since they all came from Bethsaida. He's a good example of the "E" word: evangelism. Philip had a friend, Nathanael, with whom he excitedly spoke about Jesus, who'd just invited Philip to be one of his band of brothers. I suspect they were probably good friends because they seem to have shared the trait of being forthright and of speaking their minds. Nathanael's famous, almost adolescent, put-down has come to us through the centuries: "What good can come from Nazareth?" What good, indeed! He soon found out. Periodically throughout the Fourth Gospel Philip pops up letting everyone, including Jesus, know what he thinks. When Jesus urges the Apostles to provide food for the hungry crowd, Philip points out that "Two hundred denarii wouldn't buy enough for each of them to have just a little...Are you kidding me?!" Jesus wasn't kidding. In John 12 some Greeks approach Philip, asking for an interview with Jesus. Philip respectfully subdelegates the request to Andrew, then the both of them go and tell Jesus. Unfortunately, the writer of John leaves us hanging and we don't know if the Greeks ever got in to see Jesus or not. Finally, at the Last Supper Jesus is giving a lengthy spiel about "the Father". Having misread Jesus, along with the other 11, for all the years they've been with Jesus, Philip blurts out: "Lord, just show us the Father, and we'll be satisfied." Probably struggling not to roll his eyes, Jesus patiently and gently explains to Philip, once again, step by step, how it is between Jesus and the Father and them.