A Conversation With The Venerable Monk of Jarrow 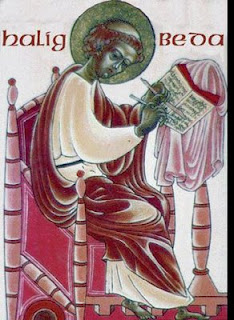 For some time, blessed Venerable Bede of Jarrow, I've had what could be called a "quiet" devotion to you. Today I read again the last sentence of the Preface to your History of the English Church and People, written for King Ceowulf and completed in 731: "I earnestly request all who may hear or read this history of our nation to ask God's mercy on my many failings of mind and body. And in return for the diligent toil that I have bestowed on the recording of memorable events in the various provinces and places of greater note, I beg that their inhabitants may grant me the favor of frequent mention in their devout prayers." I'm sorry to confess, dear Bede, that I'm conscious of that wish mostly on the yearly celebration of your feast day. Nevertheless, there are other periodic reminders, and at least today I did pray, not for any "failings" of mind or body, but in thanksgiving for your humble life all those years there at Jarrow, for the immense contribution you made as holy monk, a writer, a scholar of history, and as an observer, a commentator, a man sensitive to the human and spiritual lives of the women and men of the Church and of the world of your time. One thing I believe we share in common is a deep connection to the Communion of Saints.


As I read that sentence above, I pick up hints of what you might have been like. Obviously you probably expected that people would "hear [and] read this history". Your humility, nevertheless, is apparent, though I have to tell you, Bede, there's hardly been a author I've ever read that hasn't praised others for making their book possible and wonderful, but have taken on themselves responsibility for any "failings". Maybe that's just something authors do,   have always done, maybe even before you! You mention the "diligent toil" which went into your history, and who could argue with that after reading it. You probably already know this, but I can tell you now that it was all worth those years of hard work. It ain't perfect, and that's not just my opinion; there are gaps, again, as you're probably already well aware. But we're so very thankful for what you've given us. I thought of this when I visited your tomb at Durham Cathedral in May, 2007. You may have heard me clunk my copy of the History down on the tombstone as I knelt down. I brought the book along on the trip specifically so that, in actually touching it to your tomb, I could take home some tangible connection to you. What you wrote about St. Hild (Hilda) was also valuable as background for our visit to the abbey at Whitby on another part of that same trip. I don't suppose you two ever met, which is a shame because what a session that would've been!  You could probably have filled us in on a few more facts from her life and work.


I would love to have been with you there at Jarrow as a quiet observer each day when you were doing your research, poring over those old manuscripts, writing by candlelight. I'm guessing that, as you put all this together over the years, you must've thought, while at prayer, about all the folks you were writing about. I wonder how that shaped what you finally wrote about them. There were probably a few over whom you gritted your teeth! Were there times you had writer's block? Seems only natural that you would've had those times. But I'm guessing you were monastically grounded enough to have dealt with that patiently. And how in the world did you manage to write so much other stuff?! I mean, a work the size of the History would've been legacy enough for most people, but you were a virtual manuscript machine! Again, we're truly grateful. Even if we don't read all of them!


Your plea above for your hearers/readers to make "frequent mention in their devout prayers" again tells me how connected you were to the outside world and to the Church, how you realized that monastery walls were no barrier to the shared aspirations, dreams, hopes and prayer to your contemporaries or to us who would follow you, even many centuries later.
When our pilgrimage group toured Lincoln Cathedral on the trip in 2007, our guide was a wonderful man named John Campbell. His tour was very rich in information and exciting, mainly because he was so enthusiastic about his task. At one point, we learned that he was from...are you ready for this?...Jarrow! He had nothing but good to say about you, by the way.  In fact, he fairly glowed as he spoke about you and about how happy he and his family were to live in the same place that you blessed by your presence for over 60 years.


I hope that, as you asked all us, like John, who followed you to pray for you, that you're also returning the favor. There's really no doubt in my mind that you are. That said, I'm going to sign off here, using a prayer that you yourself composed and probably said everyday.

"I implore you, good Jesus, that as in your mercy
you have given me to drink in with delight the words
of your knowledge, so of your loving kindness you will also
grant me one day to come to you, the fountain of all wisdom,
and to stand for ever before your face. Amen."