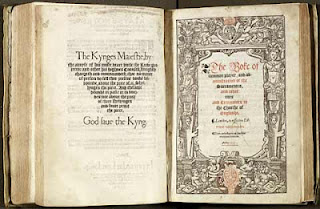 The full name of the 1662 Book of Common Prayer is The Book of Common Prayer and Administration of the Sacraments and other Rites and Ceremonies of the Church according to the use of the Church of England together with the Psalter or Psalms of David pointed as they are to be sung or said in churches and the form and manner of making, ordaining, and consecrating of bishops, priests, and deacons.


Parish worship in the late medieval church in England, which followed the Latin Roman Rite, varied according to local practice, and thus used a local form or "use". The most common was the Use of Sarum, found in Southern England. The Sarum Rite wasn't collected into a single book; rather the forms of service that were to be included in the Book of Common Prayer were drawn from the Missal for the Mass, the Breviary for the Daily Office, the Manual for the occasional services, baptism, marriage, burial etc., and the Pontifical for the services appropriate to a bishop: Confirmation and ordination.


Thomas Cranmer (1489-1556), Archbishop of Canterbury first during the reign of Henry VIII, then during that of his son Edward VI, was largely responsible for producing books in English for use in the liturgy. In his early days Cranmer was somewhat conservative, an admirer, though a critical one, of St. John Fisher (c. 1459-1535), an English Roman Catholic scholastic, cardinal, and martyr. It may have been Cranmer's visit to Germany in 1532, where he secretly married, which began the change in his thinking. As Henry began diplomatic negotiations with Lutheran princes, Cranmer came face to face with a Lutheran embassy c. 1538. The Exhortation and Litany, the earliest English-language service book of the Church of England, was the first overt tip-off as to his changing views. His was not a mere translation from the Latin: its Protestant character is made clear by the drastic reduction of the place of saints. It borrowed substantially from Martin Luther's Litany and Myles Coverdale's New Testament, and was the only service to be finished within King Henry VIII's lifetime that might be considered to be "Protestant".


It wasn't until Henry VIII's death in 1547 and the accession of Edward VI that a revision could proceed. Cranmer finished his work on an English Communion rite in 1548, obeying an order of Convocation of the previous year that Communion was to be given to the people under both elements of bread and wine. The ordinary Roman Rite of the Mass had no provision for any congregation present to receive Communion. Cranmer, therefore, composed in English an additional rite of congregational preparation and Communion, based on the Sarum rite for Communion of the sick, to be undertaken immediately following the Communion of the celebrant, in both elements.


A year later, in 1549, this Communion service was included in a full prayer book, set out with daily offices, readings for Sundays and Holy Days, the Communion Service, Public Baptism, Confirmation, Matrimony, The Visitation of the Sick, and Burial. The Ordinal was added in 1550. The Preface to this edition, containing Cranmer's explanation as to why a new Prayer Book was necessary, began: "There was never anything by the wit of man so well devised, or so sure established, which in continuance of time hath not been corrupted." Although the Prayer Book is commonly attributed to Cranmer, the details of how it was developed are obscure. A group of bishops and divines, both conservatives and reformers, met first at Chertsey, then at Windsor in 1548, agreed only that "the service of the church ought to be in the mother tongue". Cranmer collected the material, including the above-mentioned Preface, from many sources. He borrowed much from German sources, particularly from work commissioned by Hermann von Wied (1477-1552), Archbishop-Elector of Cologne, as well as from Andreas Osiander (1498-1552), a German Lutheran theologian, to whom he was related by marriage. The Church Order of Brandenberg and Nuremberg was partly his work. Many phrases are characteristic of the German reformer Martin Bucer (1491-1551), or of the Italian theologian, Peter Martyr Vermigli (1499-1562), who was staying with Cranmer at the time of the finalising of drafts, or of his chaplain, Thomas Beccon (c. 1511-1567), one of the "Six Preachers of Canterbury". Nevertheless, Thomas Cranmer gets the credit for the overall job of editing the Book and its overarching structure including the systematic amendment of his materials to remove any idea that human merit contributed to their salvation.


The 1549 Prayer Book dispensed with the Latin, and with all non-biblical readings. It set up a rigorously biblical cycle of readings for Morning and Evening Prayer, according to the calendar year rather than the ecclesiastical year, and a Psalter to be read consecutively throughout each month. Cranmer provided that the New Testament, other than the Book of Revelation, be read through three times in a year, while the Old Testament, including the Apocrypha, would be read through once.


The Book of Common Prayer was introduced on Whitsunday, 1549, after considerable debate and revision in Parliament. There is, however, no evidence that it was ever submitted to either Convocation. Neither reformers nor their opponents were pleased with it, indeed the Catholic Bishop Gardiner could say of it was that it "was patient of a Catholic interpretation". It was clearly unpopular in the parishes of Devon and Cornwall where, along with severe social problems, its introduction occasioned some of the "commotions" or rebellions in the summer of that year, partly because many Cornish people lacked sufficient English to understand it. The banning of processions and the sending out of commissioners to enforce the new requirements were particularly disliked. Apparently there was also opposition to the introduction of regular congregational Communion, partly because the extra costs of bread and wine would have to be paid by the parishes. Mainly, however, there was intense resistance to making part of regular worship a religious practice previously associated with marriage or illness.


Given this history, can we be surprised that, since 1549, there have been multiple revisions of the Book of Common Prayer, both in the Church of England and in the Episcopal Church here in the U.S. To quote Thomas Cranmer again: "There was never anything by the wit of man so well devised, or so sure established, which in continuance of time hath not been corrupted."
Posted by Harry Allagree at 5:00 PM

Acceptance of the 1549 BCP was never broad and easy. In the north, the laity chased their priest with pitchforks to make him revert to the Latin. In Exeter a priest gathered an army of 800 and laid siege to the city in opposition to the BCP. (The king sent his army and that priest was hanged in his vestments from a gibbet built on the roof of his church—and his body was left hanging for four years in case any one else decided not to use the 1549 BCP!)