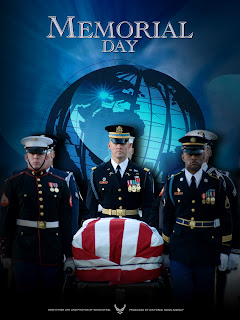 Memorial Day is an annual federal holiday observed in the United States on the last Monday of May. It's a day for remembering the men and women who have given their lives while serving in the United States Armed Forces. Formerly called Decoration Day, it originated after the American Civil War to commemorate the Union soldiers who died in the Civil War, but by the 20th century it had been extended to honor all Americans who have died in all wars. It typically marks the beginning of the summer vacation season, just as Labor Day marks its end. It's common for folks to visit cemeteries and military memorials, particularly to honor those who have died in service. In many places across the country, volunteers place American flags military graves.

By the early 20th century, Memorial Day was an occasion for more general expressions of memory, as people visited the graves of their deceased relatives in church cemeteries, whether they had served in the military or not. Annual Decoration Days for particular cemeteries, especially in the American South, are held on a Sunday in late spring or early summer, notably in the mountain areas. Oftentimes, in family graveyards where long-deceased ancestors, as well as those more recently deceased, are buried, this becomes an occasion for an extended family reunion to which some people travel hundreds of miles. The people gathered put flowers on graves and get reacquainted with kinfolk and others. There's often also a religious service and a "dinner on the ground," i.e., a potluck in which people spread dishes out on sheets or tablecloths on the grass. This practice probably began before the Civil War, and so may reflect the real origin of the "memorial day" idea.

The holiday's name gradually changed from Decoration Day to Memorial Day, first used in 1882, but not more common until after World War II. It was declared the official name by Federal law only in 1967. On June 28, 1968, Congress passed the Uniform Monday Holiday Act, moving four holidays, including Memorial Day, from their traditional dates to a specified Monday in order to create a convenient three-day weekend, a concept not entirely acceptable to many. The law moving Memorial Day from its traditional May 30 date to the last Monday in May took effect at the federal level in 1971. After some initial confusion and unwillingness to comply, all 50 states adopted Congress's change of date within a few years.

Scholars, following the lead of sociologist Robert Bellah, often hold that the U. S. has, in effect,  a secular "civil religion", one not associated with any specific religious denomination or viewpoint, which has incorporated Memorial Day as a sacred event. A sense of corporate and individual obligation to carry out God's will on earth, at least theoretically, is a theme lying deep in the American psyche. With the Civil War, a new theme of death, sacrifice and rebirth entered the civil religion. Memorial Day gives ritual expression to many of these themes, heightening in the local citizenry a sense of nationalism. The American civil religion has generally borrowed from different religious traditions, so that the tension between the two is minimally apparent. Nevertheless, the gravitation towards more evangelical and fundamentalist influences in recent years, blending personal motivation with attaining national goals, has been and should be cause for concern.

O Judge of nations, we remember before you with grateful hearts
the men and women of our country who in the day of decision
ventured much for the liberties we now enjoy. Grant that we may
not rest until all people of this land share the benefits of true freedom
and gladly accept its disciplines. This we ask in the name of
Jesus Christ our Lord. Amen.
Posted by Harry Allagree at 12:41 PM