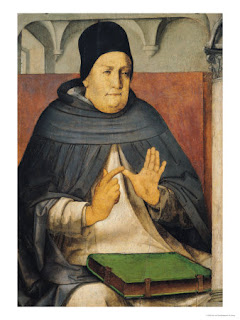 During our six years in the major seminary we spent more hours than I care to remember perusing and discussing the Summa Theologica of St. Thomas Aquinas (c. 1225-1274). As often happens, after you've hopefully grown in age, wisdom and grace you begin to appreciate things, like Thomas' writings, which once seemed dull, dry and uninteresting a whole lot more.
Revisiting the Summa this morning, I was particularly struck by Thomas' very first words in the foreword of this monumental work:
"Since it is the duty of a teacher of catholic truth not only to build up those who are mature in their faith, but also to shape those who are just beginning...so the declared purpose of this work is to convey things that pertain to the Christian religion in a way that is readily accessible to beginners.
We have noticed that newcomers are invariably put off reflecting more deeply upon their faith by various writings, intimidated partly by the swarm of pointless questions, articles, and arguments, but also because essential information is being communicated under the constraints of textual commentary or academic debate, rather than sound educational methods, and because repetition breeds boredom and muddled thinking.
Eager, therefore, to avoid these and similar pitfalls, and trusting in the help of God, we shall try in this work to examine the claims of Christian teaching, and to be precise and clear in our language as far as the matter under discussion allows...
It is clear that Christian teaching employs human reason, not so as to prove anything because that would undermine the merit of believing, but rather in order to elucidate the implications of its thought. We should note that just as grace never scraps our human nature, but instead brings it to perfection, so in the same way our natural ability to reason should assist faith as the natural loving inclination of our will yields to charity."
The astounding thing about the Summa, which, unfortunately, didn't seem to register with me years ago, is that Thomas wrote it for beginners! And his avowed purpose in writing it is to present a "precise and clear" examination of what Christianity claims to teach. I don't get the impression, as perhaps I once did, that Thomas was simply a theological "authority" who was attempting to lay out the Church's "dogma" for people to accept, or else. He speaks about "discussion", about using "our natural ability to reason" to elucidate what we hold in faith. I suspect that Thomas always saw his work as but one interpretation of the Church's teachings: not the definitive statement for all time. Thomas also betrays the sign of a good teacher, I believe, in observing that "grace never scraps our human nature".
Looking back at the end of his life, Thomas is said to have considered his many writings as but "straw". We probably see that judgment as a bit severe, but it's understandable for a writer who realizes that one's thinking and insights change over time, who recognizes mistakes, perhaps. It also betrays Thomas' great humility and deep awareness of his relationship with Christ. He could never have imagined how many lives he would touch, not only by the Summa Theologica, but also by the other writings and hymns which he left us. Pretty good for a guy who'd been dubbed the "Dumb Ox" in his earlier years!
Posted by Harry Allagree at 10:53 AM