The Gentleman Doctor of the Church 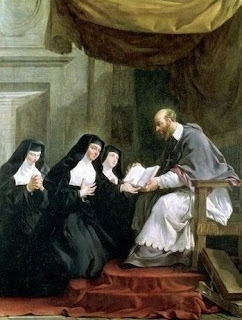 "The measure of love is to love without measure." (Treatise on the Love of God) Those words of St. Francis de Sales (1567-1622) could very well sum up the whole of his life.

Francis Bonaventura was born at Château de Sales (Thorens) in Swiss Savoy to a noble family. His father was François de Boisy, a name he took upon receiving the dowry of the Signory de Boisy from Francis' mother, Françoise de Sionnz. Francis was the eldest of twelve children. Early on, he was educated by his mother, and later, by Abbé Deage, his tutor. He loved books and knowledge, and clearly was drawn to things spiritual. He attended the college at Annecy, and there took the tonsure at age 9. His father, in 1578, when he was 12, sent him to the Collège de Clermont at the University of Paris, where he remained for six years. Between 1579 and 1587, Francis suffered from severe scruples and depression resulting in his becoming convinced that he was damned to Hell. He became physically ill and was even bedridden for a time. The intellectual and emotional
upheavals of university life in Paris at that time may also have contributed to his inner turmoil. Judging from his later gentle personality, one would never guess the storms raging within him, battering and driving him, at the age of nineteen, to the brink of despair and thoughts of suicide. Francis contemplated a plunge into the waters of the Seine to end it all.

At this point he was inspired to visit the shrine of the famous Black Virgin of Paris, Notre-Dame de Bonne-Délivrance. 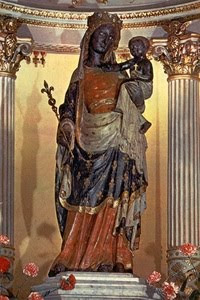 The lovely old statue is still in Paris, in the chapel of the motherhouse of the Sisters of Saint Thomas of Villanova at Neuilly. After praying at the shrine, his depression and anxiety gradually lifted and he dedicated his life to God.
The Scriptural reality of the words "God is love" assured Francis that whatever God had in store for him would be good. His faithful devotion to the God of love not only expelled his doubts, but also influenced his teaching the rest of his life. In 1608, Francis wrote his best known work, the Introduction to the Devout Life, a small collection of short practical lessons on true piety and everyday living, for his cousin by marriage, Madame de Chamoisy.
In 1588, Francis transferred from the University of Paris to the University of Padua in Italy, where he spent four years studying law and theology, earning a doctorate in 1592, which certified him for both. Intelligent and handsome, Francis withstood his father's continual efforts to have him marry and establish a secular career in the Senate of Chambéry, and chose instead a life in religion.
The intervention of Claude de Granier, Bishop of Geneva, led to Francis' ordination as a priest in 1593 and to his appointment as provost of the cathedral chapter of Geneva. Since the beginning of the Protestant Reformation, the seat of the Catholic bishops of Geneva were located at Annecy in Savoy, France, because of Calvinist control of the city of Geneva. Francis, in his capacity as canon provost, engaged in a serious ministry of evangelism among the Protestants of Savoy, apparently persuading many to return to the "Old Faith" (Catholicism).
Bishop de Granier had made no bones all along that he wanted Francis as his coadjutor bishop, though the latter resisted. To that end he sent Francis to Rome where Pope Clement VIII suggested that Francis be examined in theology. An impressive group of theologians, including Cardinal (and later St.) Robert Bellarmine, gathered to hear Francis' responses to 35 theological questions. Francis handled them simply, modestly and with clear evidence of profound understanding. Pope Clement embraced and congratulated him, and arranged for his appointment as coadjutor bishop of Geneva. Bishop de Granier also sent Francis to Paris to forge alliances with King Henry IV, who held Francis in high esteem and even tried to persuade him to remain in France. Francis begged off, referring to his need to return to "my poor bride", as he called his mountain diocese.
Bishop de Granier died in the autumn of 1602 and, and Francis succeeded him as Bishop of Geneva. During his years as bishop, he proved to be a spellbinding preacher as well as an ascetic figure; he was known as a friend of the poor, a man of almost supernatural affability and understanding. These last qualities come through wonderfully in his famous books. He is said to have devised a form of sign language for a poor deaf man in order to communicate. Francis' brother, Jean-François de Sales, was also consecrated a bishop, in 1621, and appointed coadjutor to his brother in the diocese of Geneva.
For sixteen years Francis shared a close friendship in his ministry and a prolific correspondence with Jeanne Françoise Fremyot, baroness of Chantal, whom we know as St. Jane Frances de Chantal. Along with Francis, she co-founded the Order of the Visitation of Holy Mary at Annecy in June, 1610. [As a personal historical note, the only woman I've known who was named after her was my Grade 8 teacher, Sister Jane Frances, SND.]
Francis was active in his teaching and preaching ministry right up to the end of his life. Returning from a trip with Charles Emmanuel I, Duke of Savoy, to meet with King Louis XIII at Languedoc, he was forced to stop at Lyons, worn out and ill, and was put up in a cottage by the sisters at the convent of the Visitation. He remained there for a month, preaching, giving the nuns instruction and spiritual guidance. He died on December 28, 1622, at age 56 and in the 20th year of his episcopate. He was buried in Annecy in 1624 where his body still rests today in the basilica. The relic of his heart was kept at Lyons, but was moved during the French Revolution to Venice where it is venerated.
Francis de Sales was beatified in 1661 by Pope Alexander VII, who also canonized him a saint three years later, in 1664. Pius IX declared him a Doctor of the Church in 1877. In 1923, Pope Pius XI proclaimed him a patron of writers and journalists, because of his books and letters.
With the death of J. D. Salinger this week, I'm wondering what an interesting conversation and comparing of notes he might be having with Francis de Sales!
Posted by Harry Allagree at 2:43 PM