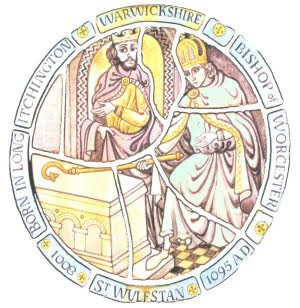 Did you know that St. Wulfstan is the patron of vegetarians and dieters? Yep! Legend has it that Wulfstan became distracted one day, while celebrating the Eucharist, with the smell of meat roasting in the kitchen. From that day, it is said, he vowed never to eat meat again. His whole life's story, spanning 87 years, is most interesting, and I recommend that you read Fr. John Julian's account in his book, Stars In a Dark World, pp. 31-34.
Born around 1008-09, Wulfstan was educated in monastic schools, entered religious life, was ordained priest, joined the Benedictines at Worcester Cathedral, and remained there in the capacities of master of the boys' school, cantor, sacristan, and prior until 1062 when he was consecrated Bishop of Worcester. As bishop he carefully and gently nurtured both Church and State through the transition from Anglo-Saxon to Norman rule. He died at Worcester in 1095.
Here is just a hint of what he was like as a person, taken from William of Malmesbury's The Life of Wulfstan:
"Having been consecrated a bishop, Wulfstan immediately turned his mind to works of piety...He loved preaching, and always spoke about Christ, resolutely setting Christ before his hearers so that even the most reluctant might hear his name. In his personal discipline, in vigils and in fasting, he was no less rigorous. His prayers assaulted heaven...
Wulfstan maintained a balanced life, never relinquishing his two-fold calling. Although bishop, he remained obedient to the discipline of the monastic life: as a monk, his way of life revealed the authority of a bishop. His integrity singled him out from his contemporaries. To any who came to him for counsel, he was full of wisdom and accessible... He would never seek the patronage of the rich or reject the poor for their poverty. He was unmoved by flattery... When he was praised for a good deed, Wulfstan praised the grace of God that had made it possible...His heart was always glad and his face bright...He built many churches in the diocese...Foremost among these was the cathedral church of Worcester...The number of monks in the cathedral monastery increased and he brought them under the Rule of the Order..."
Posted by Harry Allagree at 2:35 PM