The Searcher, The Darling, The Friend of Truth 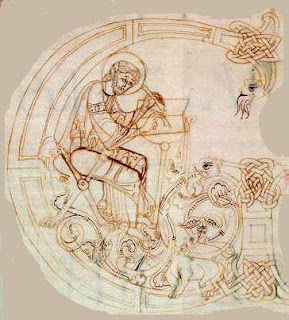 It struck me this morning that St. Hilary, St. Kentigern (or Mungo), and George Fox, all of whom we commemorate today, had a notable thing in common: their passionate pursuit of God who is Truth.
Hilary of Poitiers was, perhaps, an unlikely candidate for acclaim in the Christian Church. Born in c. 315 into polytheistic paganism, he was as a lawyer and orator, proficient in both Latin and Greek. He married and had a daughter. His quest for Truth led him out of Neoplatonism to belief in the Christian God, and he was baptized at the age of 30. Popular acclaim of the people of the diocese of Poitiers "steamrolled" him into becoming a deacon, priest, and the diocesan bishop -- all in a period of three days! Hilary became known as a gentle pastor, a hymnist, and so brilliant a theologian, particularly against the Arian heresy, that he was tagged as the "Athanasius of the West".
The following, from his treatise On the Trinity, sounds as if it could have been written by any seeker of the Truth in our own time: "When I began to search for the meaning of life, I was at first attracted by the pursuit of wealth and leisure. As most people discover there is little satisfaction in such things, and a life oriented to the gratification of greed or killing time is unworthy of our humanity. We have been given life in order to achieve something worthwhile, to make good use of our talents, for life itself points us to eternity. How otherwise could one regard as a gift from God this life which is painful, fraught with anxiety, and which starts in infancy with a blank mind and ends in the rambling conversations of the old? It is my belief that human beings, prompted by our very nature, have always sought to raise our sights through the teaching and practice of the virtues such as patience, chastity, and forgiveness, in the conviction that a good life is secured only through good deeds and good thoughts. Could the immortal God have given us life with no other horizon but death? Could the Giver of good inspire us with a sense of life only to have it overshadowed by the fear of death? Thus I sought to know the God and Father who has given us this great gift of life, to whom I felt I owed my existence, in whose service was honor, and on whom my hopes were fixed...[M]y soul had discovered a hope bigger than I had ever imagined possible...by means of my faith I was called to a new birth..." 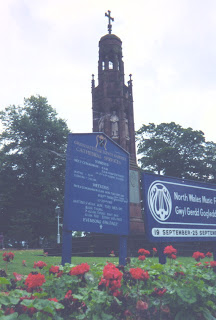 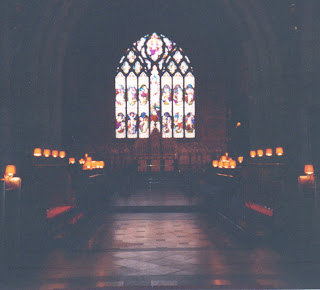 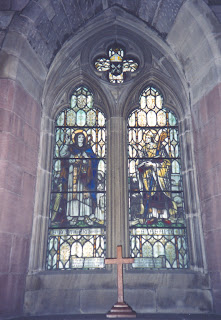 One of our stops on a pilgrimage to North Wales in 1993 was St. Asaph's Cathedral, seat of the Archbishop of Wales, Alwyn Jones, who gave a wonderful talk and celebrated Eucharist for us. For me it had the definite sense of being one of those "thin places", where the earthly and heavenly come into close conjunction. The picture above is the Cathedral's window of St. Kentigern and St. Asaph. I wasn't familiar with the name Kentigern; in fact, I think I learned about him over lunch, after our tour of the Cathedral, at Kentigern Arms (pictured below). The tour guides had chosen the restaurant here ahead of time, but when our band or thirty or so pilgrims arrived, it seemed as though the small staff became quite overwhelmed with the crowd. The rather long wait for food (we were there for 2 hours!) was amply rewarded by the staff's warmth and the quality of the beef marinated in ale, and chips.
Kentigern has an interesting history, though there are many gaps. His mother, Thenaw, was the daughter of a Brythonic king, Lleuddun, who ruled in a region of what is now Scotland. According to a British Library manuscript, Thenaw became pregnant after being seduced by Owain mab Urien. Her furious father had her thrown from the heights of Traprain Law; but, surviving, she was then abandoned in a coracle, drifting across the River Forth to Culross, where Kentigern was born. He was eventually placed in a monastic school and was raised by St. Serf who ministered to the Picts in that area. Serf gave Kentigern his popular pet-name: Mungo = "darling" or "dear one", a name which stuck as an alternate for Kentigern. Having been educated to believe in the God of Truth, Kentigern, at the age of twenty-five, felt compelled to bring that message as a missionary to Britons who were living in Strathclyde, the site of modern Glasgow. St. Ninian had previously introduced Christianity to the region, and his followers welcomed Kentigern and procured his consecration by an Irish bishop. Kentigern built a church in the area where the present medieval cathedral now stands. For some thirteen years, he laboured in the district, living austerely, and inspiring others by his holy example and preaching the Truth which he lived.
A strong anti-Christian movement in Strathclyde compelled Kentigern to flee to Wales, via Cumbria, staying for a time with St. David at his monastery in South Wales, and afterwards moving on to Gwynedd in the north, where he founded a church at Llanelwy, site of the current St. Asaph's Cathedral. Eventually, when the new King of Strathclyde, Riderch Hael, invited Kentigern to return, Kentigern appointed Asaph as bishop of Llanelwy in his place. Kentigern continued evangelizing, and the large community which grew up around him became known as Clas-gu = "the dear family". Another great missionary, St. Columba, is said to have visited Kentigern. The two saints embraced, held long conversations, and exchanged their pastoral staves. In old age, Kentigern/Mungo became so feeble that his chin had to be set in place with a bandage. His biographer, Jocelyn of Furness, says: "Blessed Kentigern began to realize from his frequent falls and increasing frailty that the end of the earthly tent...was near at hand." He died in 603 and is buried at St. Mungo's Cathedral, Glasgow. 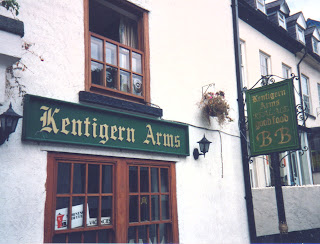 George Fox was the eldest of four children of a weaver, Christopher Fox and his wife, Mary, from rural England. Fox was apprenticed to a cobbler, but living in a time of great social upheaval and war, he rebelled against current religious and political consensus by proposing an unusual and uncompromising approach to Christian faith.He abandoned his trade, left his family, and began touring Britain as a dissenting preacher, for which he was often persecuted by those who disapproved of his beliefs. "The Inner Light of the Living Christ" became his watchword, and he preached that Truth could be found only through the Inner Voice speaking directly to each soul. In the mid-1650's he formed a society called The Friends of Truth or Friends, as a protest against the authoritarianism of the Presbyterian system. The group got the name Quakers from the fact that in welcoming God into the soul, often while in a state of trance, members would often experience noticeable bodily movement, termed quaking by Gervase Bennet in 1650. Though often used by others as an epithet, Fox's group adopted Quakers as a name for themselves.

Fox married Margaret Fell, a leading Friend and widow of one of his wealthier supporters. His ministry expanded and took him on missionary journeys around England, in North America, and in the West Indies. Periodically Fox was jailed for trying to preach his message in places where he was not welcome. He spent the final decade of his life working in London to organize the expanding Quaker movement. Though many were unreceptive to his message, others such as William Penn and Oliver Cromwell respected Fox. His journal, first published in 1694 after his death, is known even among non-Quakers for its vivid account of his personal journey.
Reading a journal entry of George Fox's written in 1661, one is struck by the relevance to our times of his conviction of God's Truth and his commitment to peace: "Our principle is, and our practices have always been, to seek peace and ensue it, and to follow after righteousness and the knowledge of God, seeking the good and welfare, and doing that which tends to the peace of all. We know that wars and fightings proceed from the lusts of men, out of which lusts the Lord hath redeemed us, and so out of the occasion of war. The occasion of which war, and war itself (wherein envious men, who are lovers of themselves more than lovers of God, lust, kill, and desire to have men's lives and estates) ariseth from the lust. All bloody principles and practices, we, as to our own particulars, do utterly deny, with all outward wars and strife and fightings with outward weapons, for any end or under any pretence whatsoever. And this is our testimony to the whole world..."
George Fox's burial marker at Bunhill Fields burial ground, London
Posted by Harry Allagree at 12:19 PM