First, I want to point out that tomorrow, the feast of the Confession of St. Peter, and continuing through next Monday, January 25, the feast of the Conversion of St. Paul, the Church celebrates a Week of Prayer for Unity and Interreligious Dialogue. Though originally designed and commonly understood to pray for Christian unity, in more recent years it has widened in scope to include interfaith involvement.
This ecumenical week began in the little New York community of Peekskill, specifically on a remote hillside 5 miles away, called Graymoor, home to a small Episcopal religious community of friars and sisters, who were quite controversial and unpopular in the Episcopal Church. At a time when religious community members were often suspected as “advance agents” for a Roman Catholic takeover of the Protestant Episcopal Church, the Graymoor Franciscans, “eccentrics”, as they were called, did very little to allay such suspicions.


Fr. Paul Wattson and Mother Lurana White, co-founders of the Graymoor Franciscan Friars and Sisters of the Atonement, quite openly advocated for a reunion of Anglicans with Rome and recognition of the papacy. Most Protestants and even some Catholics were astounded by the idea. Because of their committed stance, the Graymoors were under enormous pressure from church leaders and editors to abandon their efforts. Fr. Paul was shunned in most Episcopal pulpits, and Mother Lurana had to literally send her sisters out begging just to keep the Society of the Atonement alive.


Nevertheless, Fr. Paul and Mother Lurana pursued their perceived God-given mission: to seek a coming together of divided Christian churches. The idea of a period of prayer for Christian unity came up in a conversation between Fr. Wattson and an Anglican clergyman in England, The Rev. Spencer Jones. In the autumn of 1907, Fr. Jones suggested an annual day of prayer for Christian unity. Fr. Wattson concurred, but simultaneously conceived the idea of a Church Unity Week or “Octave”, to be observed for eight days between January 18 and 25, the dates of the two feasts mentioned earlier. The first attempt at the observance, held in the small, gloomy Graymoor chapel in 1908, met with lukewarm response, at best.


Fr. Paul and Mother Lurana, because of their pro-Roman leanings, finally asked to be admitted into the Roman Catholic Church, and in October, 1909, Pius X received the whole Society of the Atonement as a body. Eventually, the Octave became very popular, but almost exclusively in the Roman Catholic Church. Other Christian bodies held observances of their own, more compatible with their theology and spirituality.


A number of historical movements towards Christian unity, from the 18th century on, preceded the Graymoors’ efforts. In the 19th century, the desire for Christians to pray together was occasioned by the divisions which weakened the power of Christian witness. In 1846 the Evangelical Alliance was established in London and developed both international and inter-church connections. The Association for the Promotion of the Unity of Christians was founded in 1857 with Anglican, Roman Catholic and Orthodox participation. The Popes had consistently urged Roman Catholics to pray for Christian unity, but only from the particular stance of return to the Roman Catholic fold. The Lambeth Conferences, particularly in 1878, during this period also promoted prayer for Christian unity. In 1913 the Faith and Order Commission of the Protestant Episcopal Church issued a number of publications for Christian unity, and the preparatory Conference on Faith and Order at Geneva in 1920 appealed for a special week of prayer for Christian unity. Faith and Order continued to issue "Suggestions for an Octave of Prayer for Christian Unity" until 1941 when it changed the dates for its week to that of the January Octave. In this way, Christians, who for reasons of conscience, could not join with others in prayer services could still share in united prayer at a specific time.
In 1935 Abbé Paul Couturier, a French priest, addressed this problem by promoting prayer for Christian unity on the inclusive basis that "our Lord would grant to his Church on earth that peace and unity which were in his mind and purpose, when, on the eve of His Passion, He prayed that all might be one." A huge ecumenical step was taken in 1964 with the issuing of the Decree on Ecumenism of Vatican Council II. The Decree was clear for Roman Catholics: "In certain special circumstances, such as in prayer services for unity and during ecumenical gatherings, it is allowable, indeed desirable, that Catholics should join in prayer with their separated brethren.”
Today the Week of Prayer for Christian Unity and Interreligious Dialogue belongs to all people of faith who wish, as Jesus did, "that all may be one". The formation of official ecumenical dialogues among Christians and between non-Christian bodies reinforces the value of such a yearly observance. 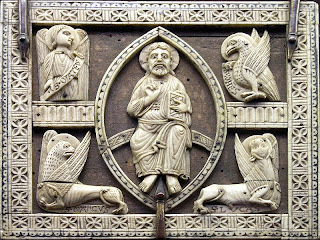 Now, how is the Week of Prayer for Christian Unity connected with the Scriptures for this 2nd Sunday after the Epiphany? The Gospel’s main message is that Jesus, in his Person, in the first sign of his public ministry, reveals to us God’s Presence. We live in a world of signs and of sign-making. Our signs attempt to communicate, to convey, a message. They’re attempts to be there, to be present, to another person(s). St. John today describes Jesus dealing with people in the way that we know best: by signs, by words.


This particular Gospel chapter [John 2:1-11] is part of a section (extending from Chapter 1:19 through Chapter 12) which scholars refer to as the Book of Signs. These chapters show Jesus using signs, miracles, if you will; and words. particularly the discourses explaining the signs, in his public ministry to re + veal = lit., to pull back the veil, to uncover: to communicate and convey to his hearers that what they see in his person is the very Presence of God.


The story of the wedding at Cana, a unique story and one found only in John’s Gospel, is familiar, though all the dynamics aren’t so clear. John says that Mary was there at the celebration and that Jesus and the disciples had also been invited. Some suggest that the wine supply, which, according to Jewish custom, depended somewhat on gifts of wine from the guests, ran short perhaps because Jesus and his disciples, poor itinerants that they were, didn’t bring enough. At any rate, Mary makes Jesus aware that the newly-weds are facing an embarrassing situation: “They have no wine.” Jesus replies: “Woman, what has this concern of yours to do with me? My hour has not yet come.”


I suspect I know what some of you’re thinking upon reading that -- something like: “Why is Jesus acting like such a jerk towards his mother with this snarky reply?” The fact is: he’s not! Quite the contrary. Jesus addresses Mary as “Woman”, both here and at the Crucifixion, with a polite word of greatest respect. There’s no hint of rebuke of rejection. What Jesus’ comment implies is a denial of a role, not of a person. He insists that human kinship, of whatever kind, can’t affect the pattern of his ministry. He has his Father’s work to do, according to the Father's timing, and in order to do that he places himself beyond natural family ties and relationships, as he later indicates is part of being a disciple.


But Mary, like any good Jewish mother, persists! As evident from other places in the Gospels, persistence always seems to result in Jesus acting. Mary’s persistence becomes the occasion for Jesus’ first sign, the initiation of his ministry. Mary simply says: “Do whatever he tells you.” Such willingness to rely on Jesus’ sovereignty prepares the way for a miracle, a new beginning.


The imagery of a wedding feast hearkens back to the messianic days in the Hebrew Scriptures. As water is replaced with choice wine, so are the old customs replaced with Jesus’ new teaching. The steward’s response: “You have kept the good wine until now” surely hints at and proclaims the hope given by the Presence of the Messiah, the Holy One of God.


Note, too, that there were six stone water jars, each holding 15-25 gallons! By my count, that’s about 90-150 gallons of choice wine. Amos, Hosea, Jeremiah and the other prophets had spoken of an abundance of wine as a sign, a prefiguring, for the joy which would characterize the final days when God’s Holy One finally came. What joy there must have been at this feast!


When you put all the symbolism in this Gospel together, and we’ve only scratched the surface here, this first sign of Jesus clearly communicates and conveys that he is God’s Holy One, the One who embodies God’s very Presence, the Revelation of divine glory: again, a sign of the last times, when the Messiah would make the Lord’s glory visible in all the earth. As John’s Gospel unfolds, along with the other three Gospel accounts, we’re given a picture of Jesus, a Man whose words and actions embody love, healing, wisdom, compassion, service, prayerfulness. And it is this Man who is also God’s Son who calls each of us to embody those same characteristics in our relationships with each other and with others.


In the first reading [Isaiah 62:1-5] Isaiah compels us not to “keep silent”, “not [to] rest” in our ministry as the Church. Our “builder” has married us, Isaiah proclaims. As the bridegroom rejoices in his bride, “so shall your God rejoice over you”. Paul, in the Epistle [1 Corinthians 12:1-11], also confirms that you and I as signs of that same Presence are to use our Spirit-given gifts to build up the “common good”. To do this is to proclaim that “Jesus is Lord.” And this ministry of ours as the Church, in Christ, extends to all our ecumenical and interfaith relationships, among many others.


We’re all aware of the horrific earthquake tragedy this week in Haiti. This gives even more poignancy and urgency to what the Scriptures say to you and me. As the Church we need to be in solidarity, present, even as Christ, God’s Holy One, is, to our Haitian sisters and brothers, in whatever way we can: by donations to their cause (e.g., Episcopal Relief & Development), by support of their relatives in this country, by relief efforts, etc., but certainly and primarily by earnest and continual prayer.


A dear deceased Trappist monk friend of mine, Fr. Brendan Hanratty, once sent me this quote: “The schisms, persecutions, and polemics of our yesterdays [today] begin to assume a certain unreality...As the Christian world once split on the dipthong, so have Christians killed each other for a definition. That they should quarrel and divide within the great area of mystery created by the Incarnation, which they share and live by, becomes increasingly unacceptable. The most elementary lesson of a faith held in common is to love, and so to understand one another...”