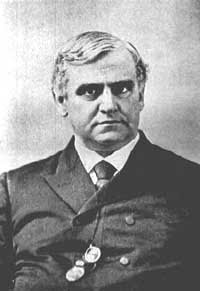 Phillips Brooks was born in Boston, MA in 1835. Through his father, William Gray Brooks, he was descended from the Rev. John Cotton; through his mother, Mary Ann Phillips, a very devout woman, he was a great-grandson of Samuel Phillips, Jr., the founder of Phillips Academy, Andover, Massachusetts. He and three of his six brothers -- Frederic, Arthur and John Cotton -- were ordained in the Episcopal Church.

Brooks attended the Boston Latin School and graduated from Harvard University in 1855 at the age of 20. After a brief period as a teacher at his alma mater, Boston Latin, he began his studies to become an Episcopal priest at Virginia Theological Seminary, Alexandria, VA, in 1856 .
He graduated from Virginia Theological Seminary in 1859, and was ordained deacon by Bishop William Meade of Virginia, and assigned as rector of the Church of the Advent, Philadelphia. In 1860 he was ordained priest, and two years later, in 1862, became rector of the Church of the Holy Trinity, Philadelphia. He remained here for seven years, gaining an increasing name as a preacher and patriot. He was a man of great physical bearing, standing six feet four inches tall.
During the American Civil War he upheld the cause of the North and opposed slavery. In 1869 he became rector of Trinity Church, Boston, where his memorial statue can be seen on the left exterior of the church.
"[My only ambition]", Brooks once wrote "is to be a parish priest and, though not much of one, would as a college president be still less". His sermons, for which he was so famous, reflect his sincere interest in the sacramental elements of the faith. Under his inspiration architect, H. H. Richardson, muralist John La Farge, and stained glass artists, William Morris and Edward Burne Jones, created an architectural masterpiece in Trinity Church, Boston. Among the notable features was the first free-standing liturgical altar in the United States within an overall chancel design which attracted attention even in British architectural magazines for its being influenced by the Liturgical Movement. Behind the free-standing altar there was an another revival from the early church chancel: a great synthranon for priests, i.e., a continuous bank of connected clergy seats running all around the apse. Because Massachusetts had two bishops at that time, the bishops' chairs were placed inside the altar rail to either side of the holy table. There were no choir stalls to distract from the central altar, which was hardly recognized as an altar in a period when most altars were placed in front of elaborate carved screens. Also, until 1888, there was no pulpit. Brooks preferred to use a modest lectern near the rector's stall on the south side of the chancel. An eagle lectern stood on a balustraded ambo in the center at the chancel steps.
Such was the magnificence of Trinity Church that in his chapter on Phillips Brooks' chancel in Ralph Adams Cram: An Architect's Four Quests, Douglass Shand-Tucci calls it "an American Hagia Sophia", a reflection of Brooks' architectural and liturgical tastes. His feelings on these matters are disclosed in his travel writings, where in Germany, for instance, he referred to "thrilling music" and "thrilling incense" with respect to a liturgy he attended there in the Roman Catholic cathedral. Holy Week in Rome also greatly moved him, especially the Papal high Mass on Easter. Although he despaired of Anglo-Catholic ritualism, he championed many aspects of the Liturgical Movement, including congregational singing at the liturgy. At the Eucharist Brooks would preach, not from the pulpit, but from the chancel steps, and, although he liked to preach in a black academic gown, he never failed to appear in a commodious surplice and stole when he officiating at the Office or the Eucharist.

In 1877 the building of Trinity was completed, but since they could not then afford them, the Venetian mosaics which Brooks and Richardson wanted were not possible. Once the magnificent new altar and sanctuary, designed by Maginnis and Walsh, became a reality in 1938, then Trinity's chancel reflected that aspect of Brooks' dreams for Trinity, what he called "America's glory forever". Here Phillips Brooks preached Sunday after Sunday to great congregations, until he became a bishop.
For many years he was an overseer and preacher at Harvard University, but in 1881 he declined an invitation to be the sole preacher at the university, as well as professor of Christian ethics. In 1886 Brooks also declined election as assistant bishop of Pennsylvania. On April 30, 1891 he was elected the sixth Bishop of Massachusetts, and was consecrated on October 14 at Trinity Church.
Phillips Brooks died, unmarried, in 1893, only 15 months after becoming Bishop. His death marked a major event in Boston's history. One observer reported: "They buried him like a king. Harvard students carried his body on their shoulders. All barriers of denomination were down. Roman Catholics and Unitarians felt that a great man had fallen in Israel."
There are volumes of his excellent sermons still available today, but simply reading them, one misses the most important element: the warmth and strength of the one who composed and delivered them. In the words of David Veal [Saints Galore], Phillips Brooks "had a real gift for warming the hearts and stimulating the minds of his listeners. James Bryce wrote, 'There was no sign of art about his preaching, no touch of self-consciousness. He spoke to his audience as a man might speak to his friend...' He preached sound Christian doctrine to listeners who ostensibly had no interest in such -- and he got by with it! Although he was theologically quite orthodox and conservative, he came to be considered a "liberal" leader in his day simply because of his concern and interest in the social and intellectual issues of the times."
Posted by Harry Allagree at 10:25 AM