Light Out of Darkness 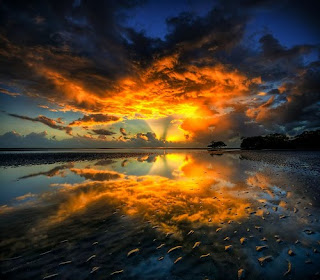 (Photo by Christolakis, Nudgee Beach)
My friend, Fr. Leo Joseph, OSF, teasingly asked me this morning if I was tracking the Magi as they journeyed to Bethlehem. I told him "Yeah, if only they can get through the security checkpoint"!
In these few days before the great feast of the Epiphany or the Shining Out, the Manifestation of the Messiah, the daily Office provides the second reading from the Letter to the Ephesians which I think of as the "ecclesiological" epistle. In recommending how we can live out being the "ekklesia", the "ones called out" or the "assembly", the Church, the unknown author of Ephesians writes:
"...Be imitators of God, as beloved children, and live in love, as Christ loved us and gave himself up for us, a fragrant offering and sacrifice to God."
Think about that for moment.
You and I aren't called to "be" God, a fantasy of the nth degree, though we often seem to try to give it our best shot! We're called to "imitate" God, to ape God, to act as if we were Godself. And to do this not in any sense of controlling, but of loving others, "as Christ loved...and gave himself up..." Can you imagine yourself as loving anyone as Jesus loved, realizing what the implications are in giving oneself up as he did? Yet that's exactly what the writer is saying: "Act as if...live your life in relation to others as if..." And how, exactly, does the writer suggest that we fill that tall order?
"But fornication and impurity of any kind, or greed, must not even be mentioned among you, as is proper among saints. Entirely out of place is obscene, silly, and vulgar talk; but instead, let there be thanksgiving. Be sure of this, that no fornicator or impure person, or one who is greedy (that is, an idolater), has any inheritance in the kingdom of Christ and of God. Let no one deceive you with empty words...Therefore do not be associated with them."
Fornication; impurity of any kind; greed, obscene, silly and vulgar talk: this is just a sampling of actions which, far from imitating God or sharing love, constitute the greatest sin. "Greatest" sin because, in the writer's term, it is idolatry, a setting up of a false, loveless god to imitate, and by implication, a false Jesus to imitate. This kind of god has no regard for giving self up for anyone, but only for putting "Me" first, using whatever and whomever in order to satisfy one's own selfishness and neediness. Such a god is one of no-being, a god of darkness, one whose devotees stumble around in the darkness of their meaningless lives of emptiness and isolation.
The writer of Ephesians utilizes the contrast between darkness and light which figures so prominently throughout the Christmas, post-Christmas, and Epiphany liturgies:
"For once you were darkness, but now in the Lord you are light. Live as children of light -- for the fruit of the light is found in all that is good and right and true. Try to find out what is pleasing to the Lord. Take no part in the unfruitful works of darkness, but instead expose them. For it is shameful even to mention what such people do secretly; but everything exposed by the light becomes visible, for everything that becomes visible is light. Therefore it says,
‘Sleeper, awake!
Rise from the dead,
and Christ will shine on you.’"
If you really want to imitate God and Christ, he intimates, live in the light, in honesty, in truth, in reality. It's not easy; it takes effort: "Try to find out what is pleasing to the Lord..." The guiding principle for such living is to categorically refuse to take part in or to be part of the darkness: shadiness, evasiveness, manipulation, lying with no regard for any consequences, deliberately setting one's heart in blindness against truth. Secrecy is often the tip-off, when we intentionally choose to keep the lid on some or all of our actions, lest others find out; denial, even in the face of evidence to the contrary; ignoring what is real and factual. Spiritual darkness abhors light; only the light of the Risen Christ, by whom "Death has been swallowed up...", can bring us spiritually to a full, standup position of awakeness to the realities around us.
The writer's concluding advice is simple, one might almost be tempted to say, "simplistic", by human standards:
"Be careful then how you live, not as unwise people but as wise, making the most of the time...do not be foolish, but understand what the will of the Lord is...be filled with the Spirit, as you sing psalms and hymns and spiritual songs among yourselves, singing and making melody to the Lord in your hearts, giving thanks...for everything..." The fool refuses to come out of the darkness, continues to live the Big Lie. The one who would live in the light humbly devotes herself/himself to wisdom, truth, reality, the giving of self, love: knowing that all of those are simply other names for Godself.
Posted by Harry Allagree at 1:07 PM