Beholding By Faith, Strengthened To Bear Our Cross, Changed Into His Likeness

Today begins the time between Epiphany and Lent in the liturgical year. This Sunday’s Collect suggests a pretty clear agenda for accepting and living out the invitation which the Church will hold out to us on Ash Wednesday: “I invite you...to the observance of a holy Lent, by self-examination and repentance; by prayer, fasting, and self denial; and by reading and meditating on God’s holy Word…” What the Collect calls us to is: 1) to behold by faith the light of Jesus‘ countenance; 2) to be strengthened to bear our cross; and 3) to be changed into his likeness.

All the readings reinforce this call. In Exodus (24:12-18), as God bade Moses, so God invites us: “Come up to me on the mountain, and wait there…” Both the Epistle (2 Peter 1:16-21) and Gospel (Matthew 17:1-9) recount how God, before the passion, revealed God’s only-begotten Son’s glory upon the mountain: by proclaiming, “This is my Son, my Beloved, with whom I am well pleased…” The writer of 2 Peter expands on this by recommending: “You will do well to be attentive to this as to a lamp shining in a dark place, until the day dawns and the morning star rises in your hearts…” Matthew, in turn, adds one simple admonition: “...listen to him!”

In the first verse of the Gospel, Matthew writes: “Six days after Peter said that Jesus was the Christ, the Son of the living God,”, thus acknowledging in faith that in the Person of Jesus God’s reign has begun among us, “Jesus took with him Peter and James and his brother John and led them up a high mountain… And he was transfigured before them…”

We could find no better source for envisioning the implications of today’s Gospel than the magnificent painting called The Transfiguration, by Raffaello Sanzio da Urbino, known to us simply as Raphael (1483-1520). Raphael was commissioned for this painting in late 1516 or early 1517, by Cardinal Giulio de’ Medici. Though it was meant to go to the Cathedral of Narbonne, France, along with another painting. it never left Rome. By the time Raphael died in 1520 at the age of 37, it was all but completed, except for the bottom right-hand area, which was finished by others later.

Raphael’s painting has two main sections which visually summarize today’s whole Gospel story. In the topmost section a resplendent Christ, clothed in snow-white raiment, seems to float, as if suspended before the painting itself, hands raised in an almost ecstatic gesture toward the unseen divinity of the Father and the Holy Spirit, united and concentrated in himself. Jesus is flanked on either side by Moses and Elijah. Spectacular light effects blind the trio of Peter, James and John, contrasting with the darkness of the lower scene. 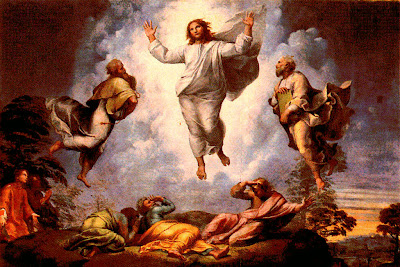 The bottom half of the painting, the second main section, has three distinct parts, one on the left, depicting the nine other Apostles; another on the right, showing the demon-possessed boy and others surrounding them, from the story in Luke 9; and finally in the center, the figure of a kneeling woman, separating the two groups. Next to the boy, holding him, is presumably his father, with a furrowed brow and wide open eyes looking directly to the Apostles, looking for their help with alternating hopefulness and fear.

The viewer’s eye is drawn to a blonde-haired woman, kneeling in the middle. Giorgio Vasari, a 16th century commentator on paintings, refers to her as “...the principal figure in that panel who, having knelt down before the Apostles, and turning her head towards them, stretches her arms in the direction of the maniac and points out his misery...” The figure serves the same purpose as someone addressing the group. The gesture of her gaze and pointed arm and finger “speaks”, as it were, directly to the Apostles, appealing to them to look at the demoniac boy. But, despite her striking presence, the Apostles look past her, unresponsive to the boy’s obvious need. Their inability to “see” the sick boy as a test of their faith, in effect, prevents them from being able to heal him: as the boy’s father tells Jesus later in Luke’s Gospel story, “I begged your disciples to cast [the demon] out, but they could not.” The beauty and white-shining skin of the woman suggests that she represents here on earth the divine manifestation of the compassionate, radiant, Christ; she’s a bridge figure between the Apostles and the group surrounding the boy who needs to be released from the demon. 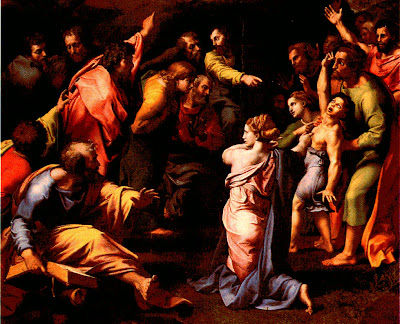 In Matthew’s version of the demoniac boy, the Apostles privately ask Jesus why they couldn’t heal the boy. Jesus spells it out plainly: “Because of your little faith.” St. Augustine, commenting on this story, sees it as a parable for the need to exercise faith in the resplendant Christ in order to address both our own needs and those of others. This female figure, ignored by the Apostles, highlights the failure of faith to see, to understand, and to address the true challenge posed to them by people like the possessed boy.

So the Collect invites us, first of all, to behold, to see, to contemplate with the eyes of faith the radiant reality of Jesus, revealed and transfigured before us. But following Raphael’s depiction, the next step is also to behold, see, and contemplate the reality of our individual life’s suffering and pain, as well as the pain of the world, the challenge of which faces us on nearly every page of the morning paper and on every nightly newscast. The only One who can prepare us and strengthen us to bear our cross is the transfigured One, the only Person on whom we can set our hearts with utter confidence, which is really what faith means. It’s Jesus, God’s own Son, God’s Beloved, with whom God is “well pleased”, who makes this possible.

Finally, the Collect highlights our need to be changed, transformed into Christ’s likeness. It’s possible, though probably not Raphael’s intent, that the female figure in his painting could represent Wisdom = Sophia. Even in the Hebrew Scriptures, Wisdom reflects, in an earthly fashion, the fullness of God’s glory and splendor, expressed in God’s very Being as holiness, justice, mercy, love, and grace. She understands that each of us is called to be that for one another and for the creation around us, at the deepest places of each person’s need. We could picture Wisdom asking us: “To whom do you and I reach out, and how do we reach out?”: in hopefulness? in fear and anxiety? in desperation? In terms of our relationships with one another and with the whole of creation, could it be that Wisdom calls us to task for our inattentiveness, our ignorance, our insensitivity, our destructive actions and habits, and even our willful overlooking of one another’s cries for help? Perhaps she seeks to draw us into her vision, the glory and power of Godself, into genuine faith, to help us realize that we, transfigured in Christ, are “the beloved son, the beloved daughter, the chosen”, every one of us, responsible for each other.

The 40 days of Lent are given to you and me to ponder, to pray, to discern where the message of today’s liturgy might be leading us. In the Gospel Matthew notes that “a bright cloud overshadowed them”. There are only two times in Scripture when the Greek word for to cast a shade on, to envelop, is used: the first is at the Annunciation to Mary [“the power of the Most High will overshadow you”, and the second is in this Transfiguration story which is told by Matthew, Mark, and Luke. Artist Jan Richardson says that “Each tale reminds us that we cannot contain or confine God within man-made structures. When God shows up, God often appears in and through people...God makes architecture of our anatomy. God seeks to make of us a dwelling, a habitation for the holy.” After Mary is
“overshadowed”, she silently carries Jesus in her womb. After the Transfiguration, Luke says, “they kept silent…[over] the things they had seen”. And so, perhaps, might it be with us during Lent.

A great biblical scholar, Walter Brueggemann, has a prayer which could surely be addressed to the Jesus of Matthew’s Gospel and of Raphael’s Transfiguration:


You, majestic sovereign...move off the page!
Move off the page to the world,
move off the page to the trouble,
move out of your paged leisure to the turmoil of your creatures.
Move to the peace negotiations, and cancer diagnoses,
and burning churches, and lynched blacks, and abused children.
Listen to the groans and moans,
and see and hear and know and remember, and come down!
It’s only in and through you and me, “beholding by faith”, “strengthened to bear our cross”, and “changed into his likeness” that the transcendent Christ can come down in visible form for the benefit of each of us and of all creation!
Posted by Harry Allagree at 1:57 PM