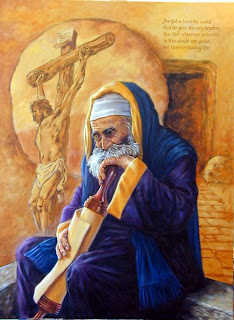 O God, whose glory it is always to have mercy:
Be gracious to all who have gone astray from
your ways, and bring them again with
penitent hearts and steadfast faith to embrace
and hold fast the unchangeable truth of your
Word, Jesus Christ your Son; who with you
and the Holy Spirit lives and reigns,one God,
for ever and ever. Amen.
The Gospel for Lent 2 (John 3:1-17) is a familiar one. It redefines the life of faith in Christ. It speaks of being born into a new life of the Spirit. Inasmuch as you and I are transformed, we're called to trust in God's promises.

James Adams' book, So You Think You're Not Religious?, written for modern skeptics, is a favorite of mine for the definition of faith which he suggests in it. Adams tells of an incident which he witnessed at Oxford University, where Robert Morgan was giving a series of lectures on Paul's Epistles. Morgan came to the text in Romans 10:9 where Paul says: "...if you confess with your lips that Jesus is Lord and believe in your heart that God raised him from the dead, you will be saved." "Then", Adams recounts, "he looked up and said, 'Believe in your heart. That is the only kind of believing that matters. As you probably know the Latin word 'credo', from which we get our word 'creed', is usually translated 'believe', but it means literally 'to set the heart'." Adams notes that this stunned him, for it suddenly solved for him how a skeptical person might, with integrity, pray the Nicene Creed. "'Credo'...'I believe in', really means 'I set my heart'. It does not mean 'I set my head'."

In John's Gospel passage Jesus and Nicodemus have an interesting conversation, "by night", John says. I think it helps to put that conversation into some perspective by reading the preceding three verses: "When he was in Jerusalem during the Passover festival, many believed in his name because they saw the signs that he was doing. But Jesus on his part would not entrust himself to them, because he knew all people and needed no one to testify about anyone; for he himself knew what was in everyone." John makes this observation in light of a challenge flung at Jesus by Jewish religious leaders in vv. 18-19, after he'd "cleared the deck" of moneychangers in the Temple just before that.

Nicodemus, a Pharisee, a Jewish leader, now approaches Jesus (note again, "by night"), opening with rather unctious words of praise about Jesus' skill as an authentic teacher, and alluding to the "these signs that you do" as evidence of that. Jesus who "himself knew what was in everyone", including this man, cuts right to the chase: "Very truly, I tell you, no one can see the reign of God without being born from above." That phrase, "the reign of God", by the way, appears only here and in v. 5 of John's Gospel. Jesus' statement whizzes right over Nicodemus' head as Nicodemus puzzles over the mechanics of how someone might be born again once the person has "grown old", as he himself presumably has. But Jesus is relentless, and says again, "You can't be part of God's reign without being born from above, that is, of water and Spirit." Water is a symbol with several meanings: a cleansing agent or a refreshing liquid. But also, in sufficient quantity, such as an ocean or the tsunami which devastated Japan last week, with rippling effects even here in our own state of California, it's a source of power, of undoing and destruction. Spirit is the principle of life. We might draw the implication that eternal life, which is the essence of being part of God's reign, is possible only through a rebirth, a transformation, a humbling, even an undoing or destruction, in a sense, of our human ways of knowing and understanding, and being given the gift of God's life-giving Spirit.

Jesus continues with a beautiful image of wind, breath, blowing where it chooses. Of course, the Hebrew word ruach and the Greek word pneuma = breath, spirit are both applied in Scripture to Holy Spirit also. As wind blows around us we can hear its sound, its voice, but we don't know where it comes from or where it goes. "So it is", says Jesus, "with everyone who is born of the Spirit." Well, poor old literal Nicodemus, "a teacher of Israel", as Jesus describes him, still doesn't "get it". Not so subtly, Jesus singles out the crux of the Nicodemus' problem: "We [the majestic "We" of the Trinity?? or "We" who've learned to set our hearts on God??] speak of what we know and testify to what we have seen; yet you [those who either haven't learned the necessity of setting their hearts on God, or those who've deliberately chosen to live in the darkness of blindness to what's right in front of them??] do not receive our testimony. If I have told you about earthly things and you do not believe, how can you believe if I tell you about heavenly things?"

Jesus then draws a parallel between Moses and "the Son of Man". There's a vertical ascent involved: "...just as Moses lifted up the serpent in the wilderness [cf. Numbers 21:4-9], so must the Son of Man be lifted up, that whoever believes in him may have eternal life. There's also a vertical descent: "...God so loved the world that he gave his only Son, so that everyone who believes in him may not perish but have eternal life." And this descent, the sending of the Son by the Father to humankind, was done so that all human beings themselves could ascend, be raised up, "that the world might be saved through him." In this passage, John, through Jesus, addresses you and me who are the Church. If Moses' action brought life to the Israelites, Jesus' actions, indeed everything which he did and said, brings eternal life to us. In the whole mystery of Jesus' crucifixion on the cross, his resurrection from the dead, and his being taken back into and glorified in the presence of the Trinity, you and I, through the power of the Holy Spirit, who sets our hearts on God, are ourselves raised to glory. "The reign of God" becomes our new way of existing. The only way this cannot happen is if I refuse the Holy Spirit ["blaspheme", according to Mark and Luke; "speak against", according to Matthew], if I choose to live in darkness and lack of understanding, thus withholding my heart from the very Spirit who is Love.

Hazel Jean Spire wrote the following in the January/February issue of alive now!:

"Florida. August.
I leave my husband to cast his line again. I point my new camera at the palm trees. Click. The wading birds. Click. The Miami skyline. Click. I shield my lens against an unusually bright glare from the ocean.
A fishing boat glides in to the wooden jetty. A young man steps out and calls my name. Who on earth knows me here?
'Yes?' I respond, feeling my toes sink into the wet sand while he makes a half hitch around a cleat.
'Did you think you could escape from me, Hazel?' The man is laughing now, and walking toward me.
I squint. 'Roger?'
'No, not your ex. Your first love. Remember the youth retreat, south coast of England?'
I want to hide. Instead I stammer, 'Oh, it's you.'
With a glance at Mark, who is reeling in a branch of seaweed fifty yards down the beach, I say, 'You know I've remarried.'
'Of course,' he says, and my old friend invites me to sit with him on the jetty. His hair and skin are a lot darker than in the mental picture I've been carrying.
'I'm sorry I cut off communication,' I tell him. 'No excuse really, though I did try to blame Roger.'
He smiles, but his eyes reveal the pain of rejection. 'I've missed you,' he says. 'You didn't reply to any of my messages.'
I shake my head in shame as well as disbelief that we're having this conversation. 'I was looking through some of your messages the other day. I've been through so much change lately, I was trying to find some words to help me. But they didn't make sense any more.'
He sighs. 'You used to be able to read my thoughts.'
Retrospect sweeps me back to those early steps away from my first love. All I can say is, 'I guess I wasn't ready to promise you anything at fifteen.'
'But you did accept my gift and that made you mine.' His look penetrates my soul.
'I still have plans for you.' His tone is gentle, persuasive, but I hestitate.
My husband wades to the top of his boots, casting again.
'What about Mark?'
'Oh, he's coming too, but I still want first place in your life.' My friend stands. 'It's not the first time I've been betrayed,' he says. 'I always knew you would choose your own way for a season. But I wouldn't force you to stay. I can only draw you back with my love.'
He reaches down and pulls me up with his strong brown arm. Now I notice the ugly scars. I remember what he did on a dark lonely hill outside Jerusalem. My guilty verdict is washed away by the tide of grace.
Posted by Harry Allagree at 12:03 PM