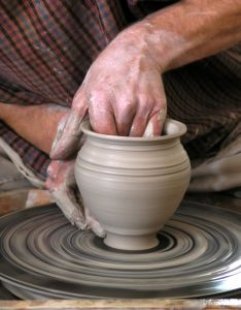 The passage from Jeremiah [18:11; 18-20] strikes a responsive note because it ends with a question which we’ve all undoubtedly asked: “Is evil a recompense for good?” [v.20] You and I might rephrase the question a little differently: “Why did God cause this tragedy, or whatever, to happen?”; “I don’t understand it: I pray and pray, and God never answers.” “There’s no justice in this world! The rich just get richer and the poor, poorer!”

It appears that Jeremiah was a sort of “visual learner”. God’s message told him to go to a potter’s studio: “...there I will let you hear my words.” Jeremiah watches intently as the potter works at his wheel, fashioning a clay vessel. But he goofs (the potter, that is). Perhaps he pressed too hard, used too much water on the clay, didn’t spin the wheel fast enough: whatever,...the pattern he’d set out to make was ruined.

The thing which Jeremiah noted was that the potter didn’t get upset and throw the piece of clay away. Patiently, “he reworked it into another vessel, as it seemed good to the potter to do…” It was then, after the potter handled the situation this way, that Jeremiah understood God’s message which he was to give to the people of Israel.

God compares Godself to a potter working with the clay, in this case, Israel/humanity. If the people are “bad” clay, i.e., they aren’t as clay should be, God is still able to fashion them into something useful, to accomplish the divine purpose, if the clay will respond to God’s expert touch. If, on the other hand, people who are “good” clay, i.e., capable of being fashioned into a vessel of God’s choosing, willfully allow themselves to be deficient clay, then even God won’t exercise his artistry. God won’t contradict the laws of nature which are the expression of the divine goodness and truth itself. The logical consequence and result, despite God’s creative hand, will be a misshapen, disfigured vessel. The potter’s creative purpose will have been purposely frustrated by the “clay”.

“Is evil a recompense for good?” therefore? Does God cause evil in our lives? or bad things to happen to good people? Certainly not! For God is like the potter, after all. Is Jeremiah’s message, in terms of the potter, meant to convey simply that the potter has dominion? that he calls the shots? that the clay isn’t important? that the potter exercises arbitrary control over the vessel’s existence, or that he can shape evil regardless of the quality of his clay?

Or does Jeremiah’s message, rather, have a different thrust: that a potter is one whose delight is in creating, in giving things the possibility to be; that potter is careful, precise, patient; that a potter puts something of her/himself into what is created; that a potter fashions objects which are useful, things which delight us with beauty, which benefit and serve others?

“Is evil a recompense for good?” No. But to say this doesn’t mean that it’s a complete answer, or that you and I understand or can ever fully grasp the mystery of evil in the world and in our own lives. It’s not a complete answer, but it’s a firm and sure answer, one based on the Word of God.

The reality of being human and limited and of being the inheritors of selfishness is that, sooner or later, we’ll each find ourselves as spoiled vessels in the Divine Potter’s hands. But faith tells us that God can and does rework us, if we allow it, into other, and more magnificent vessels, “as it [seems] good to the potter to do.” No one, I think, has expressed this more beautifully than St. Paul, writing to the Christians at Corinth: “But we have this treasure in earthen vessels, to show that the transcendent power belongs to God and not to us. We are afflicted in every way, but not crushed; perplexed, but not driven to despair; persecuted, but not forsaken; struck down, but not destroyed; always carrying in the body the death of Jesus, so that the life of Jesus may also be manifested in our bodies.” (2 Corinthians 4:7-10)
Posted by Harry Allagree at 11:20 AM