"The Winter Of Our Discontent..." 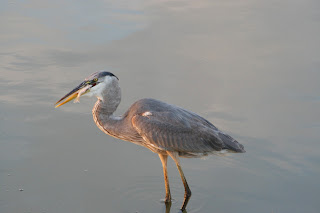 There’s an old Bengalese proverb which says: “The heron is a saint as long as there are no fish in sight.” How well that describes our human inclination to temptation! On this first Sunday of Lent the Scriptures raise questions about testing/temptation, and our response to it. What kept coming back to me as I thought about the proverb in regard to the human situation and to the Lenten season was the phrase from Act I of Shakespeare’s play, Richard III: “Now is the winter of our discontent…” What more easily frustrates and discontents you and me than our constant state of being tested, tempted, and even more, our willingness so often to give in?

The writer of Genesis (2:15-17; 3:1-7) reflects on this. His account, rather than being a chronicle of how evil began, is really a story about relationships: good relationships which go sour because of temptation and selfish choices. God carefully, caringly, creates man and woman, personally breathing into them God’s breath, God’s spirit, the fullness of life. What becomes possible, because of God’s initiative, is a relationship between the Creator and the creature.

God surrounds the man and woman with every created and uncreated good, symbolized by “the garden”, a sort of park -- the Hebrew calls it bliss = eden -- and God enjoins the humans to take care of it all and to keep it. God makes them aware of only one thing with which God will not, cannot, endow them: and that is God’s own divinity, God’s all-encompassing wisdom, symbolized by the tree of life, the tree of the knowledge of good and evil, which is off-limits. And that becomes the “fish in sight” which tantalizes the heron. A moral factor is thus introduced, for the humans are created beings, who live and labor as the Creator determines, not simply as they choose. To disobey God would be to violate the fundamental relationship boundary between being a creature and being the Creator.

But rather than really listening to God, the humans, aided and abetted by the doubt-creating serpent, are enticed to believe that they can improve on the Creator’s designs and actually cross over the boundary which God set up. Eve’s reply to the serpent’s question is a classic human instance of embellishing what God actually says. She says to the serpent: “We may eat of the fruit of the trees in the garden, but God said, ‘You shall not eat of the fruit of the tree that is in the middle of the garden, nor shall you touch it, or you shall die.’” But God was very direct: “Any tree in the garden? Eat away. But of the tree of the knowledge of good and evil, don’t eat -- or you’ll die.” No mention of “fruit”, or of a “middle” area, or of any command not to “touch” the tree. By embellishing and adding to what God actually says, the human falls into the constant temptation that we all do, of presuming to dictate to others what God “really” says or what God “really” means, thereby allowing ourselves to skirt around God’s actual will for us; or to absolve ourselves from the great effort and painful honesty that it takes to discern God’s will, ambiguous as that always seems to be.

Further, the woman and the man just can’t resist the allure of being “like God, knowing good and evil”, nor the insatiable thirst of knowing everything, nor the will to be independent and self-sufficient.
Having already been given everything by God which a human being would ever need to live fully, they still aspire to all that’s desirable and compelling to the human spirit, to all those impossible dreams held out by the lust of the flesh, the lust of the eyes, and the pride of life. “...She took of its fruit and ate, and...her husband who was with her...ate. Then the eyes of both were opened, and they knew they were naked…” Thus begins the “winter of our discontent” as human beings, through testing, temptation, and vulnerability.

The Evangelist Matthew (4:1-11) tells us another story of the experience of temptation. Here, too, the test is to refuse to let God be God, to dis-obey, literally, to “stop one’s ears”, as the Latin root of the word implies, and to act contrary to what we, in fact, are: creatures whose being comes totally undeserved from the loving Creator.

Matthew portrays Jesus as the trusting and faithful Beloved of the Father. As one who is fully a human being, Jesus, instead of trying to usurp God’s place, professes his absolute and unshakeable trust in God. Again there is a dialogue, a conversation, this time between the Adversary, Satan, and Jesus.

In quick succession the tempter poses three tests. He first dares Jesus to prove that he is God’s Son by miraculously turning stones into bread. Jesus, quoting Deuteronomy, counters that God provides his every need, just as God did for Moses and the Chosen People in the Exodus wilderness. “He humbled you by letting you hunger, then by feeding you...in order to make you understand that one does not live by bread alone, but by every word that comes from the mouth of the Lord…” (8:3)

The scene then shifts to Jerusalem, to the top of the Temple: the place of the Divine Presence. In a pious sham, the tempter quotes from Psalm 91, blasphemously suggesting that Jesus can prove how much he absolutely trusts God, as well as just how trustworthy God is, by simply throwing himself off the roof. “[God] will command his angels concerning you...On their hands they will bear you up…” Borrowing again from Deuteronomy (6:16), Jesus warns the tempter: “Do not put the Lord your God to the test.”

In the final temptation, Satan transports Jesus “to a very high mountain”. [Notice that Matthew has a propensity for mountaintop settings to proclaim important teachings!] Here the tempter offers a crass bribe of all the kingdoms of the world and their glory if only Jesus will abandon God and worship him. With a third and final quote from Deuteronomy (6:13) , Jesus repeats the definitive commandment: “Worship the Lord your God; serve God alone!”

The season of Lent and today’s Scriptures remind us that the disobedience of the humans in Genesis, thankfully, wasn’t the end of the story. “As by the one man’s disobedience,” Paul says to the Roman Christians (5:12-19), “the many were made sinners, so by the one man’s obedience the many will be made right with God.” Jesus, a human being like us, “tempted but without sin”, yet also a divine being, God’s beloved Son, makes it possible for us humans once again to recapture the original blessing, the deep reality of which we look forward to celebrating with all our hearts in Holy Week and Easter.

But it’s a hard-won reality. The “winter of our discontent” is a life-long warning of what cost the human race continues to pay for things to be set right again, of the cost which Jesus paid in giving his Blood, his human life, and of the cost which each of us must, in turn, pay as we struggle every day to be reborn from above.

Archaeologists tell us that the probable place where Jesus underwent his testing was near Jericho, the oldest town in the world, dating back more than 10,000 years: on a mountain named Jebel Quruntul, the “Mount of the Quarantine (= period of 40 Days)”, the “Mount of Temptation”. This harsh, bare mountain overlooks a winding road once used by Levitical priests. Jericho was and is a beautiful lush “paradise”, if you will, of food -- vegetables, dates, bananas, and citrus fruits -- and of water, from the Jordan River, four miles to the west, and from the underground tributaries. When Jesus wandered about during those 40 days atop Jebel Qurundul, he could see Jericho and all its wonders below. It would have taken him only minutes to go down and satisfy his hunger and quench his thirst. But his food, as he said, is “to do the will of the One who sent me.”

So here we are, at the beginning of another Lent, also being driven by the Spirit of truth, with Jesus, into the wilderness, the desert of Lenten discipline. The desert is the place of essentials, of the bottom-line. God bids us to withdraw to this place of spiritual inconvenience; in fact, God is wooing us to it. It’s the place of the unexpected. God doesn’t tip us off in advance as to what the desert of Lent has in store for us, and no two of us will encounter our desert in exactly the same way.

In her 1935 mystery novel, Gaudy Night, Dorothy L. Sayers captures what this all entails when one of her characters recalls “the ex tempore prayer of a well-meaning but incoherent curate, heard once and never forgotten, ‘Lord, teach us to take our hearts and look them in the face, however difficult it may be…’” The desert of Lent has its rigors. If you and I are really listening to the Spirit of truth, really obedient to the Spirit groaning within us, then we’ll face up to questions which need to be asked and answered:
- At this point in my life, what are my relationships like: with God? with others? with myself?
- What is it right now which particularly cries out and demands my spiritual attention and energy?
- How committed am I, really, to truth and honesty about who I am, humanly and spiritually?
- Where or from whom or what do I draw strength for coping with my day-to-day living?
- To what kind of ongoing conversion/transformation/redemption is God calling me at this time, especially in my relationships with others?

We enter Lent with the hope that, by God’s grace, we may each be able to pray the Easter Collect with full awareness of what it means when it says: “Grant us so to die daily to sin, that we may evermore live with him in the joy of his Resurrection.”
Posted by Harry Allagree at 8:22 AM