Paul Cuffee, born in 1757, was a Shinnecock Indian and an ordained Presbyterian minister and missionary, who, like his grandfather Peter John, preached among the Indian communities of Long Island. During his youth Cuffee had been an indentured servant to a Wading River farmer who became an enthusiastic convert in his early twenties. Cuffee ministered to Native American communities, including a small reservation called Poospatuck (present day Mastic Beach); Canoe Place Hampton Bays, and in the end, Montauk. Known as "Priest Paul", large crowds attended his services in order to hear his vigorous and eloquent preaching.

Because of Cuffee's efforts, a permanent presence of Native Americans was maintained in the area, resulting in the establishment of prayer meeting grounds in several locations. These became safe havens for diplomatic talks, and places where indigenous people could practice spiritually. Many of European descent joined in the effort of ensuring that Native Americans on Long Island could retain what little land they had left. Part of Cuffee's legacy, even today, is the ceremonial "June Meeting" for the Shinnecock tribe, which includes a Christian worship service. Paul Cuffee is mentioned in Harriet Beecher Stowe's famous anti-slavery novel, Uncle Tom's Cabin. 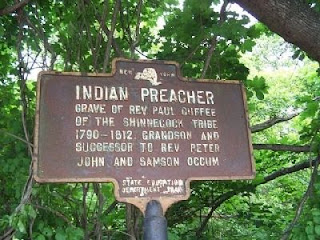 Priest Paul is buried on a tiny plot of land at Canoe Place in Hampton Bays. His grave sits all alone  between the Long Island Railroad tracks and Highway 27, the gravesite having been diminished by development on the Long Island Railroad. It has a stone marker which is weather-worn and broken in two. There is a small white fence around it, erected by his descendants on "Good Ground" which was once all Indian land. 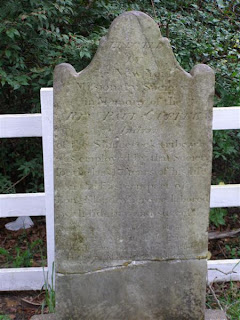 His gravestone, now difficult to read, says:
Erected by the New York Missionary Society,
in memory of the Rev. Paul Cuffee,
an Indian of the Shinnecock tribe,
who was employed by the Society for the last
thirteen years of his life, on the eastern part of Long Island,
where he labored with fidelity and success.
Humble, pious and indefatigable in testifying
the gospel of the grace of God,
he finished his course with joy on the 7th of March, 1812,
aged 55 years and 3 days.
Posted by Harry Allagree at 1:16 PM