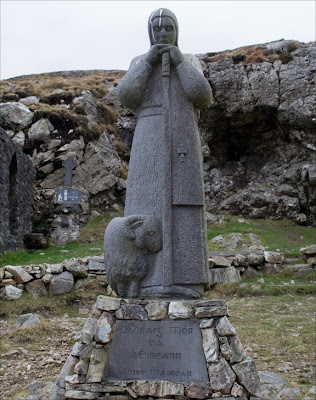 "I, Patrick, a sinner, a most simple countryman, the least of all the faithful and most contemptible to many, had for father the deacon Calpurnius, son of the late Potitus, a priest, of the settlement [vicus] of Bannavem Taburniae; he had a small villa nearby where I was taken captive. I was at that time about sixteen years of age. I did not, indeed, know the true God; and I was taken into captivity in Ireland with many thousands of people, according to our deserts, for quite drawn away from God, we did not keep his precepts, nor were we obedient to our priests who used to remind us of our salvation. And the Lord brought down on us the fury of his being and scattered us among many nations, even to the ends of the earth, where I, in my smallness, am now to be found among foreigners.

And there the Lord opened my mind to an awareness of my unbelief, in order that, even so late, I might remember my transgressions and turn with all my heart to the Lord my God, who had regard for my insignificance and pitied my youth and ignorance. And he watched over me before I knew him, and before I learned sense or even distinguished between good and evil, and he protected me, and consoled me as a father would his son.


Therefore, indeed, I cannot keep silent, nor would it be proper, so many favours and graces has the Lord deigned to bestow on me in the land of my captivity...

...And therefore for some time I have thought of writing, but I have hesitated until now, for truly, I feared to expose myself to the criticism of men, because I have not studied like others, who have assimilated both Law and the Holy Scriptures equally and have never changed their idiom since their infancy, but instead were always learning it increasingly, to perfection, while my idiom and language have been translated into a foreign tongue...

...But why make excuses close to the truth, especially when now I am presuming to try to grasp in my old age what I did not gain in my youth because my sins prevented me from making what I had read my own? But who will believe me, even though I should say it again? A young man, almost a beardless boy, I was taken captive before I knew what I should desire and what I should shun. So, consequently, today I feel ashamed and I am mightily afraid to expose my ignorance, because, [not] eloquent, with a small vocabulary, I am unable to explain as the spirit is eager to do and as the soul and the mind indicate...

...I am, then, first of all, countryfied, an exile, evidently unlearned, one who is not able to see into the future, but I know for certain, that before I was humbled I was like a stone lying in deep mire, and he that is mighty came and in his mercy raised me up and, indeed, lifted me high up and placed me on top of the wall. And from there I ought to shout out in gratitude to the Lord for his great favours in this world and for ever, that the mind of man cannot measure.

Therefore be amazed, you great and small who fear God, and you men of God, eloquent speakers, listen and contemplate. Who was it summoned me, a fool, from the midst of those who appear wise and learned in the law and powerful in rhetoric and in all things? Me, truly wretched in this world, he inspired before others that I could be—if I would—such a one who, with fear and reverence, and faithfully, without complaint, would come to the people to whom the love of Christ brought me and gave me in my lifetime, if I should be worthy, to serve them truly and with humility.

According, therefore, to the measure of one’s faith in the Trinity, one should proceed without holding back from danger to make known the gift of God and everlasting consolation, to spread God’s name everywhere with confidence and without fear, in order to leave behind, after my death, foundations for my brethren and sons whom I baptized in the Lord in so many thousands.

And I was not worthy, nor was I such that the Lord should grant his humble servant this, that after hardships and such great trials, after captivity, after many years, he should give me so much favour in these people, a thing which in the time of my youth I neither hoped for nor imagined.

But after I reached Ireland I used to pasture the flock each day and I used to pray many times a day. More and more did the love of God, and my fear of him and faith increase, and my spirit was moved so that in a day [I said] from one up to a hundred prayers, and in the night a like number; besides I used to stay out in the forests and on the mountain and I would wake up before daylight to pray in the snow, in icy coldness, in rain, and I used to feel neither ill nor any slothfulness, because, as I now see, the Spirit was burning in me at that time...

...And I know in part why I did not lead a perfect life like other believers, but I confess to my Lord and do not blush in his sight, because I am not lying; from the time when I came to know him in my youth, the love of God and fear of him increased in me, and right up until now, by God’s favor, I have kept the faith...

...Now I have put it frankly to my brethren and co-workers, who have believed me because of what I have foretold and still foretell to strengthen and reinforce your faith. I wish only that you, too, would make greater and better efforts. This will be my pride, for ‘a wise son makes a proud father’.

But I see that even here and now, I have been exalted beyond measure by the Lord, and I was not worthy that he should grant me this...But I fear nothing, because of the promises of Heaven; for I have cast myself into the hands of Almighty God, who reigns everywhere...


...Behold now I commend my soul to God who is most faithful and for whom I perform my mission in obscurity, but he is no respecter of persons and he chose me for this service that I might be one of the least of his ministers...


...Therefore may it never befall me to be separated by my God from his people whom he has won in this most remote land. I pray God that he gives me perseverance, and that he will deign that I should be a faithful witness for his sake right up to the time of my passing.

For the sun we see rises each day for us at [his] command, but it will never reign, neither will its splendour last...We, on the other hand, shall not die, who believe in and worship the true sun, Christ, who will never die, no more shall he die who has done Christ’s will, but will abide for ever just as Christ abides for ever, who reigns with God the Father Almighty and with the Holy Spirit before the beginning of time and now and for ever and ever. Amen.


Behold over and over again I would briefly set out the words of my confession. I testify in truthfulness and gladness of heart before God and his holy angels that I never had any reason, except the Gospel and his promises, ever to have returned to that nation from which I had previously escaped with difficulty.

But I entreat those who believe in and fear God, whoever deigns to examine or receive this document composed by the obviously unlearned sinner Patrick in Ireland, that nobody shall ever ascribe to my ignorance any trivial thing that I achieved or may have expounded that was pleasing to God, but accept and truly believe that it would have been the gift of God. And this is my confession before I die."


(From The Confession of St. Patrick)