"Do The Little Things In Life" 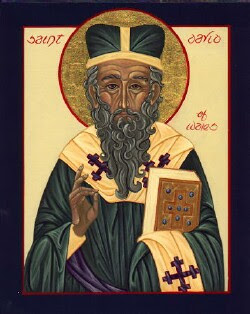 St. David of Wales (d. possibly as early as 544 and as late as 589), known in Welsh as Dewi Sant, was a bishop during the 6th century, and later regarded as a saint and the patron saint of Wales. We know that he was a Welshman, but relatively little factual information is known about his life.

David became a pupil of Saint Illtyd. According to Rhygyfarch, the late 11th century author of the saint's life story, David was the son of "sanctus rex ceredigionis", where "Sanctus" has been interpreted as the proper name of Sandde, King of Ceredigion. However, this Latin phrase can simply be read as "holy king of Ceredigion". The king of Ceredigion around the time of David's birth would have been Usai. Sandde was the brother of the latter, so probably only a king of part of Ceredigion. They were sons of King Ceredig, founder of Ceredigion. It's said that David was conceived through violence done to his poor mother, St. Non, daughter of Lord Cynyr of Caer Goch, and gave birth to him on top of a cliff during a violent storm. The site is marked by the Chapel of St. Non. David was educated at Carmarthen under Saint Paul of Wales, or "Old Paul", a disciple of St. Illtyd, and was baptised by St. Ailbe, Bishop of Emly.

David became renowned as a teacher and preacher, eventually founding some dozen monastic settlements and churches, including the great Glastonbury and his own Menevia. He was later elected bishop, and presided over two synods, at one of which he proved to be so eloquent and knowledgeable, that Archbishop Dubricius chose him as his own successor as Primate of Wales. David also made pilgrimages to Jerusalem. St David's Cathedral stands on the site of the monastery he founded in the Glyn Rhosyn valley, in Pembrokeshire.

The monastic rule, modeled on the lives of the Desert Fathers of Egypt, which David prescribed for his monks was quite severe. It included pulling the plough themselves, without draught animals; drinking only water, for which David earned the nickname "The Waterman"; eating only bread with salt and herbs; and spending the evenings in prayer, reading and writing. No personal possessions were permitted. It was a simple and ascetical life which he lived and which he taught his followers to live.

A symbol associated with St. David and the Welsh, but for somewhat unknown reasons, is the leek. The daffodil is also associated with the Welsh -- Taffy is a colloquialism for a Welshman -- and indirectly with David's name, since it is rendered dafydd [pronounced dah-fith].

It is claimed that David lived to a ripe old age, and he died somewhere around 589. The monastery is said to have been "filled with angels as Christ received his soul." His last words to his followers were, as recorded by Rhygyfarch:  "Be joyful, and keep your faith and your creed. Do the little things that you have seen me do and heard about. I will walk the path that our fathers have trod before us." "Gwnewch y pethau bychain mewn bywyd"= "Do the little things in life" is still a very well-known Welsh phrase.

David was buried at the Cathedral at St. David's, Pembrokeshire, where his shrine was a popular place of pilgrimage throughout the Middle Ages. During the 10th and 11th centuries the Cathedral was regularly raided by Vikings. In 1275 a new shrine was constructed, the ruined base of which remains today. The relics of St. David and St. Justinian were kept in a portable casket on the stone base of the shrine, but these were lost during the 16th century Reformation. Pilgrims to St. David's shrine include William the Conqueror and King Henry II. St. David was officially recognized by Pope Callixtus II in 1120.
Posted by Harry Allagree at 10:43 PM