"The Best Of All Is God Is With Us" 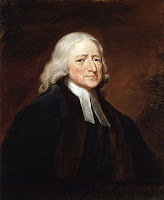 John Wesley (1703-1791) [photo on the left]
John Wesley was born in 1703, in Epworth rectory, England, the fifteenth of nineteen children of Samuel and Susanna Wesley. Wesley's father was a preacher, and his mother, a remarkably wise and intelligent woman. Her deep piety brought her children, from their nursery days on, into a familiarity with Bible stories.

John Wesley was a happy, normal young man, fond of games and especially of dancing. At Oxford he was a natural leader, and during the latter part of his stay there, was one of the founders of the "Holy Club," an organization of serious-minded students. His religious nature deepened through study and experience, but it was only some years after leaving the university and becoming familiar with Martin Luther's writings that he acquired a deep love and appreciation for the full riches of the Gospel.

John and his brother, Charles, whose lives and careers were intimately intertwined, were sent by the Society for the Propagation of the Gospel in 1735 to Georgia in the U.S., John as a missionary and Charles as secretary to Governor James Oglethorpe. There both of them matured into powerful and effective preachers. During their journey they befriended several Moravian members of an association recently renewed through the efforts of Count Nicholas Ludwig von Zinzendorf. John Wesley notes in his diary that, during a severe storm, when the English people on board lost their "cool", the Germans impressed him by their composure and complete resignation to God. He was also impressed with their humility under shameful treatment.

When he returned to England John, through his deep spiritual experiences, as well as the continued development of his skills as a popular preacher, became a national leader. John's famous "Aldersgate experience" took place on May 24, 1738, at a Moravian meeting in Aldersgate Street, London. During the meeting he heard a reading of Martin Luther's preface to the Epistle to the Romans. He penned his now famous lines, "I felt my heart strangely warmed. I felt I did trust in Christ, Christ alone, for salvation; and an assurance was given me that he had taken away my sins, even mine, and saved me from the law of sin and death.", which revolutionized the character and method of his ministry. He was associated at this time with George Whitefield, a man of notable and marvelous eloquence, who preached in open-air meetings and greatly influenced the Wesleys. Nevertheless, they held sharply differing theological views.

In 1751, at age 48, Wesley very unhappily married a widow, Mary Vazeille, who bore no children. Vazeille left him 15 years later.

What John Wesley accomplished in his lifetime borders upon the incredible. At age 85, he thanked God that he was still almost as vigorous as ever! He attributed it, by God's grace, to the fact that he'd always slept soundly, had risen at 4:00 in the morning for 60 years, and for 50 years had preached every morning at 5:00. Seldom in all his life did he feel any pain, care, or anxiety. He preached twice each day, and often three or four times. It's been estimated that he traveled 4500 English miles every year, mostly on horseback.

Methodist preaching became popular only over long years, and amidst severe difficulties and bitter persecutions. This included, in nearly every part of England, stonings and peltings by mobs, even attempts to wound or kill the preachers, to which the civil authorities generally turned a blind eye. The Wesley brothers faced these dangers with amazing courage and astonishing calmness. John Wesley was among the first to preach for slaves rights, attracting significant opposition. Even more hurtful than physical suffering, though, was the slander and abuse heaped upon them by contemporary writers, whose books are now all but forgotten.

Both John and Charles Wesley had been high Anglican churchmen in their youth, and were always deeply devoted to the Established Church. When John found it necessary to ordain preachers (bitterly opposed by Charles), the separation of his movement from Anglicanism became inevitable. The Wesleys and their followers were soon tagged as "Methodists", because of the particular organizing power of their leader and the ingenious methods which he applied. The Wesley fellowship, which after his death grew into what we now know as the Methodist Church, was characterized by an almost military perfection of organization.

The entire management of his ever-growing fellowship rested upon John Wesley himself. He apportioned his days to his work in leading the Church, to study (he was an incessant reader), traveling, and preaching. The annual conference, established in 1744, acquired a governing power only after his death. Charles Wesley's invaluable contribution to the society were his hymns. They introduced a new era in the hymnology of the English Church.

Wesley was untiring in his efforts to disseminate useful knowledge throughout his movement. He planned for the spiritual and educational training of his traveling preachers and local exhorters, and for schools to instruct future teachers for the Church. He himself authored books for popular use on history, church history, and natural history. In this Wesley was an apostle of the proper balance between knowledge and  Christian living. He also published the best of his sermons and various theological works, whose depth and stimulation to thought, still capture people's admiration.

John Wesley was ordinary in stature, but a noble presence. His handsome features endured, even in his old age: an open brow, eagle nose, clear eyes, and a fresh complexion. Persistent, laborious love for human souls, steadfastness, and tranquillity of spirit were his most prominent characteristics. Even amid doctrinal controversies he maintained and exhibited greatest calmness. He was kind and very generous. In the last 52 years of his life, it's estimated that he preached more than 40,000 sermons.
Wesley's untiring efforts were felt not only in England, but in America and throughout continental Europe.

(Source: The original version of The Book of Martyrs (1563) by John Fox, edited by William Byron Forbush.)

Charles Wesley (1707-1788) [photo on the right]
Some have described Charles Wesley as the "first Methodist", pointing out that he was the one who first brought together a group of like-minded Christians to the "Holy Club" at Oxford. Three days before his brother John's famous experience of feeling his heart "strangely warmed", in 1738, Charles had a similar "strange palpitation of heart." Despite their closeness, Charles and his brother John did not always agree on questions relating to their beliefs. In particular, Charles was strongly opposed to the idea of a breach with the Church of England into which they had been ordained. Nevertheless, Charles usually deferred to John's leadership.

Nevertheless, many people today are much more familiar with some of Charles Wesley's hymns than with John Wesley's sermons. Charles not only wrote over 6000 hymns, many still sung today; he was also a poet, in fact, one of the most prolific poets in the English language.

In April 1749, Charles married the much younger Sarah Gwynne, also known as Sally. She was the daughter of a wealthy Welsh magistrate who had converted to Methodism. Sarah accompanied the Wesley brothers on their evangelistic journeys throughout Britain, until at least 1753. After 1756 Charles made no more journeys to distant parts of the country, mainly just moving between Bristol and London.

Charles and Sarah had seven children, but only three survived infancy: Charles, Jr., Samuel, and Sarah, who, like her mother, was also known as Sally. Both Samuel and Charles, Jr. were musical child prodigies and became organists and composers. Samuel Wesley's son, Samuel Sebastian Wesley, became one of the foremost British composers of the 19th century.

Charles Wesley died in 1788. He'd lived and worked in the area around St Marylebone Parish Church and, just before his death, he sent for its Rector, John Harley. Charles told him "Sir, whatever the world may say of me, I have lived, and I die, a member of the Church of England. I pray you to bury me in your churchyard." On his death, his body was carried to the church by six Anglican clergy, and a memorial stone to him stands in the gardens in Marylebone High Street, close to his burial spot.