The Assumption or Dormition of Mary 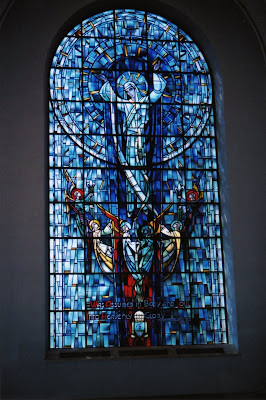 (Window in the Assumption Chapel, St. Charles Seminary, Carthagena, OH
where I was ordained)
The assertion that the Blessed Virgin Mary had been taken up to glory in soul and body is first found in New Testament apocrypha of the 4th century. From the 6th century it gained support among people in both the Eastern and Western Church, and by the end of the 8th century it was generally held, and the feast of the Assumption (in the west), or the feast of the Koimesis = falling asleep (in the East) was observed on August 15. The medieval schoolmen provided theological defense for the popular devotion, though it wasn't considered an "official" teaching of the Church. In the 18th century Benedict XIV classed it among "probable" opinions. At Vatican Council I (1870) a growing desire for an official declaration was evident. This continued until November 1, 1950, when Pius XII declared and defined the Assumption/Koimesis as a dogma of the Catholic Church. The Episcopal Church honors Mary on this day as "St. Mary the Virgin".
Posted by Harry Allagree at 8:02 AM