Mary's Assumption In Light of Women & the Poor 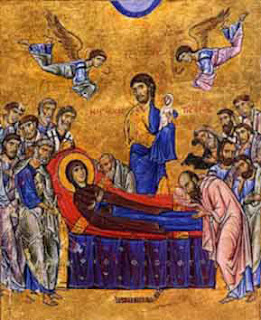 I was in 8th grade when Pope Pius XII, on November 1, 1950, declared the Assumption of Mary a dogma of the Church. Though I don't remember much specifically about the Assumption per se, I do recall that it was a Jubilee Year, and that Mary was honored somehow.

Even later, through my seminary years, I don't recall thinking much about the details of the Assumption teaching. It meant more to me that it was always a feast day, with a grand solemn liturgy, and therefore a free day from the usual summer routine! Like most Catholics and probably all my fellow seminarians, I simply accepted it as the Church's teaching without delving into all the finer doctrinal details.

During my meditation on the Assumption and its implications this morning, I experienced the desire, which many of us must feel at times, for more "information", more details. Of course, I realize that that is isn't possible. Nevertheless, the ancient tradition of the Eastern Orthodox churches' of the Koímesis or Dormition ("falling asleep") of Mary is a lovely "guesstimate" of what might have been the case. Already in the 1st century, the priest/martyr Dionysios the Areopagite wrote about the subject. In the 2nd century, an account of the Dormition is found in the works of Meliton, Bishop of Sardis. The 4th century St. Epiphanios of Cyprus refers to the tradition handed down about Mary's "falling asleep". In the 5th century the holy Patriarch of Jerusalem, Juvenal, told the Byzantine empress Pulcheria: "Although in Holy Scripture there be no account about the circumstances of Her end, we know about them otherwise from the most ancient and credible tradition". This tradition was gathered and expounded in detail in the Church history of Nicephoros Kallistos during the 14th century.

The tradition says that at the time of her blessed Dormition, Mary was again at Jerusalem. Her fame as Mother of God had already spread throughout the land, with varying reactions. She is said to have spent day and night in prayer, and often went to Jesus' tomb, where, kneeling, she offered up incense. In one such visit the Archangel Gabriel is said to have appeared to her and announced her own approaching transfer from this life into eternal blessedness. As a sign, Gabriel entrusted to her a heavenly palm branch. Mary then returned to Bethlehem with her three young attendants, Sepphora, Evigea and Zoila. She summoned Joseph of Aramathea and other disciples of Jesus, and informed them of the impending conclusion of her life here below. Mary also prayed that the Lord would bring the Apostle John to her,  after which the Holy Spirit transported him from Ephesus, setting him alongside that very place, where Mary had already lay down. After praying, Mary offered up incense, and John heard a voice from heaven, closing her prayer with the word "Amen". Upon which, the Apostles, disciples, and the holy Bodiless Powers arrived with haste. The disciples, says St. John Damascene, whose number was impossible to count, flocked together like clouds and eagles around the Mother of God. Seeing one another and rejoicing, the disciples still wondered why the Lord had gathered them together.  St. John the Apostle and Theologian, greeting them with tears of joy, told them that Mary's time to repose had begun. Going in to her, they saw her lying on the cot, filled with spiritual happiness. They greeted her, and told about their being miraculously transported from their places of preaching. Mary glorified God, thanking God for hearing her prayer and fulfilling her heart's desire.

In the meantime, the Apostle Paul likewise appeared in miraculous manner, together with his disciples Dionysios the Areopagite, Hierotheos, and Timothy, as well as others from among the 70 disciples, to witness the burial of the Mother of the Lord. Mary blessed all of them and encouraged them in their faith and hardships in preaching the Gospel of her Son. To each she wished eternal bliss and prayed with them for the peace and welfare of all the world.

At the third hour, as a multitude of candles blazed, the holy disciples, with song, encircled Mary's sick-bed. As she prayed in anticipation of her demise and of the arrival of her longed-for Son, suddenly the inexpressible Light of Divine Glory shone forth. All gathered there became frightened. As though immersed in the rays of the indescribable light, Christ appeared in glory, surrounded by hosts of Angels, Archangels, and other heavenly Powers, along with the spirits of the forebears and prophets. Seeing her Son, Mary exclaimed: "My soul magnifies the Lord, and My spirit rejoices in God my Savior, Who has regarded the lowliness of God's handmaid." Rising from her bed, she bowed down to Christ. And the Lord bade her to come and enter into life eternal. Without any bodily suffering, as though in an joyous sleep, the Most Holy Virgin Mary gave up her spirit into the hands of her Son.

Joyous angelic song ensued, as the Angels accompanied the pure soul of the God-betrothed. Heaven's gates were raised, and meeting the soul of Mary, Mother of God, the Cherubim and Seraphim glorified her with resounding joy. Mary's graced face shone radiant with the divine glory, and from her body exuded a sweet fragrance.

Kissing the all-pure body reverently and in great awe, the disciples were filled with grace and spiritual joy. Through God's power, many of the sick, who in faith and love touched the holy cot, were healed. Bewailing their separation on earth from Mary, the Apostles set about burying her body. The holy Apostles Peter, Paul, James and others of the 12 Apostles carried the funeral bier upon their shoulders. St. John walked at the head of it with the resplendent heavenly palm-branch, and a crowd of other saints and faithful, carrying candles and censers and singing sacred songs, accompanied the bier. The solemn procession went from the Sion-quarter through the city of Jerusalem to the Garden of Gethsemane.

At the start of the procession there suddenly appeared over Mary's body and over all those accompanying it a vast and resplendent circular cloud. The singing of Angels and heavenly Powers, glorifying the Mother of God, echoed that of the worldly voices below, as this radiant circle accompanied the procession to the place of burial.

When the procession reached the Garden of Gethsemane, then amid the weeping and wailing began the last kiss to the all-pure body of Jesus' mother. Only towards evening time were the Apostles able to place it in the tomb and seal the entrance to the cave with a large stone. For three days they stayed at the place of burial, during which time they gave themselves to unceasing prayer and psalmody. As had happened after Jesus' resurrection, the Apostle Thomas had not been present at Mary's burial. Arriving late on the third day, he lay down at the sepulchral cave and with bitter tears asked that he might be given a final blessing of the Mother of God as he bade her farewell. The Apostles, out of pity for him, decided to open the grave and permit him at least the comfort of venerating Mary's holy remains. Having done so, they were all amazed to find in the grave only the cloth wrappings. They were thus convinced of the bodily ascent or assumption of the Holy Virgin Mary into heaven.

As many Native American storytellers commonly say: "I don't know if it happened exactly this way, but I know that it's true!" Though I don't need a "dogma" to tell me so, I believe that God honored the Theotokos (Godbearer) in a preeminent way after her "falling asleep" in death, that she continues to be our Mother in addition to being a special saint, and that she intercedes for us before the Lord.

I also did find a passage from a book by Ivone Gebara and Maria Bingemer, Mary, Mother of God, Mother of the Poor, which is a slightly different, but no less valuable, take on the subject:

"Mary's assumption brings a new and promising future for women. Excluded from Jewish initiation rites because of their anatomy, banned from full participation in worship and the synagogue by their menstrual cycles, for a long time women -- even in Christianity -- subtly or explicitly have been second-class citizens in the world of faith because of the 'inferiority' and the 'poverty' of their bodies.

Mary's assumption, however, restores and reintegrates woman's bodiliness into the very mystery of God. Starting with Mary, the dignity of women's condition is recognised and safeguarded by the creator of that very bodiliness. In Jesus Christ and Mary the feminine is respectively resurrected and assumed into heaven -- definitively sharing in the glory of the Trinitarian mystery from which all proceeds and to which all returns...

The assumption is the glorious culmination of the mystery of God's preference for what is poor, small, and unprotected in this world, so as to make God's presence and glory shine there.

The virgin of the Magnificat, on whose lips is placed the message that God is exalting the humble and casting down the powerful, finds her life confirmed and glorified by the Father of Jesus. Mary's assumption -- seen in the light of Jesus' resurrection -- is hope and promise for the poor of all times and for those who stand in solidarity with them..."
Posted by Harry Allagree at 2:17 PM