A Political Leader With Integrity 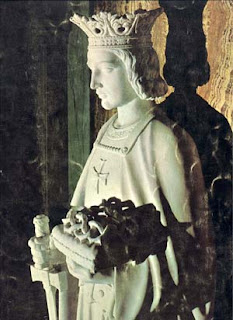 If you haven't read the amazing life story of Louis IX of France, by all means do so. You can find a wonderful summary of it in Fr. John Julian, OJN's marvelous lives of the saints, Stars In A Dark World.

Never slated to be king, the early death of all his brothers fairly shoved him into the position at age 12! Imagine a 15 year old teenager leading the French army to victory, for that's what Louis did, to the admiration of many more seasoned French military men. Add to that a couple of minor Crusades, which didn't turn out too well, and brought illness, and eventually, death to Louis. Even at that, the peasants of France and Prince Edward of England, an adversary, came to his aid, when he needed it, because of the great respect in which they held Louis.

He was apparently a wonderful spouse and father, having married Margaret of Provence and siring five sons and six daughters. More importantly Louis took his spiritual life extremely seriously, not just in words, but in generous deeds, discipline, and continual prayer. He was canonized, the first and only French king, only 27 years after his death, and is honored as the patron of the Third Order of St. Francis.

Prior to Louis' death in 1270, at the age of 56, he left the following living testament for his son, Philip:


St. Louis IX of France’s Last Testament to His Son
Then he [King Louis] called my Lord Philip, his son, and commanded him, as if by testament, to observe all the teachings he had left him, which are hereinafter set down in French, and were, so it is said, written with the king's own saintly hand:

"Fair son, the first thing I would teach you is to set your heart to love God; for unless one loves God he cannot be saved. Keep yourself from doing anything displeasing to God, that is, from serious sin. Contrariwise you should suffer every manner of torment rather than commit a grievous sin.

If God sends you adversity, receive it in patience and give thanks to our Savior...and know that God will make it turn to your advantage. If God sends you prosperity, then thank God humbly, so that you become not worse from pride or any other cause, when you ought to be better. For we should not fight against God with God’s own gifts.

Make your confession often and choose for your confessor a right worthy man who knows how to guide you what to do and what not to do; and bear yourself so that your confessor and your friends shall dare to reprove you in case of any misdoings on your part. Participate in the services of Holy Church devoutly, and without chattering; and pray to God with your heart and with your lips, and especially at Mass when the Consecration takes place. Let your heart be tender and full of pity toward those who are poor, miserable, and afflicted, and comfort and help them to the utmost of your power.

Maintain the good customs of the realm and abolish the bad. Do not be covetous against your people nor burden them with taxes and imposts, save when there is great need of it.

If you have any great burden weighing upon your heart, tell it to your confessor or to some right worthy person who is not full of vain words, and then you will be able to bear it more easily.

See that you have in your company men, whether religious or lay, who are right worthy and loyal and not full of covetousness, and confer with them often; flee and avoid the company of the wicked. Listen willingly to the Word of God and keep it in your heart, and seek diligently after prayer... Love all that is good and profitable and hate all that is evil, wherever it may be.

Let none be so bold as to speak before you any word which would draw or move anyone to sin, or be so bold as to speak evil behind another's back for the pleasure of it; nor should you tolerate any word in disparagement of God and of God’s saints to be spoken in your presence. Thank God often for all the good things bestowed upon thee, so that you be worthy of receiving more.

In order to do justice and right to your subjects, be upright and firm, turning neither to the right hand nor to the left, but always to what is just; and maintain the cause of the poor until such a time as the truth is made clear. If anyone has an action against you, make sure you investigate thoroughly until you know the truth; in this way, your counsellors will learn to judge more boldly according to the truth, whether for you or against you.

If you hold anything which belongs to another, whether by your own act or the act of your predecessors, and the matter be certain, make restitution without delay. If the matter be doubtful, have wise men make inquiry diligently and promptly.

Take care that your servants and subjects live under you in peace and uprightness. Especially maintain the good cities and commons of the realm in the same estate and with the same franchises as they enjoyed under your predecessors; and if anything needs amending, amend it and set it right, and keep all in your favor and love. For because of the power and wealth of the great cities, your own subjects, and especially your peers and barons, and foreigners will also fear to undertake anything against you.
Love and honor all persons belonging to Holy Church, and see that no one takes away or diminishes the gifts and alms paid to them by your predecessors. It is related of King Philip, my grandfather, that one of his counselors once told him that those of Holy Church did him much harm and damage in that they deprived him of his rights, and diminished his jurisdiction, and that it was a great marvel that he suffered it. The good king replied that he believed this might well be so, but that he had regard to the benefits and courtesies that God had bestowed on him, and so thought it better to abandon some of his rights than to have any contention with the people of Holy Church.

To your father and mother give honor and reverence, and obey their commands. Bestow the benefices of Holy Church on persons who are righteous and of a clean life, and do it on the advice of men of worth and uprightness.

Beware of undertaking a war against any Christian prince without great deliberation; and if it has to be undertaken, see that you do no harm to Holy Church and to those that have done you no injury. If wars and dissensions arise among your subjects, see that you appease them as soon as you are able.

Use diligence to have good provosts and bailiffs, and inquire often of them and of those of your household how they conduct themselves, and if any are guilty of the vices of inordinate covetousness, falsehood or trickery. Labor to free the land from all vile iniquity, and especially strike down with all your power evil swearing and heresy. See to it that your household expenses are reasonable.

Finally, my very dear son, please have Masses sung for my soul and prayers to be said throughout the realm. Give me a special share and full part in all the good you do. Fair, dear son, I give you all the blessings that a good father can give to his son. And may the blessed Trinity and all the saints keep and defend you from all evil. May God give you the grace to always do His will, so that God may be honored in you, and that you and I may both, after this mortal life is ended, be with God together and praise God everlastingly. Amen."
Posted by Harry Allagree at 1:37 PM