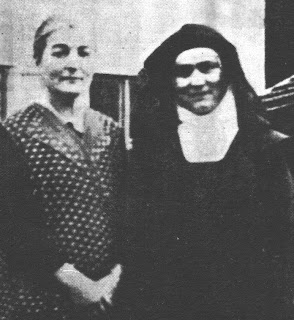 Rosa Adelheid Stein (1883 - 1942 in Auschwitz)
Edith Hedwig Stein [St. Teresia Benedicta of the Cross, OCD] (1891 - 1942 in Auschwitz)
Jewish blood sisters.
Spiritual sisters in the Catholic faith.
Sisters in the Order of Carmel: Edith, as a professed nun; Rosa, as a lay-extern/portress.
Sisters in the Nazi prison camps of Amersfoort, Westerbork, and Auschwitz.
Sisters in death in Auschwitz, August 9, 1942.
Unfortunately, many people aren't aware that there were also other Stein family members who lost their lives in the Holocaust:
- Paul Stein (1872 - 1943), eldest brother of Rosa and Edith, along with his wife, Trude [Gertrude] Stein (1872 - 1943), at Theresienstadt.
- Frieda [Elfriede] Stein Tworoger (1881- 1942), sister of Rosa and Edith, at Theresienstadt.
- Eva Stein (1915-1943), niece of Rosa and Edith, daughter of their brother Arno Stein and his wife, Martha.
Susanne Batzdorff, niece of Rosa and Edith, and daughter of their sister, Erna, writes:
"After all these years, it is still extremely painful for me to think about the tragic end of Rosa and Edith Stein, but I have wondered whether in those days and hours of horror and fear their togetherness may have given them strength and comfort. There is a passage in Jewish liturgy, concerning the slaughter of the martyrs...'Beloved and true were they in life, and even in death they were not divided.' That is how I picture Rosa and Edith. Alone, Edith could have found asylum in Switzerland, but she refused to accept refuge without Rosa, and in the end they met death together..." (Susanne M. Batzdorff, Aunt Edith: The Jewish Heritage of a Catholic Saint, Templegate, 1998)
Do you want to be totally united to the Crucified?
If you are serious about this, you will be present,
by the power of His Cross, at every front, at every
place of sorrow, bringing to those who suffer comfort,
healing, and salvation;
St. Teresia Benedicta of the Cross, OCD
From an unpublished meditation
Posted by Harry Allagree at 4:00 PM