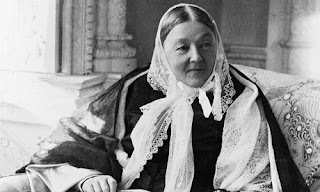 "Today, O Lord, let me dedicate this crumbling old woman to Thee.
Behold the handmaid of the Lord."
(Florence Nightingale)
In the face of opposition from her family, who were very wealthy, Florence chose to train in nursing and steadfastly accomplished her goal. After heading a private nursing institute in London, she distinguished herself through her dedication and loving care of the wounded in the Crimean War, then devoted the rest of her life, despite much personal illness and infirmity, to reforming nursing care. As an Anglican, she was an outstanding example to others in her personal spirituality until her death at 90 years of age.
Canon A. M. Allchin writes of Florence Nightingale: "...It is not easy at this length of time to envisage quite how restricted were the activities of a mid-Victorian lady...although [Florence] herself never became a member, or should one say the superior, of a community, her problems are very similar to those of her contemporaries who in fact entered the Anglican sisterhoods. She was facing all the weight of social convention, and the pitch of her feelings is plain in a private note which she wrote in 1851 [at age 31]:  'Women don't consider themselves as human being at all. There is absolutely no God, no country, no duty to them at all, except family...I have known a good deal of convents. And, of course, everyone has talked of the petty tyrannies supposed to be exercised there. But I know nothing like the petty grinding tyranny of a good English family...'
Greatly disenchanted by organized religion generally, and with the Evangelical wing of the Church of England in particular, her feelings spilled over into strong feelings about the Church itself: 'The Church of England has for men bishoprics, archbishoprics, and a little work [sic!]...For women she has -- what? I had no taste for theological discoveries. I would have given her my head, my hand, my heart. She would not have them. She did not know what to do with them. She told me to go back and do crochet in my mother's drawing roo; or, if I were tired of that, to marry and look well at the head of my husband's table. You may go to Sunday School if you like it, she said. But she gave me no training even for that. She gave me neither work to do for her, nor education for it...'
Nevertheless, she retained a deep Christian faith and received the Eucharist up to the time of her death, and even began writing a book on mysticism. She herself admits in her diary that, during a trip to Egypt in 1849, she had five mystical experiences of Christ. Though she never finished the book, through necessity of caring for her widowed mother after the death of her father, some of what she wrote gives us a sense of what was in the depths of her heart: 'Religion is not devotion, but work and suffering for the love of God. This the true doctrine of the Mystics...Where shall I find God? In myself...I must be in a state for Him to come and dwell in me. That is the whole aim of the mystical life...'
Loving God,...Give power, wisdom and gentleness
to those who follow the lead of Florence Nightingale,
that they, bearing with them your presence,
may not only heal but bless...in the darkest hours of pain and fear..."
Posted by Harry Allagree at 12:56 PM

As a nurse and a woman, I am eternally grateful for all of the gifts and sacrifices that our dear leader Florence Nightingale selflessly gave to us all. She continues to give the nursing profession a guiding light as we continue to define ourselves and our practice.

Thank you for this lovely page of remembrance and respect to her and what she stands for both in the practical sense as well as that of our spirit.