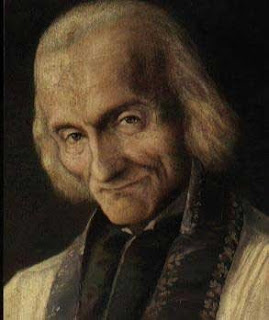 In sending John Vianney, who had barely passed his ordination exams, to the backwater parish at an insignificant town of about 250 people, Ars-en-Dombes, the Vicar-General of the Diocese of Lyons challenged St. John: "There is not much love for God in that parish; you will bring some into it."  Not long after he arrived, a 5 ft. 2 in. skinny man, with thick glasses, clad in a threadbare cassock (which he wore for his whole ministry) and wearing rough peasant shoes, the mayor of the town exclaimed: "We have a poor church, but now we have a holy priest!"

Within 27 years of his arrival at Ars in 1818, as many as 300 people per day were coming to hear him preach and to receive confessional absolution from the famous Curé d'Ars.  Personally, he lived an extremely ascetic life: getting by on four hours' sleep, wearing a hairshirt, privately using a scourge, and existing on one daily meal of potatoes.  By today's standards, he would be considered a very "conservative" pastor, railing against dancing, immodesty, blasphemy, and obscenity. He himself admitted: "If on my arrival in Ars I had foreseen all that I was to suffer there, I would have died on the spot...I thought a time would come when people would rout me out of Ars with sticks, when the Bishop would suspend me, and I would end my days in prison. I see, however, that I am not worthy of such a grace."

In his catechetical instructions, the Curé of Ars reveals the formula he recommended for holiness of life: "...Reflect that a Christian's treasure is not on earth but in heaven. Therefore our thoughts should turn to where our treasure is. Ours is a noble task: that of prayer and love. To pray and to love, that constitutes the greatest possible happiness for us in this life. Prayer is nothing less than union with God...My children, I know your hearts are small, but prayer will enlarge them and make them capable of loving God...It is my belief that if we were to speak to God out of a living faith and a pure heart, we should receive all we ask..."
Posted by Harry Allagree at 11:38 AM