The Call Which Sets Us Free 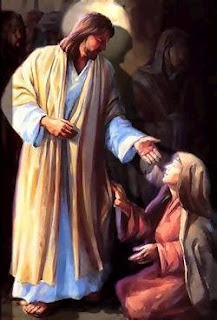 There's never a time when God isn't calling us.

Jeremiah experiences it, in the first liturgical reading for today (Jeremiah 1:1-10). The Epistle to the Hebrews (12:18-29) refers to our hearing God's call. In Luke's Gospel passage (13:10-17) a crippled woman is literally "called over" by Jesus who addresses her affliction without her saying anything first. When one receives a call from God, the author of Hebrews strongly suggests, "See that you do not refuse the One who is speaking..."

And God always calls us at the most inconvenient times! For Jeremiah, it was as he was blossoming into becoming a teenager.  Probably had the changing voice, chin fuzz, pimples and everything! Now God wants him to go be a prophet to a bunch of stiff-necked people who, Jeremiah rightly suspects, are ready to eat him alive. As in several other familiar dialogues in Scripture between God and someone who's trying to talk himself out of a call, Jeremiah objects, raising the "age card". In fact, in most of our contemporary translations, which begin with maybe an "Ah...", we don't really get the full flavor of Jeremiah's  youthful response as the Hebrew text [ahah = a painful exclamation, Oh!]  and the old Catholic Douay-Rheims version ["Ah, ah, ah..."] render it. In essence, he's stuttering: "I'm only a boy!", in fact, probably a teenager. And God, in God's accustomed patient, gentle way, responds: "Don't be afraid...I am with you to deliver you." Jeremiah continues the narrative: "...Then the Lord put out his hand and touched my mouth; and...said to me, 'Now I have put my words in your mouth..." Who could say "No" to that, teenager or adult?!

The woman of the Gospel's call came in the inconvenient moment of her being "bent over", "unable to stand up straight", and this "for eighteen years". Any guesses as to how she was looked upon and treated in her society? Or how she looked at herself all those years? Luke gives us no indication of her age. If afflicted in childhood, she was probably a young woman. If she became disabled in her young adulthood, she'd probably be middle-aged. If her misfortune happened later, she may have been of a more "mature" age. Whatever it might have been, she was probably soon taken for granted, perhaps left out of group activities, perhaps looked down upon by some or made the butt of jokes. In any case, she didn't have an easy go of it.

And now, this teacher from Nazareth, calls her forth, aloud, while he's teaching in the synagogue.  Within a matter of a sentence, "Woman, you are set free from your ailment...", she's cured and, Luke says, "...immediately she stood up and began praising God." "...you are set free..." Can you or I imagine how those words registered in her when she heard them?! And what was that motivated her to react at once with praise: habit?? emotional impulse?? Luke interposes a note of Jesus' ongoing difficulties with "religious" people. The synagogue leader feels obliged to affirm who's in charge here by "reminding" the congregation that the rule book says to come for healing only during office hours, "not on the sabbath day". Without missing a beat, Jesus firmly confronts the leader and others with their hypocrisy, much to the sheer delight of the rest of the congregation. First, he heals this lady of their community, then he puts those self-righteous synagogue officials in their place. What's not to approve by "rejoicing at all the wonderful things that he was doing"?

Other than the fact that Luke notes that the woman "began praising God" immediately after she was cured, we don't know how she responded to the rest, especially to what Jesus said about her in his reprimand to the hypocrites: "And ought not this woman, a daughter of Abraham...be set free from this bondage..." To simply be publicly acknowledged as a woman by a man, and in the confines of the synagogue no less, was really something in Jesus' day. But to speak of her as a "daughter of Abraham" was to publicly point out the dignity of her call as a bearer of God's own promises, given previously to her forebear, Abraham, father of her people, and handed on to her. What greater honor could there be for a Jewish woman?!

The object of God's call to us and of the ministry to which we're called for others is always to set free. Jeremiah the teenager did it, at great personal cost, as he himself tells us, but he did it. We'll never know, until heaven, whether the healed woman followed through on her call or what she did. But I'd lay down money that she went out and did a good share of people setting free. As for you and me: "See that you do not refuse the One who is speaking..."
Posted by Harry Allagree at 8:57 PM