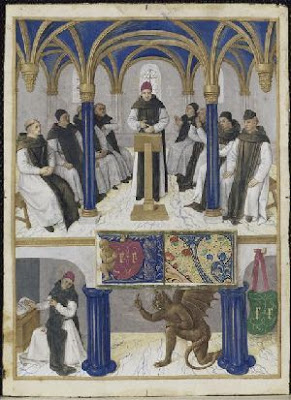 Recently a graduate student in anthropology told his project colleague, contemporary theologian and writer Dr. Stanley Hauerwas, that when he's asked by colleagues what it was like to write with Hauerwas, he commented that it's not easy because, in his words, "Hauerwas only knows how to write Christian." The same could surely be said of St. Bernard of Clairvaux, one of the 12th century's most outstanding figures. In his voluminous sermons/writings you'll notice that practically every phrase emanating from his lips or pen is a composite of Christian Scripture lines. He does it so effortlessly that it leaves one astounded, and convinced that this can only be the fruit of many hours of "living with" Scripture.


For all his greatness, the Roman Breviary tersely summarizes Bernard's life, writings and activities in a mere 10 lines! Bernard was born of a distinguished family in Burgundy, and was from a young age diligent in cultivating Christian virtue. At 22 he entered the Benedictine monastery of Citeaux, where an Order, called the Cistercians, had been founded in 1098 by a group of monks from Molesme Abbey, who wished to follow the Rule of St. Benedict more closely. The leaders were St. Robert of Molesme, the first abbot, St. Alberic, the second abbot, and St. Stephen Harding, the third abbot. Bernard, despite his youth, convinced four of his own brothers to enter Citeaux, along with 27 others: a particular delight to Abbot Stephen, since the Order, noted for it rigorous austerity, hadn't attracted any novices for some years. Three years later, Stephen sent Bernard, with 12 other monks, to establish a new monastery in a desolate, God-forsaken place called the Valley of the Wormwood, though eventually it came to be known as Clairvaux = Bright Valley. St. Bernard remained the abbot here for 38 years.

When you look at what Bernard accomplished in his 63 years of life, it's quite astounding, given his  physical and psychological limitations.  To say that he "overdid" it with bodily austerities, to the detriment of good health, would be putting it mildly. He suffered continuously throughout the rest of his life because of it. He had such serious gastric problems that a hole was dug near his abbot stall so that he could regurgitate without having to leave choir. As Fr. John Julian puts it: "...because of his stomach problems, his halitosis was horrendous. In modern terms, he seems to have suffered from pyloric ulcers, neuralgia, abdominal spasms, cramps, intestinal blockage, and myasthenia gravis." (Stars in a Dark World, p. 446) Yet, by God's grace and his own perseverance, he held it together enough to become a truly holy man, which he himself once described as "...[one] seen to be good and charitable, holding back nothing for himself, but using his every gift for the common good."

Bernard loved his community of monks (which eventually grew to a house of 700!) and through his example of humility, mercy, kindness, prudence, and constant zeal for prayer and contemplation, he led them to live balanced lives according to the Rule and monastic discipline. His sermons frequently reflect his loving concern for them and their own problems. Through Bernard's leadership and efforts, the Cistercians grew from three houses to 500 houses, spanning an area from Ireland to Germany.

The Mellifluus (honey-mouthed) Doctor of the Church, as Bernard is called, wrote voluminously, and as the Breviary points out "it is apparent that his teaching was more the gift of God than the result of any efforts of his own." Bernard was often sought out by great princes, civil and ecclesiastical, to arbitrate disputes and to arrange ecclesiastical affairs. Some see his support of two Crusades as a blot upon his character, though his intentions seem to have been good.

Bernard fell gravely ill in 1152, and as the end of his life, the next year, approached, he said to his monks: "I bequeath to you three things to be observed...charity, humility, patience -- these are the three things I leave you."

In his beautiful Commentary on the Song of Songs Bernard says: "...Now it is clear why there is always this sort of change in the soul. It is caused by the coming and going of the Word. He himself has said: 'I am going and I am coming to you'. And: 'A short time and you will not see me, and a short time and you will see me.' A short time and another short time! How long such a short time is! O good Lord, tell me how can any time be short in which we do not see you? With all due respect for this saying of my Lord, this time seems to me long and unduly extended. Yet both viewpoints are correct. The time of his absence is short for our deserts, but long for our desires...

Thus, fearless and without shame, the soul calls the Word back, boldly seeking his delights and with easy freedom calling out to a lover rather than to the Lord, saying: 'Return, my loved one.'...

But now you must bear with my foolishness for a moment. As I promised, I wish to speak of how this happens in my own case. It is for your benefit that I speak about myself even though it is not good to do so...I admit, in all foolishness, that the Word has visited me many times. When he enters I do not usually advert to his coming. I sense that he is present and I remember that he had been absent. Sometimes I have been able to anticipate his entry, but I have never been able directly to experience either his arrival or departure. I confess that I am ignorant of where he comes from when he enters my soul, and where he goes when he departs. I do not know the manner of his entry, nor how he leaves. This is in accordance with the text of Scripture, 'Nobody knows whence he comes or where he goes to.' This should occasion no surprise since he is the one of whom it is said: 'Your footprints shall not be known.' He does not come in through the eyes, for he has no color; nor through the ears, since he makes no sound. It is not through the nose that he comes; he does not mingle with the air, but with mind; to the atmosphere he give being not odor. Nor does he gain entry through the mouth, because he is not food or drink. He cannot be experienced by touch, since he is impalpable. How then does he find entrance? Perhaps he does not enter at all as he does not come from outside and is not to be identified with any external object. On the other hand, he does not come from inside me: he is good and I know there is nothing good within me.

I ascended to what was highest in me and, behold, the Word loomed loftier. Earnestly I explored the depths of my being and he was found to be yet deeper. If I looked outside, I saw him beyond myself. If I gazed within, he was even more inward. It was then that I realized the truth of what I had read: 'In him we live and move and have our being.' Happy are they in whom dwells the One by whom they live; happy they who live for him and are moved by him!..."