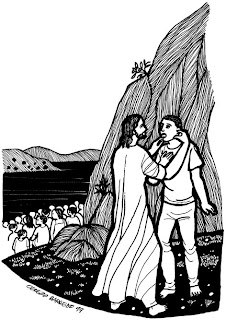 Fred Borsch, retired Bishop of Los Angeles, wrote the following piece, some twenty years ago, in his book, Power in Weakness:
"I know a man who began to appear from time to time at public functions of the theological seminary whre I once taught. In part he seemed attracted to the school because of the newspapers and the library. Maybe he came because other people were there, although for many months he showed no interest in them. He often behaved strangely...People would actually back away from him. Some wanted to have him arrested.
He would not speak to me even when I spoke to him. Once or twice I caught him sitting down and sat opposite him and asked a few questions. He would not or could not respond...
Although he seemed from time to time to mumble to himself, I never saw him talk to anyone. I was not able, in my sporadic efforts, even to hold his glance. I began to realize that he was very frightened, though he also had the cunning and daring of a beggar.
I thought once or twice about trying to touch him. For a sick, troubled, or despondent person, a touching hand from a pastor or friend can often be a great gift...evn life-saving in a sense...it may have been a very long time since they were touched by anyone in care and love...Physical contact establishes a relationship...through which the power of caring can flow. But I was not able to reach out my hand to him.
Some of the students called him 'Shovel-Mouth'...because of his propensity for showing up at almost every school function where free food was involved...On those occasions he ate with great intensity -- huge amounts of food -- never speaking or looking at anyone...
...[O]ne of the students, by a great effort, had gradually established a form of relationship with him. Eventually she was able to learn his name and something of his background and circumstances. She helped me and others to begin to see the one we know only as 'Shovel-Mouth' as a person...
...I tried again. He was shuffling up the street as I was unpacking the back of my car after the Christmas holidays. I do not think he saw me until he was almost even with the car. 'Happy New Year, Tom!" I called out. He looked up, surprised. 'Yes,' he mumbled, 'thank you.' For a flickering moment I also read some form of genuine communication in his eyes. I cannot even tell for sure what it was, only that it was something I had never seen in him before.
The story of Tom does not have any clear denouement. He still does not easily maintain a conversation, and he continues to have his problems. But he learned to talk again, with me and others. Several students try to see that he receives some decent meals. On good days he can sit and share pleasantly with them. He obviously enjoys talking with children. They come to greet him. No one is afraid..."
This story speaks of fear: a fear which led this man to shut down in communicating. For whatever reason that it occurred, it’d been a long time since anyone had touched him, inwardly or outwardly, with any kind of care and love.

J. Barrie Shepherd writes:
When all
is said and done
there’s not much wrong
with fear.
The problem lies instead with
what we fear
and why.
Have you ever asked yourself: how much of my life is spent in fear??
- fear of the unknown or unfamiliar
- fear that I need to change
- fear of saying what I really think or mean, perhaps to my spouse or son/daughter; fear that they’ll reject me for it
- fear of burdening my family or friends, fear of “imposing” on them
- fear of sharing a problem with someone else who could probably help
- fear of people who differ from me: have ideas/beliefs/values/opinions which aren’t like mine; or whose approach to faith or spirituality bears no similarity to my practice.

At one time or another, most all of us have had that kind of fear. And we know that it locks us up inside, makes us as deaf and mute as the man who was brought to Jesus. You could say that we become inwardly blind/deaf/lame/dumb, and find ourselves impoverished, sterile, “dead”. The tragedy is that a person can go on living that way for years, out of fear, adapting as best as one can. Some folks, unfortunately, endure that way for a lifetime, cheated of so much richness, blessedness and joy.

Only when we can learn to be open enough to allow ourselves to be touched by God’s and/or another’s care and love, like “Shovel-Mouth” or Mark’s deaf-mute, and also to reach out to touch others who are in a situation like our own, do the words of Isaiah in the first reading begin to make any sense: “Say to those whose hearts are frightened, ‘Be strong, fear not! Here is your God, He comes...With divine recompense he comes to save you.”

For Isaiah God is the One who touches us in love. The people of Israel were, indeed, a chosen people, but chosen simply because God chose to love them, despite their fears and inadequacies. So any hope which Israel had, as she did through long centuries and much fearfulness, is grounded in God.

The idea that God is the only reason for the people’s hope has powerful implications, for it makes clear that our hope isn’t dependent on our “performance”, or power, or knowledge, or wealth, or anything for lack of which we might fear being rejected by others. It’s the caring, loving touch of God, experienced primarily through the loving touch of another, which can set us free. Blind eyes open; deaf ears become unstopped; lame people can leap and jump again; and dumb tongues joyously break out into words and song. Isaiah uses the image of a cloudburst, flooding the wilderness. Or it’s like arid, dry ground suddenly bubbling up with springs and pools.

The deaf-mute of the Gospel experienced that in his body and soul, through Jesus’ reaching out to him. Mark doesn’t tell us how long the man had had his impediments, but imagine his feelings as people push him forward towards Jesus, this healer, and as Jesus takes him aside. It was common for healers of that day to use rituals such as Jesus used:
putting fingers in the ears, using saliva to touch the tongue. As Jesus does this he raises his eyes and sighs: a sort of outward, audible symbol of the inner release about to follow, then says, “Ephphata”, “Be opened”.

And the man’s ears were opened and his tongue released. The fear left him. His whole body and, indeed, his life had been unlocked. The people recognize Jesus as the Holy One, the One who, as Isaiah had predicted, makes deaf persons hear and dumb ones speak. God, through Jesus, is again the ground and reason for hope and release of God’s chosen ones.

Realistically, as with Bishop Borsch’s experience in trying to reach out to “Shovel-Mouth” who struggled with his fears, we too may not find, in our reaching out to others, any clear resolution. In fact we ourselves may be the ones who continue to struggle with our own fears and with allowing ourselves to be ministered to. But we may also, and, by God’s grace, probably will, have those “flickering moment[s]” when some connection is made, when, even though we don’t know what it is, we experience something which we’d never seen in others or ourselves before, when our inner ears are opened and our tongue is released.