The "Builder of Russia" 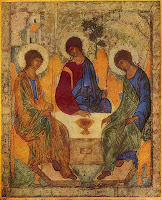 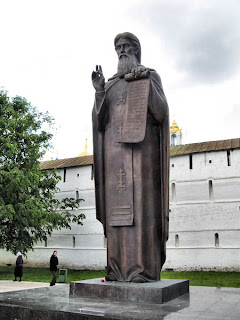 The life story of St. Sergius of Radonezh (1314?-1392) is a classic one of a person who was entirely poor in spirit and open to God from a very young age. He essentially had nothing to offer anyone except himself: a gentle, honest, humble, giving spirit. That openness was like a magnet, drawing people of all ages and social strata, religious and political, to him for advice, counsel and prayer. He was and remains the greatest national saint of Russia.

The Most Reverend Metropolitan Kallistos (Ware) of Diokleia, a titular metropolitan of the Ecumenical Patriarchate in Great Britain, in his noted book The Orthodox Church, first published in 1963, points out two aspects of Sergius' greatness: 1) as a sort of explorer and colonist; and 2) as the catalyst for a new dimension of the spiritual life in Russia.
Intending to be a hermit, Sergius founded his Monastery of the Holy Trinity in the remote wilderness, apart from the civilized world. Yet, as Metropolitan Kallistos says, "what started as a hermitage soon grew into a regular monastery, with a civilian town outside the walls. Then the whole process would start all over again: a fresh generation of monks in search of the solitary life would make their way into the yet more distant forest, disciples would follow, new communities would form, fresh land would be cleared for agriculture..." The disciples of Sergius founded fifty communities just in his lifetime, and the next generation founded forty more!
St. Sergius was also a contemporary of St. Gregory Palamas (1296 - 1359), a monk of Mount Athos in Greece and later the Archbishop of Thessaloniki, and known as a preeminent theologian of hesychasm. Hesychasm, from the word for "stillness, rest, quiet, silence", is an eremitic tradition of prayer in the Eastern Orthodox Church, and some other Eastern Churches of the Byzantine Rite. The practice is based on the injunction of Jesus in Matthew's Gospel to "go into your closet to pray". Hesychasm in tradition has been the process of retiring inward, to the stillness of the heart, in order to achieve an experiential knowledge of God. Sergius was possibly familiar with the Hesychast movement in Byzantium. His biographer, Epiphanius, records visions granted to Sergius in prayer which can only be considered mystical.
Sergius earned the title "Builder of Russia" because politically, he helped Moscow develop as a major center and he had a hand in the repelling of the Tartar threat to Russia; geographically, as mentioned above, it was predominantly his taking the monasteries into the forests that encouraged community-building around them; and spiritually, he profoundly influenced the Russian Church and culture through his own experience and teaching of mystical prayer.
Not only did Russian spirituality overall prosper from 1350-1550, but particularly icon painting, especially among Sergius' spiritual children. It was during this time, in 1410, that St. Andrei Rublev wrote his famous and familiar icon of the Holy Trinity (shown above). For me personally, that icon is the most special. I've found that it has "followed" me around at various points in my life, and I keep a copy of it at the center of my prayer altar here at home. You might want to look at Henri Nouwen's well-known Behold the Beauty of the Lord, with his insightful interpretation of several major icons, including Rublev's.
O God, whose blessed Son became poor that we through his poverty might be rich: Deliver us from an inordinate love of this world, that we, inspired by the devotion of your servant Sergius of Moscow, may serve you with singleness of heart, and attain to the riches of the age to come...Amen.
Posted by Harry Allagree at 11:46 AM