A Modern Lesson in the Cost of Discipleship 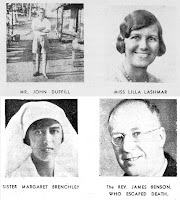 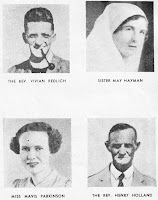 "The Good Shepherd giveth his life for the sheep." Martyrs, like the Good Shepherd, laid down their lives for the sheep because, like him, they cared and loved and were imbued with the spirit of sacrifice which springs out of an unconquerable love, a love which witnesses to God's great attributes of beauty, truth and goodness, even if they have to be attained through much tribulation...They knowing full well the risk, elected to stay with their flock."
(The Most Reverend Sir Philip Strong, Bishop of New Guinea, 1936-1962
in a sermon on September 2, 1981)
Anglican missionaries first arrived on the north coast of eastern New Guinea, at a place near Dogura, on August 10, 1891. Teaching and medical missions were gradually established along the north coast and in the inland mountain villages.
When the Japanese Imperial Army invaded the north coast of Papua in March, 1942, Bishop Philip Strong, Bishop of New Guinea, 1936 to 1962, advised his mission staff to leave for their own safety before the Japanese arrived. Many elected to stay with their people. It is estimated that some 333 church workers of all denominations died for their faith in Papua New Guinea during World War II. Of these, twelve were associated with the Anglican Missions, coming mostly from around Popondetta — at the villages of Gona, Sangara and Isivita. The village of Sangara is slightly to the north of Kokoda, another New Guinea village that features prominently in the Australian history of the war because of the sacrifices made by both Australians and Papuans on the track between Port Moresby and Kokoda — their opposition to the Japanese advance at that time probably averted the direct invasion of Northern Australia.

Among the Anglican Martyrs of New Guinea are:

The latter two, who were killed in the New Guinea Islands, were added to the list of Anglican Martyrs from New Guinea in 1949 and 1992, respectively.

Fr. Matthews and his assistant Leslie Gariadi were killed when the boat they were on was sunk between Port Moresby and Daru and the survivors machine-gunned.

Lucian Tapiedi was axed to death by a collaborator from his own people when he stood up for the missionaries from Sangara and Isivita whom he was accompanying.

The five people who accompanied Lucian were beheaded shortly afterwards on Buna Beach.

The two Gona missionary sisters were bayonetted to death at Jegarata, near Popondetta.

All these deaths occurred around or during August, 1942. Four years later Bishop Strong proclaimed September 2 as the official feast for the Commemoration of the New Guinea Martyrs.
Posted by Harry Allagree at 2:47 PM