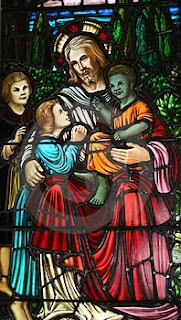 Time after time,
back then,
you heard that word
choose.
Choose partners --
Choose captains --
Choose up sides.

Remember not being chosen? --
or being chosen last?
Everyone waited
for the other side
to take you first.

Everyone politely
pretended
that it didn’t matter.
But there was a
certainty
in your heart
that it did.

They were picked;
you weren’t;
and that mattered
and that hurt.

The story of Jesus
says something very simple.
It says
the simplest,
plainest,
clearest thing
that anyone can ever say
or ever hear.

You are simply
CHOSEN,
period.”

For those of us who are Christian, our belief tells us that every person is chosen, simply chosen, to be a servant of others, with Jesus. To live as a chosen one of God calls for a persistent, radical, obedient faith: a faith that requires standing with him, in his power alone, when the suffering which is inevitable comes to us in our serving.

Fr. Daniel Harrington, a Catholic priest/professor at Boston College’s School for Theology and Ministry, and who is celebrating his 50th anniversary as a Jesuit this year, says in this regard: “When I hear about the sufferings of just people, I am challenged to reflect on their courage and to wonder how I would cope in such a situation. But more important than my self-doubt is the recognition that I belong to a heroic people and a heroic tradition for which principle has often been more significant than any other consideration. I am proud to stand in the tradition of...the anonymous just man of [the book of] Wisdom, Jesus, the early martyrs...and all those who suffer this day for their faith.” I’m not sure how comforting a message that is to Christians who, in fact, live in and are influenced by a largely non-believing, self-reliant American culture which espouses and promotes the principle: “Nice people finish last.”

Wisdom 1:16-2:1, 12-22 spells out such a philosophy of life, which ultimately is really one of death. It details the contrast between fools, which Scriptural wisdom literature also calls “the wicked”, and the wise. This is a favorite theme of the Psalms: the way of the foolish compared with the way of the righteous. The fool’s orientation is to oneself and to one’s own preferences and pleasures. James, in the Epistle, dares to identify the source of such a way of life by the almost quaint phrase “your passions”, “your cravings”.

From the fool’s perspective, nice people always finish last because they don’t get the fact that the aim of life here is basically to have things: good and costly things; to feel good and to have fun, to endlessly pursue whatever “high” is available; and to be somebody important. The weak, the wimp, the “righteous” person deserves to be pushed aside as irrelevant. “...Let our might be our law of right, for what is weak proves itself to be useless.”

Following Jesus the Christ, as he bids us, is a hazardous enterprise! A person who does that, you see, is inconvenient; he/she is a reproach, just by who he/she is, an obstacle, an accusation. That kind of person is a constant reminder, a reproof, a burden “because his[/her] manner of life is unlike that of others, and his[/her] ways are strange.”

St. James, in Chapter 3:13-4:3, 7-8a, sets in contrast to such jealousy and selfish ambition the image of one who is genuinely wise and righteous. That one, he says, is pure, peaceable, gentle, open to reason, full of mercy and good fruits, without uncertainty or insincerity.

In the Gospel of Mark (9:30-37) Jesus gives us an idea of what that might look like: “If anyone would be first, that one must be last of all and”, more than that, “servant of all.” (For “servant” Mark uses the Greek word diakonos literally “one who runs errands; is an attendant, a waiter”. We call that a “deacon”!) Jesus asks nothing more of you and me than he asks of himself: “I came not to be served, but to serve.” Then, unconcerned about rank or status, Jesus does a truly counter-cultural thing by sitting down and gathering a small child into his arms. In our culture a little child is, for the most part, irresistible, endearing, someone to whom we’re naturally drawn. That wasn’t so in Jesus’ time. Adults were consumed with earning honor, above all else. Honor was a socially acknowledged claim to worth. A grown person might do the ethically correct thing, but if he/she didn’t earn other people’s respect, their honor, or wasn’t acknowledged for whatever reason, that person was a nobody. There were various ways to earn honor: to show bravery, be a brilliant speaker, become a well-respected teacher, or give gifts away -- in other words, to buy one's honor. To serve others was considered the work of slaves. When Jesus was later crucified, for example, that was considered not only an extreme loss of honor: it was the ultimate disgrace. Notice in the reading how Jesus catches the disciples off-guard as they arrive at Capernaum. He quizzes them on what they were wrangling about on the way there. Oh! That...! Mark’s little aside to his readers blows their secret: “...they were silent, for on the way they had argued with one another who was the greatest...”

Getting back to the child, in the Greco-Roman world a child was utterly powerless, totally dependent, without legal rights, completely subject to the authority of the head of the household, lacking any social standing at all. By his action Jesus says that the man or woman who welcomes and accepts an utterly defenseless person, one with no legal rights or claims to anyone’s compassion, one who can’t offer money, who has no prestige, privilege, and therefore power: that man or woman is truly righteous and wise before God. And, in his book, “nice” people always finish first, because in welcoming the needy one, he/she welcomes Jesus as well as the Father who sent him. That means much more than that it’s “nice” to stick up for the underdog. What Jesus is really saying is that it’s exactly there where you take the risk of offering your compassion to a defenseless, needy one that you will look into the eyes of Jesus himself.

But, you see, the fools and the unwise don’t get this, because their passions, their cravings get in the way.
Why do people deliberately cheat and steal, and cause misery in millions of lives when the stock market crashes?? Why do people con others into drug or alcohol addiction or child prostitution, and into all the other miseries associated with that?? Because at the root of every one of these is a passion, a desire, a craving for what I want, when I want it, and how I want it, to put ME before everyone else. St. Augustine, himself a self-willed, long-time student in the school for selfishness, eloquently reflects on it all in his famous Confessions, written when he was between 43 and 46 years old, about thirty years before he died, and his conclusion is this: “You have made us for Yourself, and our heart is restless until it rests in You.”

Though the society in which we live will continue to try to convince the “nice” people that in following Jesus they’ll end up last, the Eucharist which is shared among Christians convinces them otherwise. In Jesus’ resurrection which Christians celebrate together as they participate in Word and Sacrament, they learn through Jesus’ example of giving himself completely to humankind how to become servants, “deacons”. They will not be left out after all. Through the challenging and strange irony of choosing to be last of all and servant of all for his sake, they find themselves first in the lives of the ones they serve, in their own lives, and before God. Simply CHOSEN. Period.

Posted by Harry Allagree at 3:10 PM