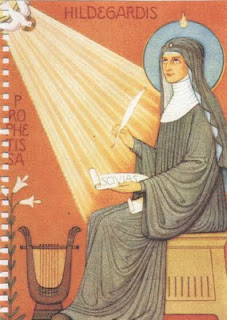 A near contemporary of St. Bernard and William of St. Thierry, Hildegard is called "The Sibyl of the Rhine" because of her vivid apocalyptic visions and prophecies of disaster. Her psychological constitution was somewhat unstable, to put it mildly, and her health poor. Nevertheless, Hildegard used the gifts God gave her with determination and unshakeable courage: she founded two convents, played a significant part in Church politics, endured long traveling jaunts, wrote magnificent hymns, wrote a book on herbs and also her famous Scivias, an account which she dictated of 26 visions she had.
She was given over to religious life as a child, so one can only guess the effect that that had on her: having to be strong when she felt weak, speaking out when she wanted to remain silent. Anne H. King-Lenzmeier, in Hildegard of Bingen: An Integrated Vision, says: "As a prophetess emerging from a life lived mystically, she reminds us that our own situation is not the individual, standing alone, but the individual in the setting of a community and society...She calls us to look beyond the everyday but to value it at the same time. She calls us to see that order in the world is a good idea, but it has to be reflective of a virtuous order, a life rightly lived rightly in community. She calls us to see that in times of turbulence we cannot give up but must stand up for what is central to our very being...She asks us to love life even when it is hard to bear...Now it is our turn to figure out, singly and together, how to bring viriditas ["greenness"] more fully into the world of today and tomorrow."
Words and an outlook on life never more needed than in our present day!
Posted by Harry Allagree at 8:16 AM