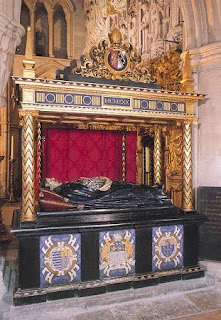 Anyone like Blessed Lancelot Andrewes who befriended the likes of Richard Hooker, George Herbert and William Laud would certainly be a friend of mine!
A truly amazing man by any standard, Andrewes has been described by Rowan Greer, Professor of Anglican Studies Emeritus at Yale Divinity School, as "arguably, the most brilliant scholar the Church of England has ever produced", and by T. S. Eliot as having a place "second to none in the history of the formation of the Church of England". The next time you read from the King James Version of the Scriptures, bear in mind that Lancelot Andrewes, who could read in 21 languages and was fluent in 15, not only largely translated into English the books of Genesis through the 2nd Book of the Kings in the KJV, but also, along with the Bishop of Gloucester, had final authority from King James to review and revise the whole translation before it was published!
Convinced that true theology is based on sound learning, Andrewes is said to have given himself to five hours of prayer daily. One of his pupils and friends, Henry Isaacson, relates that "from the hour he arose, his private devotions finished, to the time he was called to dinner, which, by his own order, was not till twelve at noon at the soonest, he kept close at his book, and would not be interrupted by any that came to speak with him...Insomuch that he would be so displeased with scholars that attempted to speak with him in a morning, that he would say 'he doubted they were no true scholars that came to speak with him before noon'..." Even for an unmarried, reclusive cleric, that's real commitment!
I would love to have attended and/or concelebrated the Eucharist (once a month!) with Blessed Lancelot in his private chapel, which is said to have been outfitted with an altar, candlesticks, two altar cloths, an altar book cushion, silver ciborium, a censer, and five copes! -- But that's just me. I think my friend, Fr. Leo Joseph, OSF, would have enjoyed that, too!
Andrewes was a preeminent preacher, especially at the royal court. He himself spells out a formula that would stand anyone who publicly unfolds the Scriptures for others in good stead: "Let the preacher labour to be heard intelligently, willingly, obediently. And let him not doubt that he will accomplish this rather by the piety of his prayers than by the eloquence of his speech. By praying for himself, and those whom he is to address, let him be their beadsman [i.e., an intercessor] before he becomes their teacher..." He recommends that a preacher "raise to [God] a thirsting heart before he speaks of [God] with his tongue..." He says he prays to "our Lord and Master" to give him "the internal and sweeter doctrine of His own inspiration..." so that he can set forth for his hearers the truth, and that "from this very truth I desire to be taught the many things I know not..." He asks that God "correct me wherein I am (which is human) in error; confirm me wherein I waver; preserve me from false and noxious things; and make that to proceed from my mouth which, as it shall be chiefly pleasing to the truth itself, so it may be accepted by all the faithful..."
Henry Isaacson sums it up thus: "...Of the fruit of this seed-time, the world, especially this land, hath reaped a plentiful harvest in his sermons and writings. Never went any beyond him in the first of these, his preaching...So that he was truly styled, 'an angel in the pulpit.'"
And after having written all this, I have to go and preach at an evening Eucharist in about 3 1/2 hours! Blessed Lancelot, pray for me!
Posted by Harry Allagree at 12:53 PM