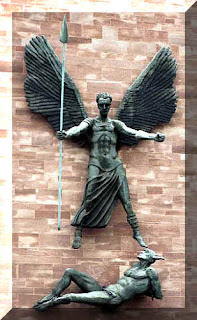 Michael (Hebrew: מִיכָאֵל‎, Micha'el; Greek: Μιχαήλ, Mikhaḗl; Latin: Michael or Míchaël; Arabic: میکائیل‎, Mikā'īl) is an archangel in Jewish, Christian and Islamic tradition. He is viewed as the commander of God's Army. He is mentioned by name in the Book of Daniel, as "one of the chief princes" as well as the advocate of Israel and the "great prince who stands up for the children of your [Daniel's] people"; the Book of Jude; and the Book of Revelation. There is no further mention of Michael in the Hebrew Bible.

The Talmudic tradition rendered Michael's name as meaning "Who is like El?", a rhetorical question, implying the answer, "No one is like God." Much of the late Midrashic detail about Michael was transmitted to Christianity through the Book of Enoch, where it was further elaborated.
In late medieval Christianity, Michael, together with Saint George, became the patron saint of chivalry. In the British honors system, a chivalric order founded in 1818 is also named for these two saints, the Order of St Michael and St George.
The Feast of Holy Michael and All Angels is celebrated on September 29 ("Michaelmas"). Michael the Archangel is traditionally depicted as treading on Satan or a serpent, or carrying a banner, scales, and sword. He is honored in many Christian circles as the patron of soldiers, especially paratroopers and fighter pilots; police officers; the sick; paradmedics; mariners; and grocers. He is also considered the guardian or protector of the Jewish people. The idea that Michael was the advocate of the Jews became so prevalent that, in spite of the rabbinical prohibition against appealing to angels as intermediaries between God and his people, Michael came to occupy a certain place in the Jewish liturgy. There were two prayers written beseeching him as the prince of mercy to intercede in favor of Israel: one composed by Eliezer ha-Kalir, and the other by Judah b. Samuel he-Hasid. In later Jewish writings, particularly in Kabbalistic works, he is viewed as "the advocate of the Jews." Michael is also a patron of Germany and of the City of Brussels. Most Christians refer to him as "Saint" Michael the Archangel. Orthodox Christians refer to him as the Taxiarch Archangel Michael or simply Archangel Michael.
Some believe the numinous "captain of the host of the Lord" encountered by Joshua in the early days of his campaigns in the Promised Land is Michael the Archangel. This unnamed heavenly messenger is of supernatural and holy origin, and likely sent by God. There is some controversy about this, however. In other places in the Bible, angels do not accept the worship of humans; the willingness of this person to accept Joshua's worship implies that he was divine (e.g., a theophany of God). However, it's not clear whether the angel was the subject of Joshua's worship or merely instigated worship of God.

Michael is designated in the Book of Enoch, as "the prince of Israel". Enoch 9:1 mentions Michael, along with Gabriel, Raphael, Uriel and Suriel. Enoch 20:5 speaks of Michael presiding over human virtue in order to command nations; in 24:4-10 Enoch, before the Tree of Life/Mercy, explains to Michael that he should not touch it, for it is for those who are 'elect' after the day of Judgement; Enoch 40:8 says that Michael is patient and merciful; and Enoch 70:11-16 shows that Michael, Gabriel, Raphael and Phanuel always 'escort' Yahweh whenever he leaves his throne.

According to rabbinic Jewish tradition, Michael acted as the advocate of Israel, and sometimes had to fight with the princes of the other nations, particularly with the angel Samael, Israel's accuser. The rabbis declare that Michael entered upon his role of defender at the time of the biblical patriarchs, and refer to Michael as the "one that had escaped" (Genesis 14:13). Michael is said to have protected Sarah from being defiled by Abimelech, announced to Sarah that she would bear a son, and rescued Lot at the destruction of Sodom. It is also said that Michael prevented Isaac from being sacrificed by his father by substituting a ram in his place; saved Jacob, in his mother's womb, from being killed by Samael, and prevented Laban from harming Jacob. According to one source, it was Michael who wrestled with Jacob and who afterward blessed him.
The Epistle of Jude mentions Michael, as well as the book of Revelation, or Apocalypse: "And there was a great battle in heaven, Michael and his angels fought with the dragon, and the dragon and his angels fought back. But he was not strong enough, and they lost their place in heaven." In Catholic teachings, St. Michael will also triumph at the end times when Antichrist will be defeated by him.
According to some Christian theologians, Holy Michael may appear in Scripture where his name is not mentioned: for example, the cherub who stood at the gate of Paradise, "to keep the way of the tree of life"; the angel through whom God published the Decalogue for his chosen people; the angel who stood in the way against Balaam; and the angel who routed the army of Sennacherib.

It may have been natural for Michael, the champion of the Jewish people, to become the same for Catholic Christians. Early Catholics, however, regarded some of the martyrs as their military patrons. To Holy Michael they entrusted the care of the sick. In Phrygia (modern-day Turkey), where Holy Michael was first venerated, his prestige as an angelic healer obscured his role in military affairs. From early times Holy Michael was said to have caused a medicinal spring to spout at Chairotopa, near Colossae, where all the sick who bathed there, invoking the Blessed Trinity and Michael, were cured. At Constantinople likewise, Michael was honored as both a warrior and a great heavenly physician. His principal sanctuary, the Michaelion, was at Sosthenion, some 50 miles south of Constantinople. He supposedly visited Emperor Constantine the Great at Constantinople, intervened in assorted battles, and appeared, sword in hand, in Italy over the mausoleum of Hadrian, in apparent answer to the prayers of Pope St. Gregory I the Great that a plague in Rome should cease. In honor of the occasion, the Pope called the mausoleum Castel Sant'Angelo = Castle of the Holy Angel, as it is still known today. The sick slept in this church at night to wait for a manifestation of St Michael.
In Normandy, Michael is the patron of mariners in his famous sanctuary at Mont-Saint-Michel in the Diocese of Coutances. He is said to have appeared there, in 708, to St. Aubert, Bishop of Avranches.

In Germany, after its evangelization, Michael replaced the pagan god Wotan for the Christians, to whom many mountains were sacred; hence the numerous mountain chapels of Holy Michael all over Germany.
In art Michael is represented as an angelic warrior, standing over the dragon whom he sometimes pierces with a lance, fully armed with helmet, sword, and shield which often bears the Latin inscription, "Who is like God?". He also holds a pair of scales in which he weighs the souls of the departed, or the Book of Life, to show that he takes part in the judgment. Michaelangelo depicted this scene on the ceiling of the Sistine Chapel.
In Arabic literature, Michael is called Mikha'il. In the Qur'an, Michael is mentioned once only. In the English epic poem Paradise Lost by John Milton, Michael commands the army of angels loyal to God against the rebel forces of Satan.
Posted by Harry Allagree at 3:28 PM