A Reflection on Jesus' Hard Sayings 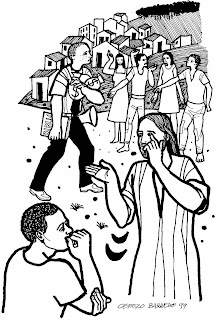 When I visited a parish in Chester, England about 15 years ago, they were in the midst of a series of sermons, given by lay preachers, called “The Hard Sayings of Jesus”. I remember thinking how brave those folks were in tackling such a project. It’s hard to talk about such sayings as Mark records in the Gospel assisgned for today’s liturgy (Mark 9:38-50), much less to understand what in the world Jesus is really trying to tell us!

A commentator on this passage whom I discovered recently, and who is well-versed in the ideas and theories of French historian, philosopher, and literary critic, René Girard, says he has a hunch that Jesus is actually employing some dark humor in this Gospel passage. There’s a terribly serious point which Jesus is making, to which we need to pay close attention. But Jesus’ use of dark humor to make the point should also alert us to keep that in perspective. Just as a sidebar: one of the ideas which René Girard has developed is something called mimetic desire. Mimetic is related to the word mime or to imitate. The word desire is fairly understandable. So, mimetic desire would indicate that we imitate, we mime, the desiring of other people.

To understand how this connects to today’s Gospel, recall what Mark records in Chapter 9:30-37: the disciples have a conversation on the way to Capernaum, about which Jesus confronts them later, only to find out that, as Mark says, “they had argued with one another who was the greatest...” Jesus then reminded them that the “greatest” needs to become “last of all and servant of all.” In other words, Jesus reminds the disciples that many of our troubles -- on the personal, regional, national, or global level -- arise from this very process of catching our desires from each other, learning to want the same things, and in the process, competing with one other, which generally leads to selfishiness and conflict, and even violence sometimes. Scripture uses the word covet, as in “You shall not covet your neighbor's things.” The focus is on our brothers/sisters, from whom we learn to desire.

How often we think that we can’t find anything desirable unless we crave what others demonstrate to us to be desirable. It’s the same principle which is at work in Genesis 3: the story of the man and woman and the serpent in the garden of Eden. God tells the man and woman not to desire eating the tree in the middle of the garden, and they obey, at first. But eventually, the fruit becomes more and more desirable, because the serpent shows the woman what to desire, and she, in turn, shows the man. Mimetic desire.

The Genesis story, however, has an even more tragic element. The most direct way to show the woman and man the desire would have been for the serpent to take a piece of the fruit himself, which the woman later actually does, before handing it to the man. The writer of Genesis, however, says that the serpent, the most subtle and crafty creature in the garden, makes the fruit desirable with a classic “Madison Avenue” technique: by “selling” the woman on believing that the most glamorous, powerful, trustworthy person in the world, namely God, finds the fruit desirable! “You will not die; for God knows that when you eat of it your eyes will be opened, and you will be like God...”

The tragedy here is that instead of keeping their hearts set on God, trusting that God would provide all that they need, as God had assured them, the man and the woman begin to doubt God. “Is God maybe holding out on us?” “Might God be keeping back the best fruit from us?” The man and woman now become rivals with God, competing with the Divine, and so they act on their desire. The result is that they can no longer remain with God in the Garden. As the story continues to play out, the ultimate fruit of their rivalry, which they pass down, is an ongoing and growing resentment and anger, until one of their sons becomes a murderer. Brother kills brother. Resentment, anger, conflict, violence, death. It’s their story and the story of each one of us since then. Desire becomes distorted, and continually results in a repetitive process of rivalry, one-ups-man-ship, and eventually violence. Children catch it from their parents, and all end up stumbling and falling.

It could be that in today’s passage Jesus is trying to take a somewhat humorous, perhaps even tongue-in-cheek, approach to these terrible images of hell fire, using an example of mimetic desire and rivalry. The disciples, who have previously struck out in their attempts to drive out demons, had come upon someone else who’d obviously had better luck at casting out demons in Jesus' name. That didn’t go down well with them at all: “...we tried to stop him...” Obviously jealous and envious, they couldn’t stand the success of this other person “because he was not following us...”

Is it possible that the disciples’ reaction struck Jesus as so pathetic that he had to laugh?! Which could explain why Jesus continued by demonstrating what they were doing, but in a darkly humorous way: i.e., the stuff about making little ones stumble and having a millstone around your neck; about your hand or foot or eye making you stumble, so you cut it off. It’s definitely dark humor because it indicates how serious things really are. It helps us appreciate the seriousness involved in making “one of these little ones”, a sister or brother, stumble and fall; and, even more so, in sometimes setting examples as adults which lead our own children to stumble and fall. The consequences of all this stumbling into sin, Jesus hints, are the fires of violence. Mark’s Greek word, géenna, Gehenna, which we translate as hell, refers to the "valley of Hinnom", a place where, in ancient Israel, child sacrifice, the burning of children on an altar, had been practiced. The fires of violence, Jesus hints, isn’t a place that God has created for us, but rather what we create for ourselves. The fire of our own human cravings and competitiveness and even violence, our desire and selfishness to have what others have, and even more; our willingness to do anything to get that, even if it means depriving another or cutting off another, or causing a brother or sister to stumble: that is the hell we create. Jesus says that we might as well cut off our hand or foot, or cut out our eye, if that's where we're going to end up, because that would be a more humane sacrifice than putting “one of these little ones” on an altar and burning them.

Could it also be that Jesus uses these words of dark humor, not to be taken literally but, perhaps with a grain of salt, so that he could offer us another way out, a totally different kind of sacrifice. Jesus, in dying on the cross, allows himself be cut off from us and from God, to be thrown into the sacrificial fires of our violence. Jesus trusted and hoped enough that God wouldn't let him stay cut off, and rightfully so. Jesus, one-ed as he was in faith to God's self, became the way in which you and I could become reconnected, one-ed again with God. "I am the vine, you are the branches. Those who abide in me and I in them bear much fruit, because apart from me you can do nothing. Whoever does not abide in me is thrown away like a branch and withers; such branches are gathered, thrown into the fire, and burned." (John 15:5-6)

Notice the same image for the consequences of not being connected with God through Jesus: being gathered up and thrown into the fires of our own violence. The Good News is that in being connected, one-ed, to the true vine who is Christ, we finally experience God's loving desire coming to fruition in us and for us. This is our way out of the stumbling block of our distorted mimetic desire, out of our passing this along to our children and to others.

The great 14th century mystic, Julian of Norwich, in her Revelations of Love, speaks eloquently about our human situation of constantly rising and falling, and of our being one-ed in Jesus by his great mercy. Towards the end of her books she says:

“If there is any such one alive on earth who is constantly kept from
falling, I know it not, for it was not shown me.

But this was shown:
that whether in falling or in rising
we are ever preciously protected in one love.
In the sight of God we do not fall;
in the sight of self, we do not stand --
and both of these are true as I see it, but the way our Lord God
sees it is the highest truth...

But our good Lord wills always that we see ourselves more from the
point of view of the higher
(but not give up knowledge of the lower)
until the time that we are brought up above,
where we shall have our Lord Jesus for our reward,
and will be filled full of joy and bliss without end...”