"Sweet Wood", "Noblest of All Trees" 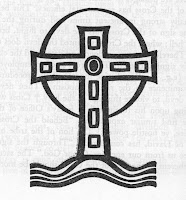 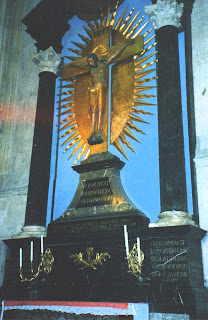 Perhaps the most commonly used Christian gesture by most followers of Jesus and others, especially sports participants, is the sign of the cross. What a lot of folks don't realize is that the ancients expressed the Cross' power in a succinct Greek anagram:
Φ
ΖΩΗ
Ϲ
The vertical word is phos = light; the horizontal word is zoe = life. It's significant, because up until the 10th century the theological emphasis, for the Christian community, was on the saving, life-giving, hopeful character of Jesus' death. Post-tenth century theology largely developed on the dark, gory, suffering, almost despairing elements of Christ's human death, and the necessity of atonement, penance -- sometimes to the extreme -- in order to "merit" salvation.
Thankfully, the liturgy for the feast of the "Triumph of the Cross" or the "Exaltation of the Holy Cross" (originally called the "Invention of the Holy Cross" because of St. Helena's legendary "discovery", "coming upon", the true Cross in the 4th century), coincides with the early Church's positive consideration of the Cross, depicted in the rendering of the cross on the left side above. A curious fact of Christian art is that, up to the 10th century, no depictions of the crucified Christ have been found. The earliest depiction of a crucified Christ in the West, that we know of, is the Gero-Kreuz, the Gero Crucifix which is enshrined in a side chapel at the famous Kölner Dom, the Cathedral in Cologne, Germany.
When I was there in 1998, unaware of it's historical value, I fortuitously snapped a picture of the Gero Crucifix, shown above on the right side. It dates from c. 965-970. The halo and crosspieces are original; the Baroque surround, which looks like a flaming shield, was added c. 1683. It hearkens back to the old Anglo-Saxon style and arises out of that milieu of violence and hardship of everyday life.
The Greek word for "cross" is stauros, originally meaning a "pale", an "upright pointed stake". The common method of executing criminals in the Near East was to strip the person and impale him outside the city walls as a brutal reminder to others. The practice of having a crossbeam, on which to tie or nail the victim, seems to have been added by the Persians and Phoenicians, and it was this method which the Romans adopted in executing Jesus.
The legend of the Holy Cross is just that -- legend. The story which was handed down challenges the mind at times, but who's to question whether some elements are historical or not. Supposedly, after Jesus died on the Cross he was taken down and buried, and the Cross was thrown in possibly in a ditch or a well and covered with stones and dirt. By the way, did you notice that none of the four Gospels explicitly says that Jesus was nailed to the Cross? They all simply say that he was "crucified". John attests to the fact that a centurion stabbed Jesus in the side with a lance, presumably after he had died. Beyond that, Mark and Matthew make no reference at all to his hands and side after the resurrection. In Luke Jesus invites the disciples to "Look at my hands and my feet...Touch me and see." John states that "...he showed them his hands and his side [but not his feet]" in the first appearance after the resurrection. Thomas wasn't there at the time, and when he's told about it he exclaims: "Unless I see the mark of the nails in his hands [no feet here either], and put my finger in the mark of the nails and my hand in his side, I will not believe." A week later Jesus makes a second appearance and invites Thomas to "Put your finger here and see my hands [no mention of feet]. Reach out your hand and put it in my side...", although John never actually says that Thomas did this since he immediately answers, "My Lord and my God!" Very minor point, but interesting!
Some 300 years after Jesus' death, Constantine, not yet a believer, and who ruled Gaul and Britain, gets word that Emperor Galerius has died, and so he hightails it across the Alps (how did they do that?!) to Italy to confront his competitor, Maxentius, who ruled Rome and Italy. It wasn't looking good for Constantine, who was vastly outnumbered in troops: three-to-one, in fact. Some months before, and Constantine himself verified this years later, a cross of light above the sun had appeared to him and his soldiers, along with the Latin words "In hoc vince" = "By this conquer." The next night Constantine had a dream in which Jesus handed him the Chi Rho emblem:

Called the Labarum, it has been traditionally interpreted by the Christian community as the first two Greek letters of Christos = the Anointed One. The Romans had actually used it on at least one coin of a pagan emperor to denote chreistos = good/worthy/kindly/benevolent one. For obvious reasons, Constantine the Great may not have had the purest motives for adding it to all his and his troops military helmets and shields!
Constantine defeated Maxentius, amazingly, at the battle of the Milvian Bridge in October, 312, thus becoming the Western Roman Emperor, and 12 years later, after defeating the Eastern Emperor, Licinius, became the top gun of the whole Roman Empire, moving 11 years after that to Byzantium, rebuilding it and renaming it Constantinople.
Supposedly, St. Helena, Constantine's mother, virtually stumbled upon the remnants of the Holy Cross in Jerusalem in the early 4th century. What was venerated as the "True" Cross was enshrined eventually in the Church of the Anastasis (the "standing up" or Resurrection) which Constantine had built on the site of the Church of the Holy Sepulchre. There is a long history of losses and supposed recoveries of the relics of the Cross over the next eight centuries or more. Many people and places claim to have a "relic" of the True Cross. The old saw I heard quite a bit throughout my seminary days was, "If all the relics which people claim to be of the "True" Cross were gathered together, there'd probably be enough for a hundred crosses!"
The Rev. Dr. Pius Parsch, great Roman Catholic liturgical theologian of years past, beautifully reflects on the Holy Cross in his somewhat dated, though monumental and still valuable, work The Church's Year of Grace. He notes how the liturgy delights in comparing the Cross to a tree, particularly the tree of knowledge in paradise. He refers to the Roman Catholic Preface, slightly modernized currently, which prays: "Lifted high on the cross, Christ gave his life for us, so much did he love us. From his wounded side flowed blood and water, the fountain of sacramental life in the Church. To his open heart the Savior invites all..., to draw water in joy from the springs of salvation..." In a similar vein, using the Holy Week Preface, our Episcopal liturgy says: "For our sins he was lifted high upon the cross, that he might draw the whole world to himself; and, by his suffering and death, he became the source of eternal salvation for all who put their trust in him..." Fr. Parsch further quotes a responsory: "Faithful Cross, noblest of all trees!..."; "O sweet wood, O sweet nails, that held so sweet a burden: save this flock gathered today to sing your praises..."; and a chant: "This is that most worthy tree which stands in the midst of paradise!..."
The Holy Week liturgy, celebrated in the "new" form (which Pius XII had initiated) back in 1952, my first year in the seminary, absolutely captivated my soul. The yearly celebration of the Paschal mystery of Jesus' death and resurrection has continued to remain the center of my spiritual outlook: in preaching, teaching, celebrating Eucharist. When it came time to begin looking for a chalice the year before I was ordained, I spent quite a bit of time perusing various catalogs, both in the U.S. and in Europe. I finally settled on a standard model from the Domgoldschmiedehaus Schwarzmann, in Trier, Rhineland, Germany: a large, heavy and stable, simple cup of hammered silver with a node of small beads and a gold-plated interior. I insisted, however, on some customized features and worked closely with the artist, through many communications, who designed a simple cross and raised-letter text around the bottom of the chalice. I had always been struck by Paul's teaching on the wisdom of the Cross, articulated in 1 Corinthians 1 & 2. But what kept coming back to me during this time was a striking verse in Colossians 1:20: "For in [Jesus] all the fullness of God was pleased to dwell, and through him God was pleased to reconcile to himself all things, whether on earth or in heaven, making peace through the blood of his cross." That seemed to summarize for me what my priestly ministry would be about, particularly as a member then of the Missionaries of the Precious Blood. Unfortunately, the phrase was much too long to fit on the bottom of the chalice, and there was no practical way to adapt it. So I settled on the phrase Sanguis Christi Pax Cordium = Blood of Christ Peace of Hearts, with the simple raised Cross at the middle of the phrase. It still stirs my heart to this day! Although the gold-plate needs to be redone! The best part of the deal back then was that the whole chalice, plus paten, plus the customizing, cost only $200!
As I look back over the 45 years (this year!) in which I've been, in various ways and degrees, ministering to the spiritual needs of people, St. Paul's words in 1 Corinthians 2:1-5 never rang truer: "When I came to you, brothers and sisters, I did not come proclaiming the mystery of God to you in lofty words or wisdom. For I decided to know nothing among you except Jesus Christ, and him crucified. And I came to you in weakness and in fear and in much trembling. My speech and my proclamation were not with plausible words of wisdom, but with a demonstration of the Spirit and of power, so that your faith might rest not on human wisdom but on the power of God..."
Posted by Harry Allagree at 2:08 PM