Pioneer & "Bishop of the Cross" 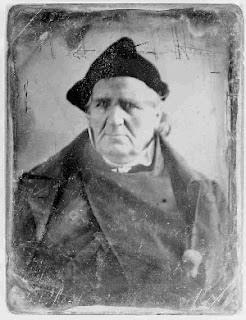 If you want to read an amazing story about sheer determination and fortitude, take a look at the life of Blessed Philander Chase (1775-1852): farmer, husband and father, missionary, bishop, and Presiding Bishop of the Episcopal Church! Being a true, natural-born Ohio Buckeye, I was, of course, fascinated by the fact that Philander was the first Episcopal Bishop of Ohio (and later, of Illinois!), starting out in 1818 with 5 clergy, 8 lay people and no church buildings! Within 13 years, by 1831, he had personally founded 12 parishes, and had raised the equivalent, according to today's standards, of over a half million dollars in England to found Kenyon College and Bexley Hall seminary. Unfortunately, the Diocesan Convention of 1831 edged Philander Chase out because of their perception that he exercised too much single-handed control over the diocesan holdings. It left Bishop Chase understandably bitter, and he continued to publicly decry the "dark conspiracy" which had led him to resign.
Married twice, the first time to Mary Fay, he raised four children, one of whom died early on; Mary died of tuberculosis in 1818. Shortly thereafter he married Sophia May Ingraham, who had a son and daughter of her own. He lost two of his boys to death, one being Philander, Jr. whom he himself had ordained deacon in 1823.
Some of the firsthand accounts of the conditions under which Chase travelled and worked in his ministry rather boggle the mind, particularly as he grew older. Though it may have been true that he was something of a "control freak" when it came to his various projects and dreams for his people, one can hardly question his sincerity, his commitment to the building up of the Church, and his unshakeable faith. Bishop Doane of New Jersey acknowledged this in a comment which he made about Bishop Chase in the House of Bishops in 1835: "A veteran soldier, a Bishop of the Cross, whom hardships never have discouraged, whom no difficulties seem to daunt."
Posted by Harry Allagree at 10:09 AM