The Father I Never Knew 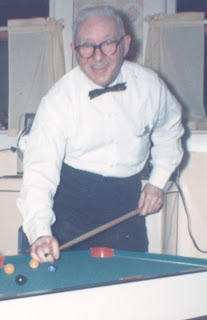 My father, Robert Joseph Allagree, was born the only child of Joseph Allegree, Jr. and Rosa Matilda Mattingly, on August 20, 1904, in Washington, IN. In many of the public records the name “Allegree”, sometimes “Allegre”.

My paternal grandparents, Joseph and Matilda, were married in 1903, in Washington, IN, Daviess County, by Rev. William P. Garrity, likely at the Catholic church in Washington: St. Simon’s Church [possibly SS. Simon and Jude Church]. Grandfather, Joseph, was born in 1868, probably in Orange County, IN. He was 34 when he married Matilda. According to the records of the Brothers of the Sacred Heart, with whom my father later studied, Joseph died “of heart trouble” in 1914 at the age of 45. However, the copy of his death record which I later obtained confirms that he died February 4, 1914, at Washington, IN, of alcoholic poisoning. His age was 45 years, 8 months, and 17 days.

My grandmother, Matilda Rosa Mattingly, was born in 1880, in Washington, IN. According to her second marriage application to Charles Crooks, she listed my Great-grandfather, Alexander, as having been a “teamster”. Matilda’s mother, my great-grandmother, was Laura Ann Summers. For about the last 12 years of her life Great-grandmother Laura was committed to the Southern Indiana Hospital for the Insane, Evansville, IN, where she died in 1900.
Matilda and Joseph were divorced after four years, in 1907. My grandmother lists her occupation in 1909 as “Housekeeper”. Her second marriage, to Charles Daniel Crooks, took place in December, 1909, when she was 26. As to Matilda's death, the records of the Brothers of the Sacred Heart state: “She died of the flu in 1919 at the age of 39.” This is confirmed by her death record, and that she died on March 24, 1919 at Washington, IN. She was buried at St. John’s Cemetery, Washington, IN, along with Charles, her second husband, and his wife after Matilda, Catherine. The grave, however, is marked by a simple ground-level stone which reads “Charles Crooks 1877-1962”. Only after trying in vain, then being guided to one of the community elders of Washington, IN, was I able to find the grave site!

My recollections from this period are vague and sporadic. I don’t actually remember my father at all, even though I have several photos of me with him and my mother between the ages of 4 months and 2 years, all reflecting apparently happy times. Of the 11 pictures of my father which have come down to me, five are of him alone and six are of him with me, either as a baby or young child.

When I was 2 1/2, in 1939, the year that Eugenio Cardinal Pacelli was elected Pope, my father deserted my mother and me. My father had left us, apparently on the pretext of having to go out of town, and promising to send money to Mom, though it quickly became clear that his intention was to leave permanently. He had precollected what his “clients” owed him, and left Mom and me high and dry, absconding with the money.

Here is how I eventually learned that I had four half-brothers and three half-sisters. Though I’d grown up as an only child, I discovered in 1952, my sophomore year at Brunnerdale Seminary, that I probably had a half-brother and a half-sister. I was working in the laundry one day with old Sister M. Liberata, C.PP.S. She asked what my father’s name was. When I told her it was “Robert Joseph”, she said that she’d known two children at St. Joseph’s Orphanage in Dayton with the name Allagree, and she thought that was also their father’s name. I remember telling her that it couldn’t be: “I’m an only child.” It raised a question in my mind, and I couldn’t wait until my mother’s next visit so that I could ask her about it. She finally admitted to me that my father had been married before, that there were two children, Patty and Bobby, that his first wife had died of tuberculosis, and that he had put the children in St. Joseph’s Orphanage, promising to come and get them once he was married again. He never did. Mom remembered him bringing them for dinner on several occasions. On one of my later summer vacations I remember calling my sister, Pat, and having a brief, but pleasant conversation. Inexplicably, we both simply let it go at that.

In 1950 Mom learned that my father was living with a common law wife and had two sons, Bobby Gene and Bobby Joe, whom he’d also recently abandoned. Jean later married a man named Selig, who adopted the two boys, both of whom went by the surname Selig. My father was arrested in mid-April, 1950, in Chillicothe, then transferred to the Montgomery County jail in Dayton because he’d never paid my mother any child support for the previous 10 years. Shortly after he appeared in court and agreed to pay, he disappeared again, and the case was never pursued. Mom felt strongly that someone within the police or legal system had conspired to make this possible.

My oldest sister, Pat, had gone to Julienne High School in Dayton with my Aunt Janie and my Aunt Sue, with whom she graduated. In August, 1988 I asked Janie if she had Pat’s address or phone number. Coincidentally, she’d recently received the latest Julienne alumni book, and Pat was listed. It took me several weeks to work up the courage to call Pat, but I really wanted to know if my father was still alive and where he lived. Pat, I think, was initially surprised when I called, but nevertheless pleased. In answer to my question, she told me that Dad had died in 1973. She told me about the funeral, and later I filled in many more details from various sources.
On a visit to my Allagree family in Chillicothe in August, 2001, I met Steve Hughes, my father's brother-in-law. He told me he had been very close to my father, and that, in fact, was with him when he died. One October 17, 1973 Steve, my father, and my younger brother, Joe, had driven to Columbus. Both Steve and my father each bought a car at an auto sale. Robert had eaten some peanuts and drank a Coke. He asked Steve to follow him back to Chillicothe because he wasn't feeling very well. At one point he pulled over briefly, then continued on. He stopped again, and when Steve got to him he could see that Robert was in distress, and eventually died in his arms. Steve said that a doctor stopped to help, but by that time it was too late. Robert was pronounced dead-on-arrival at Mercy Hospital, Columbus, OH, with a diagonosis of "acute myocardial infarction" and "arteriosclerotic heart disease". What's the old saying? "Like father, like son." It could've turned out that way for me, but luckily I had several good and alert doctors who prevented it.
I had quadruple cardiac bypass in 2002, and made it my mission to survive beyond 69! So far, so good.
In the past 11 years of his life, I'm told by family members, my father really cleaned up his act! He stopped drinking and apparently "got religion" through a TV evangelist from Arizona, The Rev. Willard Wilcox, who came to do his funeral. My father's funeral took place in Portsmouth, OH on October 20, 1973, and he was buried in Lucasville Cemetery, near Chillicothe.
My initial conversation in 1988 with my sister, Pat, had at least answered my main question. But as we talked about Dad and the two families he had, in addition to me, Pat kept referring to “the others”. When I questioned that, she told me that Dad had a fourth wife, Dolores Hughes, and a boy, Joe, and two girls, Julie and Patty Ann. The younger ones had known about me all along, but I didn’t even know they existed.
In 1989 my former wife, Cheryl, and I flew back to Ohio to visit my mother, then 74. My newly-discovered younger brother and sister, Joe and Julie, drove up from Chillicothe to Dayton where we met for the first time, after which Cheryl and I went back with them for a week’s visit with my youngest sister, Patty Ann, their mother, Jean, my father’s last wife of nearly 25 years, and all the nieces and nephews. Several days later Joe took us to visit our father’s grave in Lucasville, OH, where, with deep emotion, I offered prayers for the dead from the Episcopal Book of Common Prayer. I've been there to visit one other time since then. I learned from my family that Robert had known that I was ordained a priest in 1964, and had carried a childhood picture of me with him, which the family gave me. I later wrote and spoke about this visit and its aftermath: “...in 1989, after discovering that I had four half-brothers and three half-sisters, I go to Lucasville, OH, to visit my father’s grave. A week later I dream that he and I meet. In the dream we converse without words, then slowly turn and walk off together. I feel the greatest peace I’ve ever known...”

Posted by Harry Allagree at 3:13 PM