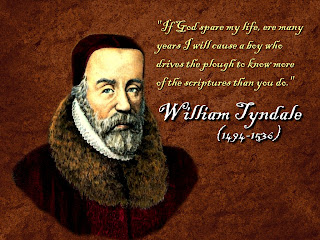 Tyndale is a famous 16th-century Protestant reformer and scholar who, influenced by Desiderius Erasmus and Martin Luther, translated substantial parts of the Bible into the early modern English of his day. He was a gifted linguist, fluent in French, Greek, Hebrew, German, Italian, Latin, and Spanish, in addition to English. There had been a number of partial and complete Old English translations made from the 7th century onward, and Middle English translations, particularly during the 14th century. But Tyndale's was the first English translation drawing directly on Hebrew and Greek texts, and the first to use the new medium of print for wide distribution of his work. In 1535, Tyndale was arrested and jailed in the castle of Vilvoorde, outside Brussels, for about a year and a half, tried for heresy, strangled to death, then burned at the stake.


Early on, Tyndale proclaimed: "If God spare my life, ere many years I will cause a boy that driveth the plough shall know more of the Scripture than thou doest."

Tyndale's Work:
1525 The New Testament Translation (incomplete)
1526* The New Testament Translation (first full printed edition in English)
1526 A compendious introduccion, prologe or preface into the epistle of Paul to the Romans
1528 The parable of the wicked mammon
1528 The Obedience of a Christan Man
1530* The five books of Moses Translation (each book with individual title page)
1530 The practyse of prelates
1531 The exposition of the fyrste epistle of seynt Jhon with a prologge before it
1531? The prophete Jonas Translation
1531 An answere unto Sir Thomas Mores dialoge
1533? An exposicion uppon the. v. vi. vii. chapters of Mathew
1533 Enchiridion militis Christiani Translation
1534 The New Testament Translation (thoroughly revised, with a second foreword against George Joye's unauthorized changes in an edition of Tyndale's New Testament published earlier in the same year)
1535 The testament of master Wylliam Tracie esquier, expounded both by W. Tindall and J. Frith
1536? A path way into the holy scripture
1537 The byble, which is all the holy scripture Translation (only in part Tyndale's)
1548? A briefe declaration of the sacraments
1573 The whole workes of W. Tyndall, John Frith, and Doct. Barnes, edited by John Foxe
1848* Doctrinal Treatises and Introductions to Different Portions of the Holy Scriptures
1849* Expositions and Notes on Sundry Portions of the Holy Scriptures Together with the Practice of Prelates
1850* An Answer to Sir Thomas More's Dialogue, The Supper of the Lord after the True Meaning of John VI. and I Cor. XI., and William Tracy's Testament Expounded
1964* The Work of William Tyndale
1989** Tyndale's New Testament
1992** Tyndale's Old Testament

* These works were printed more than once, usually signifying a revision or reprint. However the 1525 edition was printed as an incomplete quarto and was then reprinted in 1526 as a complete octavo.

** These works were reprints of Tyndale's earlier translations revised for modern-spelling.

New terms which Tyndale introduced into the English language:
Jehovah (a bastardization of the Hebrew "Yahweh" in the Old Testament, composed from the Tetragrammaton YHWH
Passover (for the Jewish holiday, Pesach)
Atonement (= at + onement) meaning "to unite" or "to cover", from the Hebrew kippur
scapegoat the goat that bears the sins and iniquities of the people in Leviticus 16

let there be light
the powers that be
my brother's keeper
the salt of the earth
a law unto themselves
filthy lucre
it came to pass
gave up the ghost
the signs of the times
the spirit is willing
live and move and have our being
fight the good fight
William Tyndale, in his single-minded zeal to get the Bible into English, made a lot of enemies, both in high government and ecclesiastical places, and beyond. Diplomacy was not his forte! Sir Thomas More, the King's chancellor was sicced on Tyndale, and More was verbally vicious on more than one occasion. He particularly accused Tyndale of Lutheranizing the Bible (because of his collaboration with Martin Luther who'd done some translations into German) and of changing certain key terms, such as "bishop" to "overseer", "presbyter/priest" to "elder", and "charity" to love.
Tyndale's answer to More was simple and powerful. In a letter written to John Frith, Tyndale said with regard to all of More's charges of malicious intent and false translation: "I call God to record against the day we shall appear before our Lord Iesus to give a reckoning of our doings, that I never altered one syllable of God's word, against my conscience, nor would do this day, for all that is in earth, whether it be honor, pleasure or riches, might be given me."
Ironically, Thomas More beat Tyndale to martyrdom by one year! Do you suppose they compared notes in the hereafter?! What surprises must have been in store for them both!
Posted by Harry Allagree at 7:08 PM