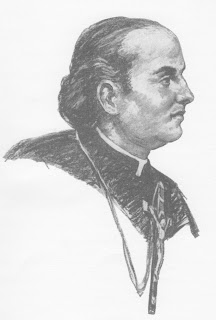 Tomb of St. Gaspar at the Church of Santa Maria in Trivio, Rome
St. Gaspar del Bufalo was the founder of the Missionaries of the Most Precious Blood in Rome. I was privileged to have
made my profession as a member of the Society in 1958 and to have been ordained a priest in 1964. My connection with the Society continues today through the Amicus C.PP.S., a community of former priests, brothers, and seminarians of the Society and their families, which gathers every two years at the Motherhouse in Ohio.
Gaspar del Bufalo was born in Rome, the son of a cook employed by the Altieri family, whose palace was across from the Church of the Gesù in Rome. Through the influence of his mother, Annunziata, he became greatly devoted to St. Francis Xavier, whose relic is prominently displayed on an altar of the Gesù. He was ordained to the priesthood in the diocese of Rome in 1808. Along with other clergy who refused to take the oath of allegiance to Napoleon Bonaparte in 1808 after the deportation of Pope Pius VII, he was sent into exile to northern Italy. Upon his return to Rome in 1814, he considered joining the Jesuits, who had recently been reestablished. However, in view of the needs of the time and in response to Pius VII, he engaged in the ministry of preaching and founded, despite facing considerable difficulties, a society of priests, the Missionaries of the Precious Blood, at the abbey of San Felice in Giano, Umbria, in 1815.
Until his death on 28 December 1837, he worked tirelessly to re-evangelize central Italy, especially the Papal States. He was well known for his eloquence in preaching, his devotion to the poor (especially the Santa Galla Hospice in Rome), and his work with the brigands of southern Lazio.

St. Gaspar's missionary efforts were extremely dramatic. One contemporary, the Passionist priest and bishop St. Vincent Strambi, described his preaching as being "like a spiritual earthquake." He was also a friend of St. Vincent Pallotti, founder of the Pallotines, who assisted at Gaspar's deathbed. He is particularly known for his devotion to the Precious Blood of Christ and for spreading this devotion during his lifetime.

Gaspar had a significant influence on St. Maria De Mattias, foundress of the Adorers of the Blood of Christ (A.S.C.), although it was C.PP.S. Missionary Venerable John Merlini who was most directly associated with St. Maria in establishing her congregation.

Gaspar had given his last mission in Rome at the Chiesa Nuova in 1837. Although in ill health, he returned to Rome from the Missionaries' house in Albano in the fall of 1837 to minister to the sick during the cholera outbreak. He returned to Albano, but returned again at the suggestion of Cardinal Franzoni, the cardinal protector of the Congregation, in December 1837. He died in an apartment in the Teatro di Marcello on December 28, 1837.
His funeral was held in Rome at the church of Sant'Angelo in Pescheria, near the Teatro di Marcello, and he was buried in Albano. Later, his body was transferred to the house of the Missionaries on the Via dei Crociferi in Rome (Santa Maria in Trivio), where it remains today.
Loving God, you made Gaspar del Bufalo a priest and outstanding apostle
of the Precious Blood of your Son. Through his intercession may we
experience the abundant fruits of the price of our redemption. We ask this
through our Savior Jesus Christ who lives and reigns with you and the Holy Spirit,
one God, for ever and ever. Amen.
Posted by Harry Allagree at 5:08 PM